When Pregnancy and Eating Disorders Collide: One Mom’s Story

“The fallacy of control was lost as soon as those two lines appeared on that pregnancy test.” 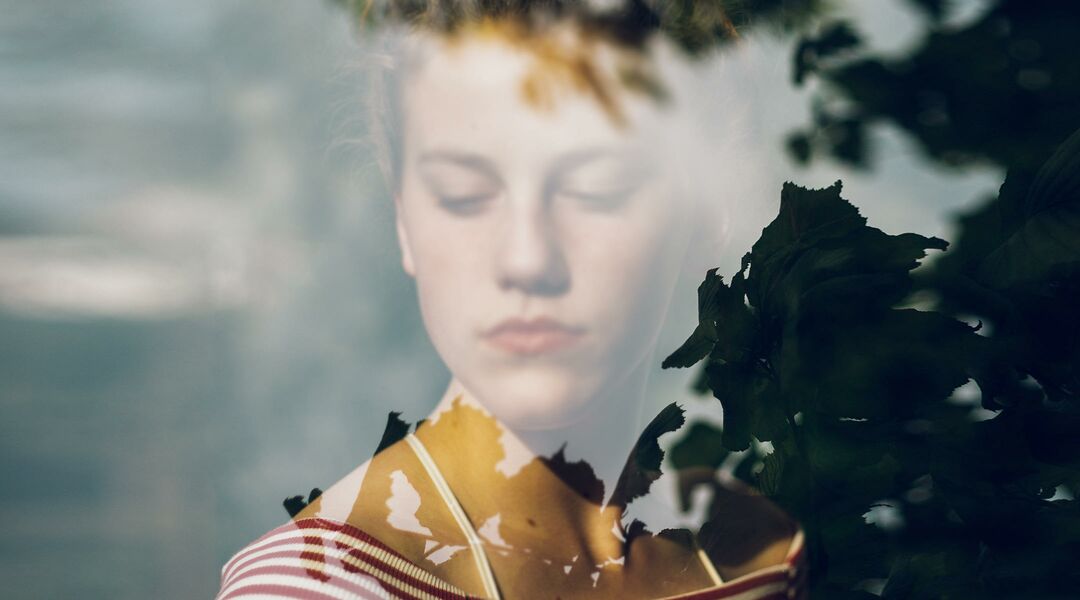 Dena Larsen-Gazeley thought she had her history of eating disorders under control.

At age 8, she began binge eating. In her early 20s, she developed anorexia and bulimia. By the time she got pregnant with her first child at 29, Larsen-Gazeley had found her “perfect balance:” binging and compulsive eating accompanied by excessive exercise as a way to purge. She thought she was in control—of her weight, her pregnancy and her still undiagnosed and untreated eating disorder.

But 15 years and four pregnancies later, her behavior has taken its toll, and her perfect balance proved nearly fatal.

“That’s the irony of an eating disorder,” Larsen-Gazeley, 44, says. “We fight so hard to be in control of our food and our exercise, but really, we’re the slave and it’s the master.”

Binging And Purging Through Pregnancy

“I couldn’t believe we were actually pregnant, and took three tests in the first 12 hours to confirm,” Larsen-Gazeley says of her first pregnancy. “My excitement quickly turned to anxiety and fear over losing the baby.”

Plagued by all-day morning sickness, Larsen-Gazeley realized early on in her first pregnancy that her body was no longer totally under her control. “The fallacy of control was lost as soon as those two lines appeared on that pregnancy stick,” she says.

During each of her four pregnancies, the loss of power over her body only amplified her desire for perfection and control in other areas of her life. She would binge eat, then push herself to work out through exhaustion and morning sickness, even teaching classes as a group fitness instructor.

“Instead of enjoying your pregnancy and relaxing in your body, and feeling the baby move, instead of being able to do that and be present, you’re constantly thinking about what you’re eating, what you shouldn’t be eating, how much you weighed that day, weighing yourself multiple times a day, did you exercise?” she says.

Though Larsen-Gazeley gained between 70 and 90 pounds while carrying each of her four children, which is beyond the recommended weight gain during pregnancy, her doctors never detected a problem. Neither did her closest friends and family, who didn’t see past the “mask of perfectionism” she wore for many years.

“Beyond that mask I was a wreck of anxiety, depression and fear of losing my baby,” she says. “But I didn’t hide my eating disorder, because I didn’t realize I had one. I didn’t know that binge eating was only a different expression of the same disease. I didn’t know that making yourself be sick when you felt nauseous wasn’t normal. I was surviving—I wasn’t hiding anything.”

Eating disorders affect nearly 7,000,000 American women each year and, surprisingly, tend to peak during childbearing years, according to American Pregnancy Association. John Morgan, head of the UK-based Yorkshire Centre for Eating Disorders, has estimated that one in 20 (or 5 percent) pregnant women have an eating disorder. But despite their relative prevalence, there’s a lack of education about eating disorders during pregnancy, says Dena Cabrera, a certified eating disorders specialist and clinical director of Rosewood Centers for Eating Disorders who worked with Larsen-Gazeley during treatment.“It’s really for ob-gyns to ask the right questions,” Cabrera says. “Are you eating consistently? Do you have a meal plan? Do you binge and purge? Do you overeat?”

They’re important questions, because an eating disorder, especially during pregnancy, can have serious health consequences for both mother and baby. “People who are pregnant and have eating disorders have a higher rate of miscarriages, have more difficulty breastfeeding and have lower infant weight,” Cabrera says.

But none of that worried Larsen-Gazeley.

“Honestly I didn’t have any concerns because in my mind, I rationalized that if didn’t restrict my eating, if I wasn’t dieting, then I wasn’t hurting my baby,” she says. “So I allowed myself to binge eat because I wasn’t doing the opposite.”

Luckily, all of Larsen-Gazeley’s babies were born full term and healthy, and she didn’t have any pregnancy complications resulting from compulsive eating, binging, purging or extreme weight gain. Milk production was a struggle for her, but she produced enough to never have to supplement with formula, and breastfed her children until 12 to 17 months.

After each birth, she swung back to the other extreme, severely restricting her food intake and hitting the gym even harder. Some days, she’d wake up at 4:30 a.m. to teach a group exercise class at 5:30, return home to take the kids to school, then run back to the gym for round two, only to do it again in the evening.

After her fourth child was born, Larsen-Gazeley struggled with keeping up the pace of parenting four kids and obsessively exercising. In addition to pounding coffee, Diet Coke and Monster drinks, she added over-the-counter supplements to her diet for a quick energy boost.

At 37, when her children were 2, 4, 7 and 9, Larsen-Gazeley went into organ failure. She was admitted to the hospital and officially diagnosed with a severe eating disorder for the first time. Her doctor insisted she start inpatient treatment immediately.

“I was in shock. I told my husband, ‘That doctor is crazy! You’re not going to believe what he said—I have an eating disorder,’” Larsen-Gazeley says. “I had told him, ‘Yes, I’ve been anorexic, yes, I’ve been bulimic. But I’ve got it all figured out.’”

Letting Go of Perfection Through Recovery

When Larsen-Gazeley agreed to a 10-week inpatient program, it wasn’t because she thought she needed help. “My husband said, ‘If you don’t [get treatment], there is no hope for our marriage.’ And that’s when everything fell out from underneath me,” she says. “I didn’t go to treatment because I felt that I was sick. I went to treatment because I had to save my marriage.” But once in the program, things began to change.

“After getting to treatment, within the first week of being with other people who were having similar struggles, I started to understand how sick I really was, how sick I’d been for a long time, and I started to have hope for change,” she says.

“In treatment, once you level out your nutrition levels, then you can start to really look at those areas in your life where you’re not loving yourself. I had to figure out why? Why do I hate myself so much?” Larsen-Gazeley says.

Today, six years into recovery, Larsen-Gazeley continues to “peel the layers of the onion” through therapy. And through advocacy work in schools, she finds meaning in her experience by sharing her story and letting other mothers know they don’t have to be perfect.

Shortly after coming home from treatment, she realized the extent to which her perfectionism and self-criticism had affected her kids. One of them spilled a glass of milk, and they all froze like deer in headlights, waiting for her to explode.

“When I saw their little faces, and I saw the expectation for perfection that I had put on a 2-, 4-, 7- and 9-year-old, it crushed me in that moment.”

Then she took her glass of milk and spilled it too.

“The relief that came through my four kids in that moment made me know that it was going to be okay. Spilling that milk was my gift to them,” Larsen-Gazeley says. “You know what guys? It’s okay. It’s okay for us to make mistakes.” 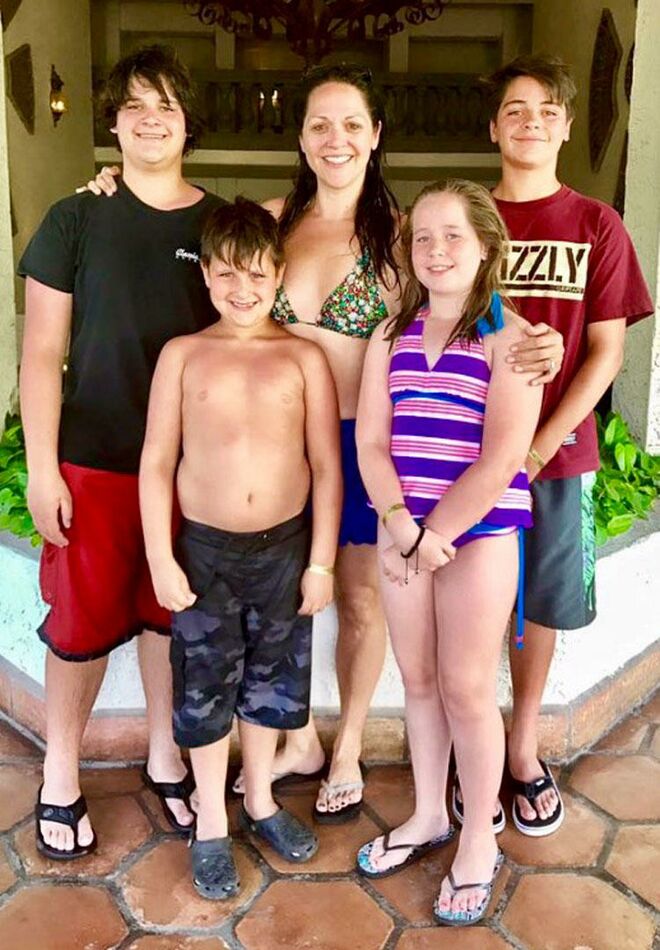