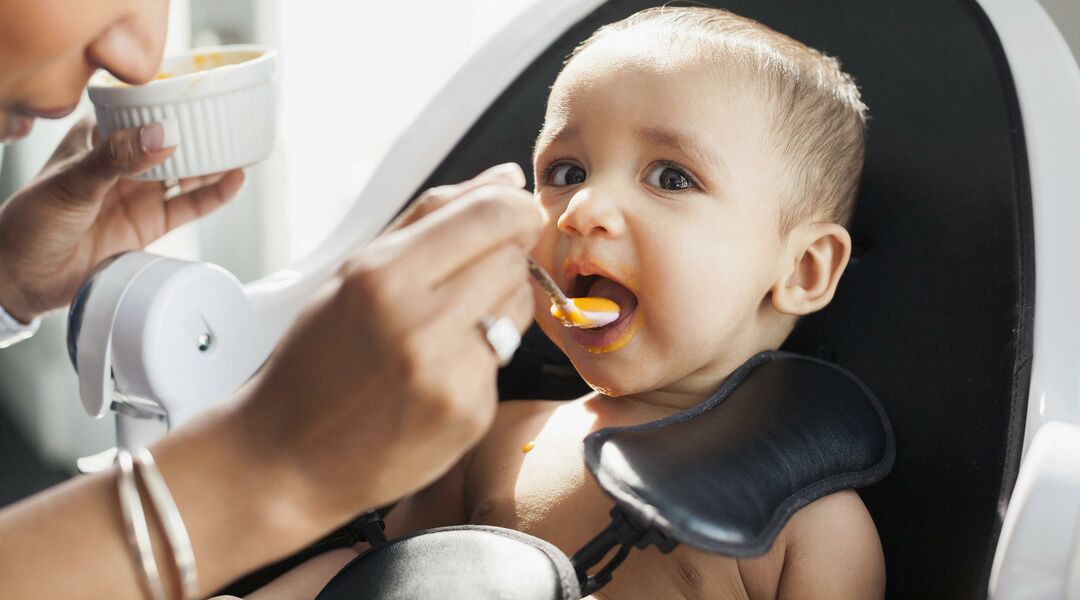 Wondering how you can get baby on track for a healthy and fit lifestyle? The  first solid foods  he eats play a big part. No pressure.

Interested in finding out exactly what American babies are eating, researchers at the University at Buffalo School of Medicine and Biomedical Sciences looked at over 1,500 babies six months to 12 months old.

“There is substantial research to suggest that if you consistently offer foods with a particular taste to infants, they will show a preference for these foods later in life,” lead author of the study Xiaozhong Wen, MBBS, PhD, says. “So if you tend to offer healthy foods, even those with a somewhat bitter taste to infants, such as pureed vegetables, they will develop a liking for them. But if you always offer sweet or fatty foods, infants will develop a stronger preference for them or even an addiction to them."

Whether babies ate healthy foods or fatty foods was strongly tied to socioeconomic status. For example, babies who were breastfed and ate pediatrician-recommended solids typically came from higher-income households — above $60,000 per year — and mothers with varying levels of college education.

On the other hand, babies who consumed more sugar, fat, protein and dairy were associated with household incomes under $25,000 per year and mothers with varying levels of high school education. They displayed faster gains in body mass index scores between six and twelve months than babies with a more nutritious diet, reportedly consuming foods like include ice cream, French fries and sweet drinks.

While dietary patterns are especially hard to change after baby’s first year, Wen is optimistic about the challenge. “We have an opportunity to start making dietary changes at the very beginning of life," he says.

How are you introducing baby to solid foods?