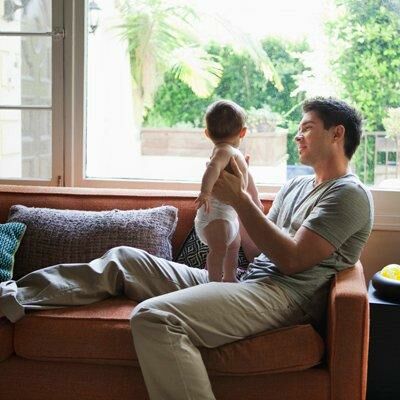 A new study published in the Journal of Family Issues noted that more than half-million dads are staying home with the kids as stay-at-home fathers. The research, conducted by sociologist Karen Z. Kramer of the University of Illinois, noted that when compared to moms staying home with the kids, stay-at-home dads who were not stay at home by choice tended to be older and less educated than moms. Most were also disabled, ill or unemployed. But among men who chose to be a stay-at-home dad, most tended to be higher-income with wives with greater earning potential and had more children under 5.

In the past decade, researchers found, more than 550,000 men were stay-at-home fathers — about 3.5 percent of the married with kids population. In the 1970s, only about 2 percent of that same population belonged to stay at-home fathers. The data was collected from the Current Population Survey conducted by the US Census Bureau and the Bureau of Labor Statistics. The analysis included married couples with children with at least one spouse that worked 35 hours per week. Researchers counted anyone that did not work for pay outside the home as a stay-at-home parent. The findings were consistent with a study published earlier this year by Pew that found the average age of stay-at-home fathers was 41. The Pew research, conducted earlier this year, found that days who stayed home tended to help more with housework than working dads did — and moms who stay home spend more time carrying for the house and child than they do working.

In August 2012, Kramer and her team let out a preliminary report on the findings of the study, saying that in the 70s, dads typically only stayed home if they were disable or couldn’t find work. The trend, since then, has changed. Fathers have the same option that mothers have: Leaving the workforce to care for their children. Of all the families surveyed in 2000, one-in-five had had a father who embraced the stay-at-home life. Following the release of the preliminary details, Kramer wrote, "the change from virtually no fathers reporting that they stay at home to more than one-fifth of fathers (staying) at home… indicates a major shift in domestic and family arrangements. She also noted that some dads who never intended to stay home actually did, and liked it. “Once a family gets into the routine of functioning as a SAHF (stay-at-home-father) household,” she said, “the husband becomes more selective about which jobs he’ll accept, and he’ll only go back to work if he finds something he thinks is appropriate.” The Census Bureau estimated that more than 626,000 men with freelance or part-time jobs were stay-at-home fathers.

Is your partner a stay-at-home dad? Why, or why not?