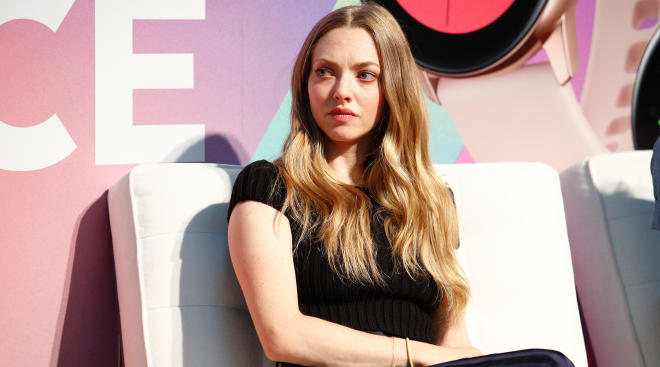 Amanda Seyfriend is speaking out against the unrealistic expectations women put on themselves after giving birth. Her public service announcement comes after she and a good friend, Sophie Flack, were blocked by “semi-influencer” Arielle Charnas after Flack criticized the influencer for sending the wrong message about “bouncing back” after baby. “If we’re ready to get paid for flaunting our lifestyle (and inspiring some in the meantime), we have to be open to the discussions surrounding what we’re promoting,” Seyfried remarks.

It all started when Charnas shared a mirror picture of herself earlier this week. The photo shows the 32-year-old in a bikini with the caption, “proud of my body after two kids.”

There’s nothing wrong with being proud of your body—everyone should love themselves before and after baby. But Seyfried and Flack weren’t big fans of the post because it makes “bouncing back” after baby not only seem simple, but a routine part of postpartum life. As the women point out, the influencer lives a much different lifestyle than the average mom, who would benefit from a bit more transparency from the influencer when she shares photos like these.

After being blocked by the mom of two, Seyfried took to Instagram to share a screen shot of her friend’s comment on the post before they were blocked. “My very smart friend wrote this on a semi-influencer’s feed and she blocked both of us,” she explains. “We have to back ourselves up, not run away from the issues it presents. There are gray areas everywhere. Each of us has a chance to back ourselves, especially on this platform. If you know who you are, take a second to decide if what you’re throwing out there is worth it in the big picture.” She then shared a silly selfie of herself with text written across it saying, “Influence=power. And if you’re taking advantage of that—empower.”

Here’s a snippet of the comment from Flack that Setfried was referring to: “Totally fine that you’re privileged and thin, good for you (I am too-ish!). Got no problem with either of those things. But if you don’t acknowledge how your wealth made your workouts/body possible, you’re just perpetrating the patriarchal (totally unrealistic) notion that mothers should ‘bounce back’ after childbirth, an impossibility for anyone who can’t afford childcare (which is almost everyone in this country).”

Charnas was quick to respond to the criticism with a message of her own on her Instagram stories. “Why am I being bullied for posting myself in a bathing suit? I should be punished because I’m thin and worked hard to be fit after giving birth to two kids? I’m not responsible for making people feel good about themselves,” she says. “I am healthy and proud of who I am and the body I have. If you are going to attack me for being me on my own page, then you will be blocked.”

The influencer also made a point to call out Flack’s comment about how she was able to achieve her body after baby. “Yeah, I have a nanny. I’m a working mother of two kids and proud of it, and that is my business and no else’s,” she states. “It also has nothing to do with my body, and for random women to tell me I should be crediting them for my figure and my ‘excessive workouts’ is actually disgusting.”

The story didn’t stop there. Seeing as her message may have been misconstrued, Seyfried shared another update on her Instagram account to apologize to Charnas and clarify what she meant to convey. “If you know me or are familiar with any of my beliefs or stances, you’ll recognize that it isn’t in my character to tear down anyone for ‘being who they are,’” she says. “Each of us has the ability and the freedom to say and do as we choose. However, as I’m acutely aware, there’s a price tag for the group of people who find themselves with a platform to stand on. You have to be aware of the message you’re sending, and be able to back it up when faced with criticism (not just praise). Hold yourselves accountable instead of using the terms above,” she says.

Seyfried also admits that in the heat of the moment, she may have approached the situation the wrong way. For that, she’s deeply sorry. “The only thing I’d take back is exactly how I started this debate. I desperately wish it hadn’t targeted (or blasted) one person—there are many who engage in this questionable messaging—and instead started a cleaner, general conversation,” she says. “No one needs to tear anyone apart. And I regret that it’s present right now. To the lady in question: I’m sorry for the truly negative feels you’ve endured because of this.”