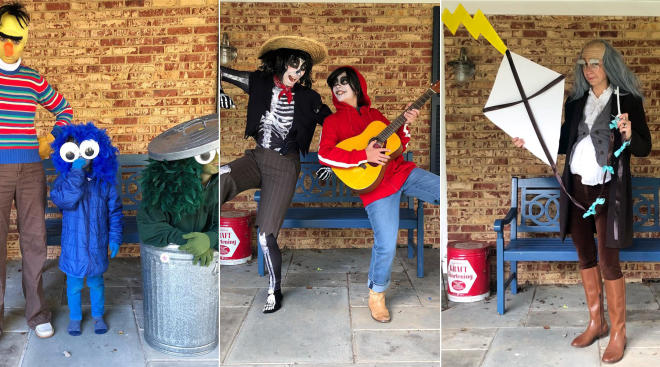 When it comes to the Halloween spirit, Julie Mudrick is in a league of her own.

The Virginia mom of five rose to online fame back in 2016, when the internet fell in love with her October tradition of picking her kids up from the bus stop wearing elaborate costumes. And while it may seem like a ritual inspired by the Halloween season, it’s not quite the case.

Mudrick first began her dress-up ritual in October 2013, when she noticed her then 8-year-old son was too worried about what others thought of him, ABC News reports. As she explains on Instagram, she wanted to teach her kids “to be unique, have fun and to bring joy to others.” And just like that, the month-long costume party began.

Over the course of the years, Mudrick has stepped up her game, occasionally tying in classic Disney characters to complete the look.

She and her son nailed the Geppetto and Pinocchio duo, complete with puppet strings.

Ursula being struck by King Triton was another ensemble for the books.

And Peter Pan and his pesky shadow likely had the bus stop regulars cracking up.

Harry Potter costumes are popular year after year, but have you ever seen a posse pull off the infamous dementor’s kiss?

Mudrick’s Napoleon Dynamite impersonation is spot on, right down to the facial expression.

When Oct. 1 rolled around this year, the mom was pumped to get the tradition rolling once again. Lucky for us, this year’s looks are already off to a hilarious start.

She and her kid masterfully reenacted a scene from Disney’s animated film Coco as the first bus stop costume of 2018.

She even decided to throw some American history into the mix, dressing up as Founding Father Benjamin Franklin.

She and her son really got into their Black Panther characters, creating a fierce photo shoot.

October has only just begun, but we are loving this dedication to Halloween. Have a little one at home and not sure what to dress him as this year? Draw some inspiration from our picks for the best Halloween costumes of the year.