‘I Need More Help’: Mom’s Letter to Husband Debunks the Myth of the Super Mom 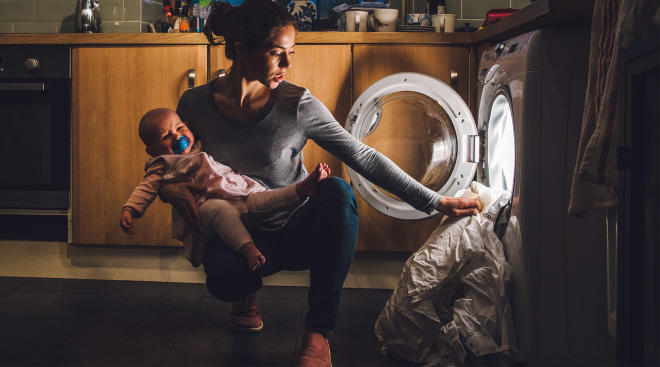 Bringing home a baby changes everything–and we mean literally everything. Having a newborn in the house can put a strain on any relationship, no matter how prepared you feel. Emotions are heightened (the lack of sleep doesn’t help) and partners are forced to tackle new challenges head-on, all with a plus one in tow. A post shared by the Facebook group Breastfeeding Mama Talk shares these challenges from the perspective of a mom. And honestly, it’s a post that every new dad should read.

Mom-of-two Celeste Erlach originally posted this letter to her husband on the parenting website MomBabble back in 2016. It’s recently resurfaced, and is creating a lot of buzz. Erlach begins her post with a simple ask of her husband: to watch the baby and their 3-year-old so she can get to bed early. The baby is crying, though, and Erlach doesn’t know what to do. Her husband makes the decision for her.

“You came into the room 20 minutes later, with the baby still frantically crying,” she says. “You placed the baby in the bassinet and gently pushed the bassinet just a few inches closer to my side of the bed, a clear gesture that you were done watching him.”

Her husband gave up on the baby after only 20 minutes, assuming that Erlach would know what to do far better than he would. She can soothe the baby and forgo sleep without complaint. And this is the problem, Erlach says: “As much as I cringe just thinking it, I’m going to say it: I need more help.”

“I know it’s not how our parents did it, and I hate even asking,” she says. “I wish I could do it all and make it look effortless. And I wish I didn’t need kudos for doing things most people expect from a mom.”

She finds herself just wishing for more breaks but at the same time, acknowledges that she’s set the precedent that she can do it all. She’s afraid to raise the white flag and actually address the issues with her husband. She thinks, maybe everybody has these problems.

Not necessarily. Not all dads are clueless—far from it. There are so many fathers who take pride in sharing responsibilities with their partner and want to be seen as an equal, not a babysitter, best friend or handyman.

Our main takeaway of Erlach’s post? Communication should be a top priority for new parents, if possible, before baby arrives. Setting expectations goes a long way toward keeping your union strong. Some advice for dads? Make a point to do instead of ask. The cultural stigma of women holding it all together weighs heavy on moms, usually without dads ever noticing.