“I am not two tons, but I did just have a baby.”
ByStephanie Grassullo
Associate Editor
PublishedJan 2019 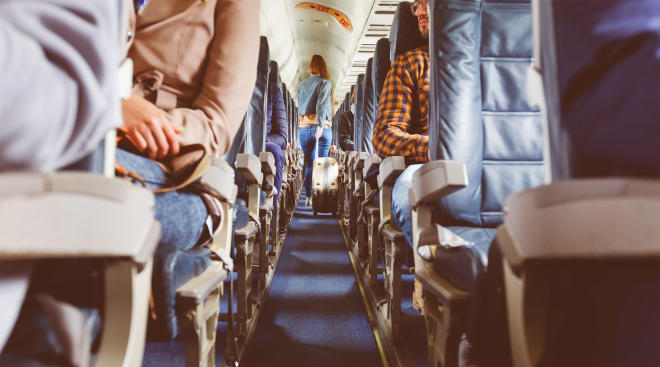 After boarding a Delta Airlines flight, Katie Kiacz had to endure rude comments about her postpartum body from the passenger sitting next to her, Yahoo reports. Hoping to raise awareness and encourage others to think before they speak, the new mom penned an open letter to the passenger on Facebook.

The scene played out after Kiacz got situated in her seat. Seeing a text message between the man sitting next to her and his friend, she read the mean words about her body. Owning up to screen-peeking, she defended her body to the stranger.

“You referred to me as a ‘two-ton woman.’ You told your friend [as] soon as I boarded and you saw me, that it was ‘not good.’ When I confronted you saying ‘I am not two tons, but I did just have a baby,’ you sighed and got up to use the bathroom, then quietly asked the flight attendant for a different seat,” she recounts.

Much to his dismay, there were no available seats for a swap. The two then went without speaking a word to each other for the rest of the flight. Although the mom explains she does not need his validation, she wants the man to know his words were harsh and uncalled for.

“Because I do not exist to please you. Because I will take up as much space as I want. Because even when confronted, you did not think you were in the wrong…”

“I hope a woman in his life sees this and is able to explain to him why his behavior was inappropriate,” she writes.

After Yahoo reached out to the mom for an interview, she decided instead to direct others to the work of a professor who studies female body image.

And to the passenger who sat next to her, she has only one thing left to say:

“I’m glad you had to sit next to me the entire two-hour flight. I’m only sorry I couldn’t take up more space.”