New Parents Don't Sleep Well for Up to Six Years After Baby Is Born, Study Says

And we’ll let you guess which parent’s sleep cycle is more disrupted.
save article 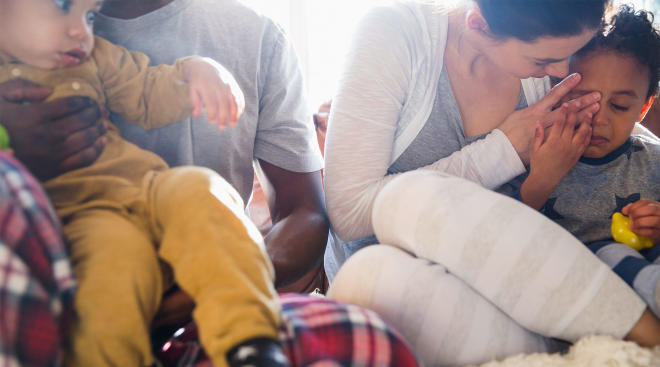 It’s no secret that sleep is a hard thing to come by when you’re a new parent. For many, a solid eight hours of sleep may seem even crazier than winning the lottery. And, not to be the bearer of bad news, your serious lack of snoozing may last for a few years after baby is born, according to one study.

It’s already been proven that a newborn has a major short-term effect on a mom’s sleep cycle, but researchers at the University of Warwick say sleep duration and satisfaction for both parents doesn’t go back to normal for up to six years after baby is born.

The researchers studied sleep in nearly 5,000 parents who had a child between 2008 and 2015. Their sleep was reported on in yearly interviews with the parents. During the first three months of having a newborn, mothers slept on average one hour less, and fathers’ sleep cycle decreased by about 15 minutes.

“Women tend to experience more sleep disruption than men after the birth of a child, reflecting that mothers are still more often in the role of the primary caregiver than fathers,” says study researcher Sakari Lemola, PhD.

The team also noted a couple of factors at play. For starters, sleep disruption was more noticable for first-time parents than those who already had kids. During the first six months, there was also a bigger effect for moms who were breastfeeding compared to those who used formula.

Other factors which surprisingly didn’t come into play were household income and dual or single parenting.

It’s inevitable—when baby comes you likely won’t get as good a night of sleep as you’re used to. With that in mind, there are a few sleep tricks you could do to help you get back on track. And when all else fails, take comfort in knowing you’re not alone. Misery loves company, and these memes perfectly sum up what it’s like to be a sleep-deprived parent.

Why Did My Newborn Change From Sleepy to Cranky?
Article saved.Go to My Saved Articles
Article removed.