Gently nudging baby to clean up during playtime may make for a healthier toddler later on.
ByStephanie Grassullo
Associate Editor
PublishedSep 2018 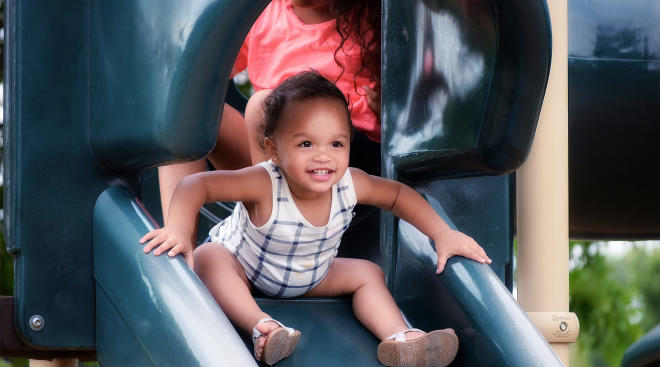 Parents who positively interact with their kids during playtime and the clean up process may have an impact on their child’s weight later in life, a recent study says.

Penn State researchers tested kids lacking the ability to control their behaviors, and found they ended up having lower body mass indexes (BMI) as toddlers if their parents engaged during play and encouraged them to clean up once the fun was over.

The results of the study suggest when parents help their child develop self-regulatory skills, they may also be helping them maintain a healthy weight down the road.

The study focussed on 108 mothers and their 18-month-old toddlers. The kids were weighed and asked to participate in tasks designed to measure their temperament and regulatory skills. The moms and kids then played for five minutes, until a researcher signaled for the moms to begin to clean up. The researchers observed how each mother guided her toddler while cleaning up, and whether or not she used a positive or negative tone.

When the kids turned four and a half, the children were weighed again. The results showed when mothers engaged during playtime and exhibited gentle control while cleaning up, the toddler was more likely to have a lower BMI.

The opposite happened for kids with strong self-regulation skills, who ended up showing higher BMIs when their parents used gentle control tactics during play. So, breath easy—it’s not all on you, moms. Researchers say this reminds us although parents have an influence on their child’s behavior, the kid also affects his own development.

“It’s understandable that parents can’t always be positive and gentle when controlling situations,” says Cynthia Stifter, a human development and psychology professor at Penn State. “But in situations where you can, this study implies that this way of parenting will teach the child a skill that they can apply in many situations, including waiting to eat or eating a less desirable food. This skill—complying when asked to do or not to do something—is one of the most important developmental tasks of early childhood.”

We know, it is hard not to give in to everything your adorable toddler wants. But sometimes, it may be what is in her best interest. Check out our pro tips to help you teach your toddler to clean up.