The Different Stages of Play and How They Help Kids Learn

Kids playing nicely with each other doesn’t just happen overnight. Learn about the various types of play and how they boost your child’s development. 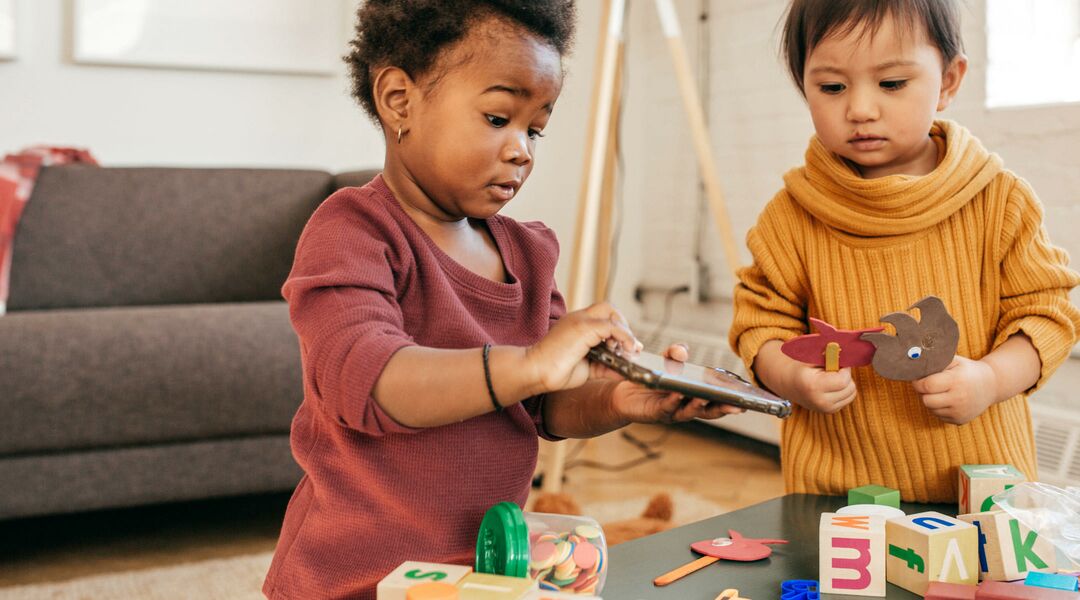 Picture this: You’re at the playground and spot a group of preschoolers running around playing tag, a couple toddlers in the sandbox seemingly ignoring each other and a baby hanging out in her stroller just watching it all. Which children would you say are playing? Would you believe us if we said they all are? The truth is, there are many different types of play that emerge at various ages and stages—but they’re all critical to your child’s learning and well-being.

“Play is such a crucial form of expression for children that it’s often referred to as ‘children’s work,’ which captures how important it is for their social, emotional, cognitive and physical development,” says Bibi Boynton, LCSW, a child therapist and parent coach who specializes in children’s mental health. “Some people hear the word ‘play’ and think of it as something fun but frivolous, particularly if it doesn’t include obvious elements of learning. But the fact of the matter is that children’s play is all about learning and growth, whether that’s immediately apparent to an observing adult or not.”

While it’s definitely an educational endeavor, that doesn’t mean play shouldn’t still be, well, playful. “When you add fun to learning, children thrive,” says Lee Scott, an early childhood education consultant and chair of the Goddard School’s Educational Advisory Board. “As children play, they learn to collaborate, communicate, test out ideas, build vocabulary, create, solve problems and do much more.”

Based on pioneering research done by Mildred Parten in the 1920s, early childhood experts often describe different stages of play, with the earlier periods involving more solo experiences that gradually expand to include more social interactions. But “the stages aren’t neat and clean lines,” cautions Jack Maypole, MD, an associate professor of pediatrics at Boston University School of Medicine. Children, especially toddlers, may vacillate between different stages of play as they become more comfortable engaging with their peers in new ways. Read on to learn more about the distinct types of play, and what you can do to help guide your child’s development.

With the exception of older children who have neurological challenges, unoccupied play is typically seen only in babies and very young toddlers. Also called unoccupied behavior, it’s used to describe children who are watching anything that happens to be of interest in the moment—like a baby observing her sister. Little ones who are engaging in unoccupied play might also be looking at things like shadows moving on a wall, manipulating their own bodies (picture an infant on his back grabbing his feet) or crawling around a room to follow a parent.

As the name indicates, solitary play means playing alone, but in such a way that the child is completely focused on what they’re doing and not concerned with their peers’ activities. It’s important to give kids breathing room during these times, Scott says, and to resist the temptation to correct mistakes, especially if the kids are happily entertaining themselves (and what busy parent doesn’t want that?). “Parents don’t need to hover. Let the children build a tower that falls or color outside the lines—as they learn to practice and try again, they’ll develop critical-thinking skills, initiative and creativity,” she says. Solitary play typically starts during the baby years and continues throughout childhood.

Imagine two preschoolers kicking a soccer ball around a park while a young toddler pushes her doll stroller nearby, watching them carefully. Onlooker play refers to a child observing other kids playing, possibly talking to them or asking questions, but not actively engaging in the game. Onlooker play is a bit similar to unoccupied behavior but keeps the focus on other children’s activities, instead of simply observing anything that seems interesting, such as objects. “This has benefits when children learn from what the others are doing,” Scott says. “You can support them by asking questions about what they’re watching and encouraging them to join in.” Onlooker play usually starts in the toddler years and may still be observed in elementary school children.

Children often start mimicking their parents in babyhood through games like peekaboo, which Scott says can help strengthen the parent-child bond. But around age 2 they’ll also start to imitate their peers—like at a sing-along, when one kid starts jumping to the music and another follows. They might not be directly engaging with the other kids during imitative play, but they’re showing a new awareness of each other. You can encourage this type of play by incorporating rhyming games, songs and dance parties into your little one’s playtime, and creating opportunities for your child to play with slightly older kids.

Parallel play, which usually starts with young toddlers around age 2 to 3, refers to children who play side by side in the same space. They may converse or take turns picking up the same toy, but their interaction is limited. "As children begin to practice give-and-take—first with toys and then, as language blossoms, with thoughts and ideas—parallel play gives way to cooperative play, where kids are fully engaging with each other,” Boynton says. “As in many areas of development, this transition isn’t a straight line—there can be some back-and-forth between parallel play and cooperative play as children grow and learn.”

Like parallel play, associative play is another intermediary phase of play that helps kids prepare for more interactive types of play down the road. The term “associative” means that children are playing the same game or working with the same materials. Parents can help encourage kids to actually play together by “scaffolding,” or gently guiding their interactions. “By scaffolding play, adults provide children with a platform in order to reach richer, more in-depth levels of development in their play,” Boynton explains. “So maybe two children are playing side by side, and an adult suggests, either with words or in a visual way, how they might connect their play with one another.” For younger kids, that might be as simple as demonstrating how one child’s block building could connect with another child’s structure by adding a bridge. For preschool children who are having fun coming up with a backstory for their role play, it could mean calling your kid’s attention to a friend’s suggestion for how the narrative could evolve and helping them incorporate each other’s ideas into the game.

All the previous stages of play help prepare kids for cooperative play. “It’s when they’re truly playing and planning together,” Scott says, and, as with many other types of play, it’s critical for social and emotional development. Taking turns while playing a board game, putting on a puppet show, playing house and assembling a puzzle together are just a few examples of what cooperative play can look like. True cooperative play gives kids the opportunity to “learn the building blocks of social interactions with peers, which leads to successful friendships,” Boynton says. It also provides a safe place to make mistakes and practice resolving the inevitable skirmishes that erupt when a bunch of toddlers are in the same space (“You’re not moving the trains right!” or “I had the doll first!”). “As children develop from toddlers into preschoolers, and with the help of supportive adults, they can learn to express their needs with one another, and play provides a space for the early development of empathy,” Boynton says. Cooperative play doesn’t typically happen until the preschool period, at the earliest, when kids are about 4, since it requires a certain level of maturity.

“This is the classic type of play in the toddler to preschool years, when children might act as their favorite pretend or fantastical characters,” Maypole says. You can help inspire your child’s imagination by encouraging him to dress up, pretend to be a plane or an animal, set up an imaginary store or stage a show for the family. “It’s a wonderful way that children express their complex emotional inner landscape, revealing their inner concerns, fears, joys and confusions,” Boynton says. “It’s also a fabulous backdrop for practicing the elements of cooperative play, infused with the creative power of their burgeoning imaginations.” Crafting a story, figuring out its arc and assigning characters that become increasingly complex and emotionally driven also help children work on early literacy skills. Dramatic play usually incorporates other types of play, such as imitative, competitive and physical.

Children don’t really grasp the concept of winning and losing until age 4 or 5, which is when competitive play can kick in. In supportive environments, a little competition can be healthy, Scott says, since it helps kids understand that losing isn’t the end of the world. To introduce your child to the notion of winning, losing and taking turns, start with a simple board game like Candy Land. If even that seems too upsetting, try a game where players are on the same team working toward a common goal, like Richard Scarry’s Busytown Eye Found It or the Sneaky, Snacky Squirrel Game.

The American Academy of Pediatrics recommends that children 6 and up get at least one hour of physical activity each day. Not only does it help little Tasmanian devils burn off energy, but also studies have shown that physically active kids are less likely to become obese adults. Playing tag, climbing playground gyms and playing hopscotch are all great ways for kids to get active and strengthen their muscles. Rough-and-tumble play (also called horseplay or big body play) is a specific kind of physical play that can involve wrestling or pretend fighting, and may be part of games about superheroes or good and bad guys. This type of roughhousing can make some parents nervous, but while adult supervision is necessary so kids don’t get hurt, horseplay is actually healthy and linked to normal brain development. Rough play can also help children release energy, satisfy their need for close physical contact and encourage them to take appropriate risks.

You’ve probably heard about STEM learning (as in science, technology, engineering and math). Constructive play is the precursor to all that. “This is when children create things with toys or objects in their environment. It helps them develop science, engineering, creativity, math and problem-solving skills, and it encourages our early inventors,” Scott says. Think: skyscrapers that kids build from blocks or cars they design out of cardboard boxes. This type of play also encompasses sensory play, when kids experiment with materials like floam, rice, clay or sand. You don’t need to bother buying lots of fancy materials to encourage constructive play—kids are content to play with whatever is lying around the house, like empty paper towel rolls, clean plastic containers and empty egg cartons.