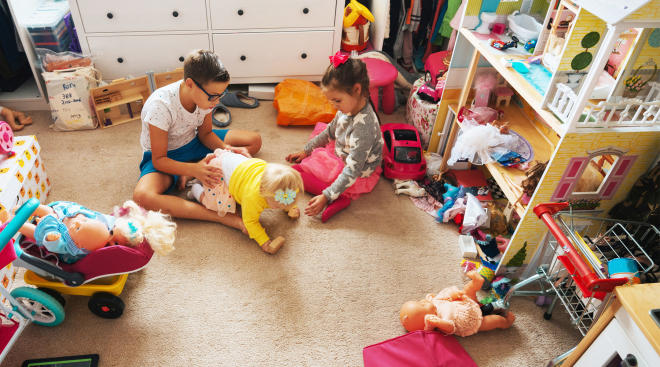 What it means to be both a mom and a dad has changed drastically over the course of the last few decades. Still, some things are slower to change than others. Specifically, women are judged more for a messy house than men are, says a new study published in Sociological Methods and Research and reported on by The New York Times.

The researchers conducted a study on more than 620 people to reveal the beliefs that drive people’s behaviors. Participants were shown a photo of a messy living room and kitchen or a photo of the clean version. The messy rooms had dishes left on the counter, a cluttered coffee table and blankets randomly thrown throughout.

Although both sexes were judged for a messy room, when the study’s authors told participants that women occupied the clean room, it was judged as less clean than when a male occupied it. They also thought the woman was less likely to be viewed positively by visitors and less comfortable as a hostess.

“It may activate negative stereotypes about men if they’re messy, but it’s inconsequential because there’s no expected social consequence to that,” says Sarah Thébaud, associate professor of sociology at University of California, Santa Barbara and co-author of the study. “It’s that ‘boys will be boys’ thing.”

Plus, more often than not, participants said a woman would be responsible for cleaning the room, especially if the occupants were in a heterosexual marriage and both were working full time.

Sound familiar? It all goes back to that much talked about idea of invisible labor. The bottom line? Moms handle the brunt of parenting roles and it affects their happiness. If you’re in a marriage and raising kids with your partner, make sure it’s a team effort. One person shouldn’t be carrying the weight of their family on their shoulders—just half.