Sure, fat babies are cute, but here’s why bigger may not be better.
Save article
ByAnna Davies
Contributing Writer
UpdatedMar 2018 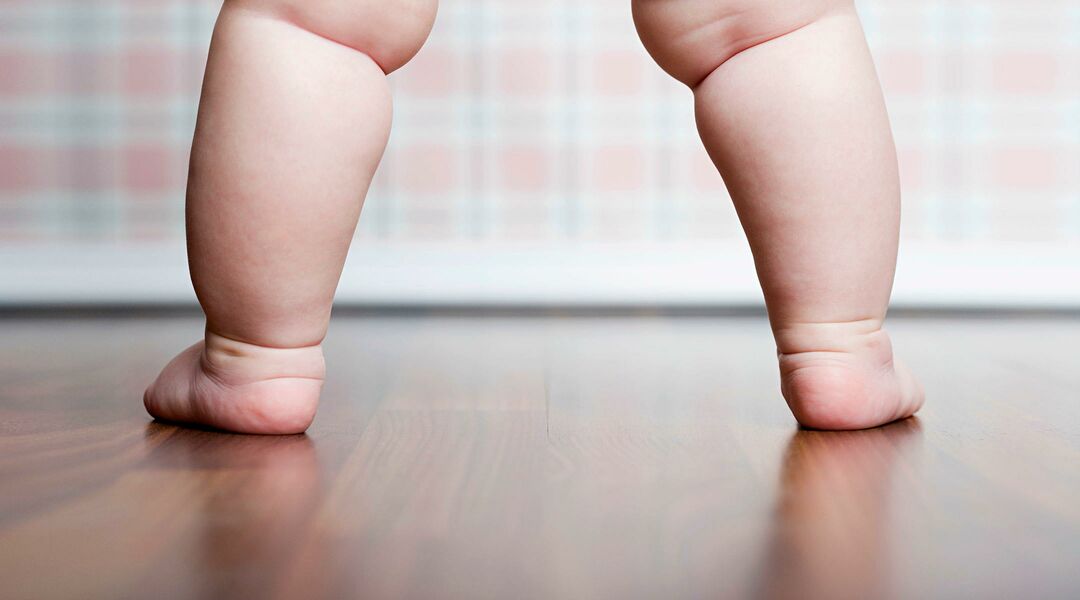 “Look how plump you are!” may not be the most polite compliment—unless, of course, you’re saying it to a baby. From counting thigh rolls to marveling at double—or triple!—chins to poking a deliciously round belly, one thing is clear: Fat babies are irresistibly cute. But all that attention to baby’s body weight can make parents wonder: Is it possible for baby to be too fat? Can an infant eat too much? And is a fat baby going to grow into a fat adult? Here, experts break down what baby fat really is, so you can relax and soak up admirers’ well-meaning comments.

In this article:
Why are babies so fat?
Is a fat baby a healthier one?
Is my baby too fat?
How to encourage healthy eating habits in baby

Why Are Babies So Fat?

It’s not as if baby has been hitting the drive-through in utero, so why are babies so fat when they’re born? Those adorable ankle, wrist and chin rolls are partly protective, experts say—the fat provides an energy source for baby as he adjusts to life outside the womb. And those chubby cheeks? They’re so large partially to help baby feed by supporting swallowing and sucking, explains Eboni Hollier, MD, a Houston-based pediatrician and assistant professor of pediatrics at Baylor College of Medicine.

Is a Fat Baby a Healthier Baby?

There’s a popular saying that fat babies are healthier babies—but that’s not necessarily true. A 5 pound newborn can be just as healthy as one who weighs 9 pounds. “A ‘fat’ baby at birth [who’s above the 90th percentile] is actually a greater indicator of the mother’s health than that of the baby’s,” says Rachel Lowdenback](https://providers.baptisthealth.com/details/9247/rachel-lowdenback-pediatrics-paducah), DO, a pediatrician practicing in Paducah, Kentucky. Maternal factors like gestational diabetes or excessive pregnancy weight gain may have contributed to baby’s large size, whereas moms with uncontrolled hypertension may have smaller babies. At the end of the day, baby’s birth weight is just one aspect of the newborn assessment, says Bande Virgil, MD, a pediatrician and creator of The Mommy Doc website. “A larger baby isn’t necessarily a healthier baby, and a smaller sized baby may not necessarily be unhealthy,” she says.

While it’s normal for any size baby to lose some of his birth weight, she should soon make up the difference. “Babies can lose up to 10 percent of their birth weight in their first week of life,” says Hollier. “However, most babies are back at their birth weight by the time they are 2 weeks old.” This is true regardless of how large baby was when born, so consult your pediatrician if baby continues to lose weight.

Is My Baby Too Fat?

“Wow, what does she eat?” “Look at that little linebacker!” “I could get lost in those chins!” Comments like these may make you question baby’s weight. Remember that newborns come in a range of sizes, depending on Mom’s genetic history and maternal health while baby was in utero—but regardless of baby’s size right out of the womb, he has a lot of growing to do. “Babies will double their birth weight by around 5 months of life and triple it by 12 months,” Hollier says.

According to the World Health Organization baby growth chart, by one month the “average” baby boy weighs 9.9 pounds and the average baby girl weighs 9.4 pounds, but deviations from this standard are perfectly normal. What’s more important, experts say, is that your newborn is following his or her own growth curve. “Instead of focusing on a particular number, parents should observe how much weight their child is gaining in regards to how much they are gaining in height as well,” notes Lowdenback. That means a baby who was born premature or is smaller at birth may have a lot of catch-up growth in the first few months after delivery. “In this case, their weight gain may seem excessive to parents,” says Lowdenback, “but if they’re catching up in height as well, then this gain is normal.”

That said, it is possible to overfeed a baby (although it’s rare). It’s more often seen among formula-fed babies, Virgil says, “especially if families are adding things like rice cereal to the formula, which increases the calories.” A parent’s desire to soothe baby can also sometimes lead to inadvertent overfeeding. It’s important to feed a newborn on demand, “but often parents mistake fussiness or restlessness for hunger,” Lowdenback says. “Instead of trying alternative soothing techniques, we’re quick to feed our child again. This can cause excessive weight gain.”

Baby’s birthweight isn’t predictive of her adult size, Hollier says. But a body of research that’s emerged over the years does point to a link between excessive weight gain in infancy (in relation to baby’s height) and risk of obesity later in life. “If overfeeding is the issue, then there is some evidence that this can prime fat cells early,” Virgil says. According to one study, published in 2016, babies who gained weight rapidly between birth and age one and a half were at three times the risk of being overweight or obese during the early school-age years.

If you’re ever concerned about baby’s weight gain, talk to your pediatrician, who can review your feeding schedule and offer pointers for keeping baby’s growth on track.

How to Encourage Healthy Eating Habits in Baby

While it’s important to discuss your child’s growth chart with your pediatrician, you can also make sure you’re encouraging healthy eating habits for your family early on, especially in the run-up to introducing solid foods to baby. Here, some things to be aware of to ensure your little one stays healthy now—and in the future.

• Practice other soothing methods. A breast or bottle may be a surefire way to get your little one to stop fussing, but having other tricks up your sleeve is smart too, experts say. Swaddling, shushing and swinging are all ways to soothe an infant. Over time, you’ll continue to develop more strategies, whether it’s singing, going outside or just sharing some cuddle time on the couch.

• Sit together as a family. Sure, you may not need to set a place for your breastfed or formula-fed baby just yet, but sitting down together at the table—even if baby’s in a bouncy seat on the floor—is a great habit to start early, says Virgil.

• Limit the snacks. As your child begins to eat solids, set aside time for meals. “Try to limit in-between meal snacking,” says Lowdenback. “Children prefer to be grazers, and if we allow them to constantly snack—especially on processed food items—then we’re limiting what they eat at mealtimes, when they have access to more nutritious options.”

• Keep offering options. Does your child turn up her nose at beets or carrots? Keep offering, says Lowdenback, or try mixing the food with a flavor you know she enjoys. “Children will naturally become more picky throughout childhood, so I advise parents to cast a wide net in the beginning when it comes to flavors,” says Lowdenback.

• Skip the juices. When baby is ready to drink more than just breast milk or formula, skip over juice and go straight to water as a non-milk option. “Encourage your child to be a water-drinker by not offering juices or soda, which are high in sugar,” says Virgil.

• Think beyond the scale. Some parents assume that their stringbean kids have nothing to worry about, but experts say it’s smart to keep a close eye on your child’s plate—offering whole foods and avoiding processed foods where possible—regardless of how petite or hefty baby is. “The American diet tends toward fast, convenient and often non-nutritive foods,” says Lowdenback, “and as parents, we need to be good stewards of their dietary options.”

Finally, says Hollier, remember that the person your child will most closely model is you, based on your genetics and way of life. If you’re unhappy with your own lifestyle or relationship with food, it’s a great time to start healthy habits of your own, knowing you’re setting a wonderful example for baby.

Plus more from The Bump, What To Know For Baby’s Growth Spurts: