The reality TV star has a new family and a new reality show, but admits she’s still getting over postpartum depression. 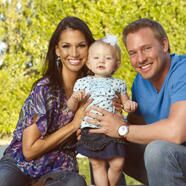 Baby Ava is over a year old now. Has the time flown by?

It has now. The first six months, to be honest, didn’t go so fast. Ava had  colic and acid reflux, and that was tough. But once all of that passed and she started  sleeping more and laughing, it was so great. Then it went fast. Once her  first birthday came, I thought, How did we get here already?

You’ve been openly talking about postpartum depression. How did you know you needed treatment?

I thought I had a really bad case of the baby blues. I was three months into it before I realized it could be postpartum depression. [My husband] Tye [Strickland] — clearly he knew something was wrong. When I brought it up, he said he’d been thinking it, but I was the one to bring it up. I had a massive case of denial, though. I thought women with postpartum depression wanted to hurt their babies. But for me, it had nothing to do with Ava. I had this big emptiness that you shouldn’t have right after you have a baby. I was like, I don’t want to seem like I’m not happy — it’s just that there’s something chemically wrong. I would get frustrated and angry really easily. Usually I’m very in control with my emotions, and that had changed. I found out that I actually had a classic case of postpartum depression. Only 1 percent of the cases are the more extreme kind. Most cases are like what I’d been going through. It’s just that a lot of people don’t talk about it, and I felt like the only person going through it. That was a year ago, and I feel much better than I did then. I’m still not 100 percent yet, but I’m getting there.

What do you want other new moms to know about postpartum depression?

I’ve learned not to be embarrassed or ashamed of what I’m going through. At first, I tried bringing it up as a joke around my friends to see how they’d react. I found out that a lot of my friends had gone through similar situations. Some had given birth just a few months before me. So it was nice to know that I’m not alone in my situation. Your body goes through a lot while you’re pregnant, and you just can’t control everything. I like to be in control! But after Ava was born, I didn’t have control of anything. When you have postpartum depression, you can’t just tell yourself to cheer up — it’s an uncontrollable chemical imbalance. I urge everyone to talk about it, so it can be much easier for other women who go through it.

We heard you had trouble breastfeeding. How was that?

I always knew breastfeeding might not be an option. I had breast-reduction surgery when I was 19, and there’s no way to know if the surgery will affect your ability to breastfeed until you then get pregnant and have a baby. And I wasn’t able to. My milk did come in, but it never came out. Knowing that was a possibility — that it was about 50-50 odds — I was prepared for it, so it was okay. Ava was a formula baby, and she’s doing just fine.

What’s your best advice for other new moms?

I guess what I had to learn is you have to relax and not be so worried about sleeping and eating schedules. There were times when I was driving myself crazy with all of that. You don’t need to be in control of everything all the time. Babies can be unpredictable, and now as a mom of a toddler, it’s even more unpredictable. I learned that you have to roll with the punches. Most of us don’t have a clue what we’re doing with our first child, and we stress out about all the little things. But it really does end up being the best thing you’ve ever done.

So what’s the deal with the new show Melissa & Tye?

It’s a show that a family can watch together. I really like that my family can watch it — even my nieces and nephews — and enjoy it. Technically, we’re still newlyweds, and we’re trying to tackle two different careers and trying to tackle parenthood, and we show people that this is what we go through and how we get through it. We really find humor in a lot of the situations, so there are a lot of laughs.

It sounds like a lot of moms who watch can relate to you.

I do think so. Tye and I live in LA, but we’re very non-LA. We have no nannies and not really even a babysitter — I have one I sometimes call. We don’t have family out here and no friends out here. And we’re trying to tackle it all and find a balance. I don’t know what the right balance is between career and family. I kind of feel selfish either way. If you go for the career, you find yourself wishing you were with the baby. A lot of new moms go through that and want to stay home with the baby, but that’s really hard. I give a lot of credit to stay-at-home moms because it’s a really tough job. I took a year and all I did was focus on Ava. I felt sort of like I gave up my dreams and that something was missing. I want people to see that just because you have a baby, it doesn’t mean your dreams can’t come true. I’ve spent so much time with Ava, and I love that I did that, but I also want her to know that mom had a dream and she went after it. The important thing is that you find the right balance for you and for your family.

What Every New Mom Needs to Know About Postpartum Depression