Sure, you’re dealing with a lot of no! and mine! (I am too.) But at this age toddlers are also imaginative, playful and straight-up fun. Aren’t you happy you’ve got all this now? 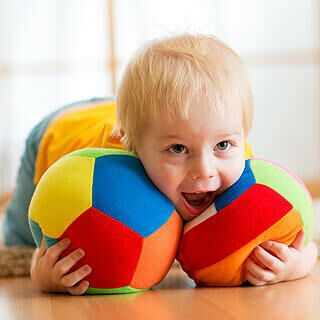 Remember when your baby mostly grunted and cooed? Cute, but not very practical. Now she can tell you that she likes apples and that she wants a hug. (Aw!) She may even be able to tell you what she did during the day, and that little storytelling voice is just so darn adorable.

Whenever I lose something, I ask my two-year-old where it is. A lot of times, she really knows. “Have you seen Mama’s sunglasses?” usually leads to a finger point in the right direction. She notices and remembers things that I don’t, which is pretty cool! This is especially useful when she’s hidden something herself, like the old “remote control in the crib” trick.

They beg to help you

Toddlers want to be involved in everything you’re doing, which is totally frustrating when you’re trying to type an email or cook dinner. But really, they want to help. So if your little chef hangs onto your legs in the kitchen, let him whisk a bowl with water or bring you pots and pans that you need from the cabinet. He’ll feel great having “helped cook!” (This is also useful when you want a Diet Coke but aren’t in the mood to stand up. They’ll totally grab one from the fridge and carry it over.)

They need their own plane seat (yes, this is a good thing)

After age two, kids get their own ticket, and their own seat on a flight. And at first, it’s annoying to have to shell out the money for that. But around the 18-month-mark, you realize that the hidden cost is your own comfort and sanity. They’re too big to be on your lap squirming for hours! Now everyone has their own space. Ahhh….

Toddlers are developing a sense of humor, and they _love _to make you laugh. My daughter started to notice different statues of Buddha, and when she spotted a garden gnome in a neighbor’s yard, she promptly identified him as a deity. When I explained that he was called a gnome, she dubbed him “Gnuddha,” and all the adults cracked up. She knows it’s a funny joke, and she tells it often now. Total Gnuddist, that one.

When you bought that dollhouse/farm set/play kitchen, your baby probably stared at it and drooled. When would it pay off? Right about now! At age two, kids start to really get into imaginative play, so the little people in the house may be making dinner or taking naps, while the farm animals are jumping the fence. Watching toddlers create worlds inside their minds is magical, isn’t it?

They appreciate the little things

Toddlers don’t need an amusement park or a pony ride to get a thrill (though they’ll enjoy those too) — they can find adventure everywhere. Walk outside with your kid and point out moss, pinecones, little ants… (or skyscrapers, sidewalk cracks and the bricks on buildings, depending on where you live). Kids this age are enchanted with the tiny details of life, especially when you’re with them to tell them about what they’re seeing. You’ll feel like kid again getting to explore it all with them.

The newest phrase my two-year-old has adopted is, “I need space.” She means that she wants to play alone, usually in her room, and she’ll bring a couple of books or a stuffed animal in there with her. I love that magic phrase, because it means that I can actually get a few things accomplished in the 10 to 20 minutes of down time she takes. Dishes: Done! Or maybe I’ll just read a magazine for a few minutes. Happy sigh.

They think you’re a genius

I love the look of total trust and satisfaction that my toddler gives me when I answer questions like, “What’s that?” (a cloud, a blade of grass, a new cup or whatever). That’s right. I know the answer. I’m smart! (When she’s three and starts asking “Why is the sky blue?” then I’m going to have to rely more on Google.)

Everything that you’ve done from newborn-hood until now has helped your baby feel loved, cared-for and secure. But now kids really remember their experiences — and they resonate with them. Weeks after you visit Grandma, she may still talk about the plane ride, or the blanket in the bedroom or the song Grandma sang at bedtime. Memories are forming, and it’s so sweet and rewarding to know that.