Mom Shares Her Painful Experience With Her C-Section Scar

Numbness around the scar caused this mom-of-four to injure the area even further later on.
ByAshley Edwards Walker
Contributing Writer
PublishedJul 2018 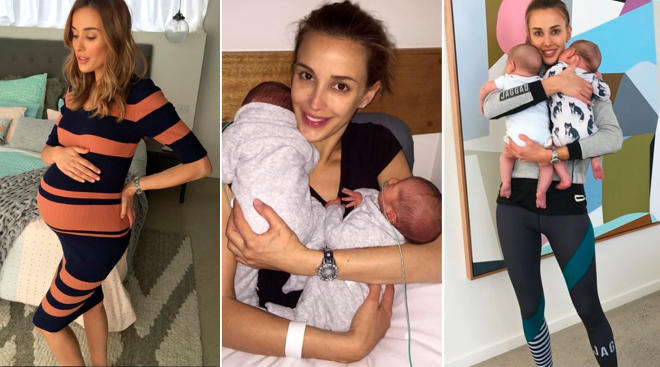 Nearly 33 percent of births happen by cesarean. Some women elect the procedure, while others deliver via C-section to ensure the safety for both mother and child. For women who feel regret or guilt over having one, the resulting scar can be a painful reminder of a sometimes traumatic experience—especially if the scar causes more discomfort down the road.

Rebecca Judd, an Australian TV personality, radio host, and mom of four recently opened up about her own C-section and resulting scar. Judd co-hosts a radio show called 3PM Pick Up with her friend Monty Diamond. When Diamond shared a friend welcomed a child via C-section, Judd got real about her own experience with the procedure, which she described as “awful,” according to the website Mama Mia.

For context, Judd first explained that her two oldest children were born vaginally. But when the time came to deliver her twins in September 2016, the former model had to have a C-section.

For starters, she found the procedure to be extremely unsettling.

“It’s mind-boggling and freaky,” she recalled to her friend and their listeners. “I was lying there, on the operating table, and I started pretty much having a panic attack. My heart was going nuts. It was jumping out of my chest… there’s people everywhere, there’s bright lights, I’m about to meet my twins, it was kind of an emergency cesarean, I’d been stressed my whole pregnancy. It was wild.”

After the procedure, she found herself in a lot of pain—more so than she’d experienced during her previous deliveries.

“After I had my first child, Oscar, I had an epidural and as soon as it wore off, yeah, it hurt a little bit,” she recalled. “I used a lot of ice. But by the next day or two it was fine. Those caesars? Woo, two weeks…”

As with all C-sections, Judd was also left with a scar. And while science says moms should embrace them, Judd has been honest about her unhappiness with her scar—and not just because of how it looks. According to Café Mom, Judd described on air the time she zipped her C-section scar up in a dress she was wearing.

"What’s happened,” Judd explained, “is I’ve worn this dress and it’s got the zip up from the bottom all the way from the hem up to the neck.”

After she put the dress on, she bent over to put on her shoes and that’s when she felt a tugging sensation and noticed a small patch of blood. She realized she had “zipped up the skin around my C-section scar into the zip and not even realized!” Judd revealed. “It was just a tiny bit of it, but I had not even realized because I am completely numb there!”

In the past, the host has joked her scar formed a “sausage shelf,” which sounds like she could be describing keloids, a type of raised scar that grows larger than the initial wound. Keloid scars can sometimes become itchy and painful and, unlike regular scarring, do not regress in size over time. It could also explain why Judd doesn’t have as much feeling in the area, something she says still makes her nervous.

“I’m always leaning over the bathroom counter when I’m doing my makeup with my [curling iron] there, and it’s about at that pelvis height,” she explained on her show. “I could be leaning on a hot tong and just never know. I could just singe off everything and have no idea!”

According to the American Academy of Dermatology, there are a handful of treatment options for keloids. But the best way to avoid them is to allow yourself ample recovery time following a C-section.

For those moms who are feeling unhappy about their own C-section scars, remember that you’re not alone. Check out these photos for proof of just how beautiful those scars can be.