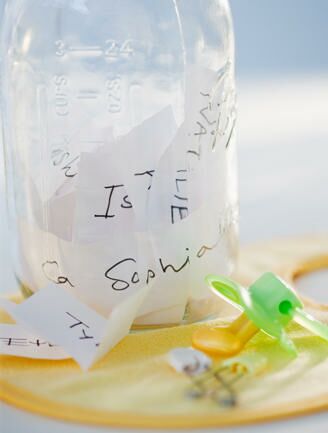 Now, I'm not one to be a spoil-sport. When I attend a shower, I'm right there sniffing melted candy-bar poo out of diapers, taking licks of baby food out of anonymous jars and confidently guessing the nursery rhymes that go with the clues during Mother Goose Jeopardy. But if I'm being honest, traditional shower games leave me with a bit of eye-roll syndrome. Just a tad. Maybe it's because I can never tell pureed beef stew from the turkey and rice, or the Snickers poo from the Milky Way, but there you have it. So, for my own shower, and with the permission of my hostess, I elected to forgo shower games altogether. A baby shower can still be entertaining, festive, and a lot of fun <em>without</em> sculpting tiny babies out of play-dough. Here are some ideas to add a creative spin to your shower: What games did you play at your shower?
1

Wish Upon a Star

Have a picture of your baby’s first ultrasound photo in large white matting. Ask each guest write a wish for the new little one and sign in the white space. Then mom-to-be will have a beautiful, classic and timeless photo to hang in the nursery, and baby will know who was there wishing her the best!

Why not ask guests to bring their favorite book with an inscription written to your new little one? I love opening a book and reading to my little guy and letting him know who the book was from and why they’re special before we dig into the plot!

Haven’t settled on a name? Or maybe you have the first name, but you’re struggling with the middle name? Have a “Name That Baby” slip of paper tucked under each place setting or favor with slots for guests to write in their recommendations. Everyone loves to weigh in on baby names and no one has to get their hands gooey doing this activity. The new momma can read them aloud before opening gifts. Who knows? She may even get a few good ideas!

One of my most treasured shower take-aways is a photo-book of little notecards where each guest wrote advice for me. I loved reading these and I still get them out to read them sometimes. This activity is great for everyone! Who doesn’t love to give their two cents? Even my 6-year-old niece had sage advice. As a bonus, I’ll look back at her little pencil scrawl when she’s 18 and be able to share that memory with her.

Have a Shower… then Have a Party!

I’ve heard future mommas struggle with this. They don’t want a traditional shower with games — they want a par-tay, complete with women and men, cocktails (for those without a bump and mocktails for mama!), and brats. But, they don’t want to offend Grandma Peach and Aunt Plum who love nothing more than sitting everyone in a circle for a round of Baby Bingo. My suggestion: have your cake and eat your brat, too. This baby is cause for celebration! Give Grandma and Auntie what they want for a Sunday afternoon with close family, then schedule a Friday night soiree fit to honor the new little prince or princess with friends and co-workers. Besides, it may be the only time when it still feels right to knock back a glass of sparkling grape juice with all-you-can-eat wings.