The Best and Worst Celeb Baby Names of 2010

Old-fashioned names made a comeback. The Bible got some play. And books were a huge source of inspiration. But sometimes trendy can be downright terrible…. Here’s our roundup of the celeb baby names we loved and loved to hate this year. 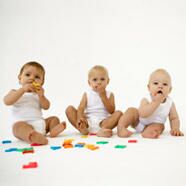 We’re always prepared to be at least a little shocked when we hear a new celeb baby name announced. (Remember Jason Lee’s son, Pilot Inspektor?) But it turns out, this year celebs actually toned down the crazy. Following the biggest naming trends of the year, some of the names they chose we actually love. But don’t worry, there are still a few out-there monikers on the list to give you a good chuckle.

We’re totally digging the classic revival trend we’ve seen this year, and it looks like Matt Damon and wife Luciana are into it too. A flashback to Marlon Brando shouting, “ Stella!” is about as good as it gets. Of course, they may have named her after the beer, but we’re going to go with Brando in our minds.

Okay, so we might be biased because we love anything and everything Padma-related (even her jewelry line — guilty as charged), but we’re big fans of the name Krishna. (Krishna is a Hindi deity, so the name references Padma’s own Indian culture.) And while we don’t expect to see many other Krishna Theas running around soon, we love that the uniqueness of the name isn’t arbitrary and actually has significance.

Parents: Amy Poehler and Will Arnett

Two years ago, the comedy duo chose to name their baby boy Archie and everyone universally cringed (we love the comic but wouldn’t want it as our namesake). But Amy and Will have redeemed themselves this year with a name that’s still unique—without being borderline cartoonish. Plus, they’re totally on-trend—biblical names have been huge for 2010.

While names with literary influences have been big this year (think: Jacob, Edward and Bella), call us crazy, but we think Mark Twain’s _Tom Sawyer _is a much better source of inspiration than Twilight. Can’t you just picture baby Sawyer Steven Hunt whitewashing a fence in a pair of 501s?

Neil Patrick Harris and David Burtka effortlessly combined two baby-name trends with their newborn twins. Gideon, an Old Testament name, is way more interesting than the typical Adams and Benjamins running around out there. And Harper gives a nod to Grace Kelly — what’s not to like? But the truth is, any Doogie Howser decision gets our stamp of approval.

Really, Winnie Cooper?! We totally get the literary trend, but naming your son after the evil albino wizard who tries to kill Dumbledore is totally bizarre (and the schoolyard name-calling is gonna be rough). With all due respect to the Bumpie _ Harry Potter _fans out there, we’d consider Ron, Cedric or even Dudley before jumping the gun with a Malfoy.

That does it — the Oliver fam has officially gone crazy. Between Poppy Honey, Daisy Boo and Petal Blossom Rainbow (shudder), the Olivers already resembled a gathering of pretty pretty princesses more than actual people. And now Buddy Bear Maurice Oliver, who sounds like a cross between a stuffed animal and a Frenchman, has the privilege of joining his siblings at the dinner table.

When we first heard about baby Sundance, we immediately thought of two things: The film festival in Utah, and Vincent Chase’s failed premiere of Medellin at said film festival. Don’t get us wrong — we love happy baby names, but Sundance is simply a hard sell.

We know old-lady names are in and all, but we doubt Beatrix is going to fare well in gym class. Plus, the Beatrix Potter/ George Carlin tribute is one big mishmash that just isn’t working for us.

Oh, boy. That’s quite a mouthful for such a li’l guy, isn’t it? Guess parents Boris and Lilly figured “go big or go home” was the way to go. Sure, it’s on trend with the historical references. But there are just too _many _of those references. Mozart _and _Benedict Arnold? Pick one, guys. It also conjures up images of plates of eggs Benedict, which is weird but also really delicious.

Browse through 1000s of baby names in our Baby Name Finder >>

Thanks to Jennifer Moss, baby name expert and founder of babynames.com.