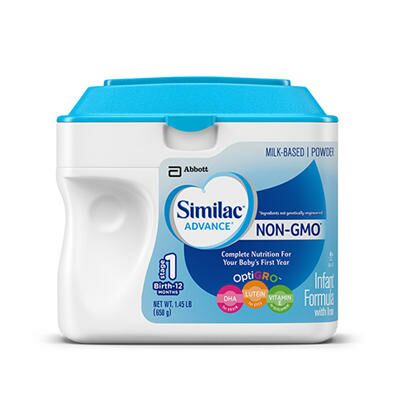 For the first time, a major formula brand will be available without genetically modified organisms.

Similac Advance, the top commercial baby formula in the country, will be available without GMOs at Target this month. Parent company Abbott says it will begin with a non-GMO version of the Advance formula, and roll out a similar version of Similac Sensitive next. Depending on sales, more GMO-free formulas may follow.

Currently, mainstream formula is made up of corn and soy ingredients, 90 percent of which are grown from genetically-altered seeds.

“We listen to moms and dads, and they’ve told us they want a non-G.M.O. option,” Chris Calamari, general manager of Abbott’s pediatric nutrition business, tells The New York Times. “We want to make sure we meet the desires of parents.”

This isn’t the first time Similac has been so in tune with parents. As a part of their “Sisterhood of Motherhood” campaign, the brand created a viral video calling for the end of the judgmental “mommy wars.”

The takeaway? Everyone parents differently. Breastfeeding has benefits, but it’s not for everyone. And, as we’re learning, the same applies to GMOs.

Learn more about choosing the right formula for baby here.