“She's apparently not in any hurry to ping back into shape. She's enjoying this time.”
Save article
ByStephanie Grassullo
Associate Editor
PublishedJun 2019 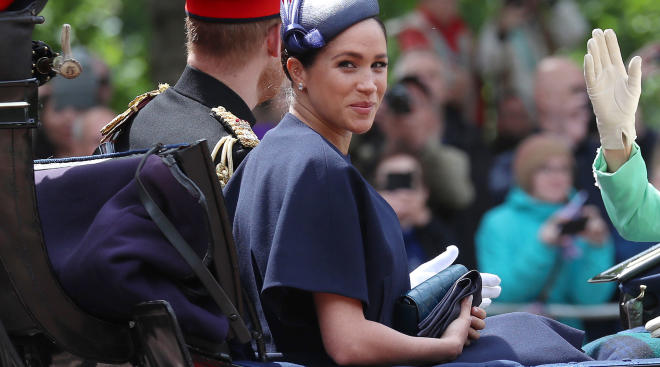 Meghan Markle has been taking it easy on herself since giving birth to baby Archie in May, and rightfully so. Royal expert Katie Nicholl tells ET the new mom has a very relaxed approach to fitness, and “yoga is very much on her post-birth fitness regime.” The Duchess has reportedly been doing yoga with her mother, Doria Ragland, who’s a yoga teacher.

“The whole approach has been holistic, it has been gentle," Nicholl says. "It’s been a natural embracing of motherhood, and with that has come a pretty gentle routine…Meghan hasn’t been hitting the gym. She hasn’t been in any hurry to get back in shape. It’s only four weeks really since the birth and she’s been taking that exercise regime very gently.”

It’s quite different from her former workout routine. “Before she fell pregnant, you know, Meghan was very fit,” Nicholl explains. "She was very into her fitness regime. She used to run around the park in Kensington, but she has been taking it easy.”

Her new mom approach to fitness is likely inspired by her own mother’s journey, who reportedly did yoga with Markle when she was a baby. “Apparently, Doria took up postpartum yoga and baby yoga, and that’s all Meghan has been doing," Nicholl says. “And lots of proud walks around Windsor Great Park, so, gentle exercise, but no hard training, no weights. She’s apparently not in any hurry to ping back into shape. She’s enjoying this time. She’s being gentle to herself.”

Postpartum recovery is so important for new moms. Like Markle, all women should take the time to get used to this new normal instead of worrying about “bouncing back” after baby.