Without a care in the world for what was likely the first time in weeks, the mom all but ran to the Happiest Place on Earth.
save article 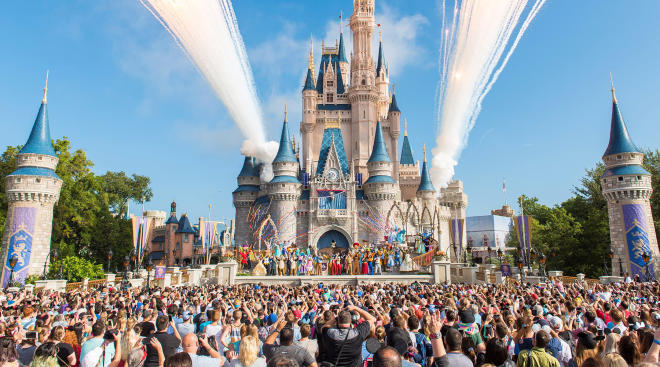 School is finally back in sesion, what are you going to do next?

Lisa DiNoto didn’t win the Super Bowl, but she did the next best thing—made it all the way through summer vacation with her kids, a touchdown in itself.

Finding ways to keep kids entertained during the summer is no simple feat. By the time August approaches, parents are already packing their kids’ backpacks and counting down the days until the yellow school bus comes rolling down the street. When the much-anticipated moment finally arrived, DiNoto felt like she was in heaven on earth, or rather the Happiest Place on Earth. Granting herself a much-needed solo day trip to Disney, the Florida resident frolicked her way through Magic Kingdom without a care in the world.

“This, my friends. This is what you do after you drop your kids off on the first day of school,” DiNoto writes on Instagram. “You get yourself a pin and you walk it around Magic Kingdom like some garden gnome on a world adventure.”

The mom of two boys is no stranger to the amusement park. The Disney-obsessed mom and her family left Maryland in 2017 to make a new home in Florida. Just north of Magic Kingdom, she gets a front row seat to the park’s fireworks from her bedroom window. Since making the move, she’s been sharing the magical mayhem on her blog, The Castle Run. So once school was back in session, the mom couldn’t get to Disney fast enough.

Ask any new parent who’s been to Disney recently and they’ll tell you: Navigating the magical world was a whole lot different pre-kids. Back then, your only concern was where the closest Mickey ice cream bar was being sold. But when kids are part of your cargo, it’s a whole other beast. Between strollers, snacks and sunscreen, the Happiest Place on Earth may not seem so happy anymore.

All jokes aside, the memories you make when you visit Disney World with your children are unforgettable, but there’s no shame in leaving them at home, or in this case at school, to make the most of a little mom-time magic. “People are going to start stopping you and telling you that you are life goals,” DiNoto explains in her recap post about her visit. “They will often be saddled with strollers and lots of tired children. Be gracious, comfort them. Wish them a magical day…And try not to skip away.”

Feeling as free as a bird, the mom got herself one of the park’s iconic pins and was sure to let the world know she was celebrating her kids’ first day of school. Not stopping there, she captured the memories on camera, photographing herself and cast members posing with the pin. While some characters stayed on brand, like Snow White who the mom says chose not to join her in “mocking” her kids, others, like the Fairy Godmother, laughed along with DiNoto during her daycation.

“We live so close it’s just a regular part of our lives,” she tells Good Morning America. “It’s not unusual to pop into Epcot for lunch or go for a run at a resort or take the kids to ride a favorite attraction or see a favorite show after running errands on a weekend.”

And when the school dismissal bell rang, it was back to business. “They were excited for their first day at school and I was excited for some time alone. Pickup time came soon enough, and all of us had lots of fun sharing the details of our day,” she explains to GMA.

That right there is #MomGoals.

Chrissy Teigen Says No One Takes Photos of Her and Moms Can Relate
Article saved.Go to My Saved Articles
Article removed.
Name added. View Your List