All I Want for Christmas Is No Front Teeth 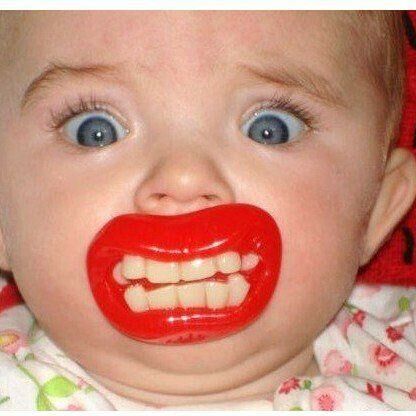 For nine months and three weeks, we essentially coasted through breastfeeding. Sure, there were cracks in the beginning; Daddy bought stock in Lansinoh Lanolin. Round-the-clock nursing left you burning up; we pushed aside some oranges in the produce drawer to clear space for cooling gel pads. But for the most part, you escaped unscathed.

Until December 1, when our little girl’s very first tooth emerged, popping its head out of her lower gums like a tentative woodchuck on Groundhog Day. And now, you are afraid. Very afraid. Like a 53-year-old freshly divorced periodontist with a shiny new Ferrari and a brewing midlife crisis, Evie’s more than a little excited to show off her new toy. As a result, I now need to nurse with my thumb hovering an inch above her chin, poised and trigger-finger ready to pull her chin down if she forgets you’re not a skin-flavored frozen bagel.

Thankfully, there have only been a handful of half-hearted nipple nibbles so far. I read that technically, it’s impossible for babies to nurse and bite at the same time so the key is to be prepared; ensure a solid latch and pull her off the moment she stops sucking. A friend told me to smush her head into my boob the second she bites and yell, gently but firmly, “No!” (she said it would make her start to associate biting with suffocating and she’s soon quit) but I tried that once with an ex-boyfriend and all it did was turn him on.

Look, plenty of moms breastfeed well past their little ones cutting their first teeth. You think TIME Magazine Mom took a two-year hiatus while her son’s gums filled out? She didn’t quit and neither are we. My gut tells me Evie won’t even be a biter so until she proves us wrong, let’s keep up the good work – our one-year goal is within sight! And don’t worry: I’m taking back the “Team Edward” onesie given to her by Twilight-fan aunt with the dark sense of humor. Not funny.

Did your baby’s teeth affect your breastfeeding relationship?