Get ready to roll! This roundup of some of the best jogging stroller options out there features something for every baby and budget. 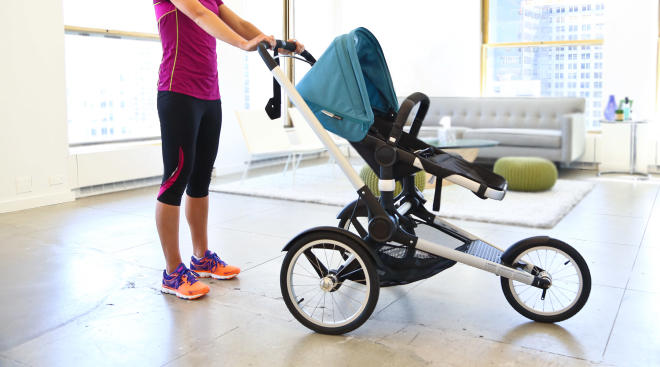 Looking to get into shape post-pregnancy? You’ve got lots of options. There’s the gym membership, aka annual corporate health club donation (at least for those of us who don’t actually show up), or the stationary bike, which also works as an overpriced laundry rack. And then there’s the jogging stroller, which perhaps has the highest potential to be used for its original purpose. You’re going to want to take baby on regular strolls anyway, right? And what better way to bond with your little one than introducing her to the exhilaration of exercising in the great outdoors!

Before you chart out a routine, though, know that in order to run with a jogging stroller, baby needs to be at least 6 months old and able to sit up; his neck isn’t ready for a run in the jogging stroller until that happens. However, you can still walk with baby in it before then, especially since many versions allow an infant car seat to be strapped in. At the half-year mark, remove the car seat, and you’re both ready to kick up the speed.

What to Look for in a Jogging Stroller

• Wrist strap. This tethers to the stroller, so baby won’t separate from you as you fly like the wind!

• Wheels built for gliding over terrain. Three large air-filled tires operate much like those on a bicycle.

• A front wheel that locks. Unlike a regular stroller, which needs to swivel for sharp turns, say, in the grocery store, a jogging stroller requires its front wheel to lock in a forward position when on a jog, so it doesn’t vibrate or accidentally slip to the right or left.

• A deep seat for baby to sit in. If he’s going to be sailing along, he needs to be sitting back like a pilot in the cockpit!

• An adjustable handlebar. Or one that happens to be the perfect height for you. You shouldn’t have to bend or stretch awkwardly as you go; pushing should be effortless so you can focus on your run.

Jogging strollers span from just under $100 to over $600, and can sport a wide range of features and accessories. Here’s a roundup of our favorites: 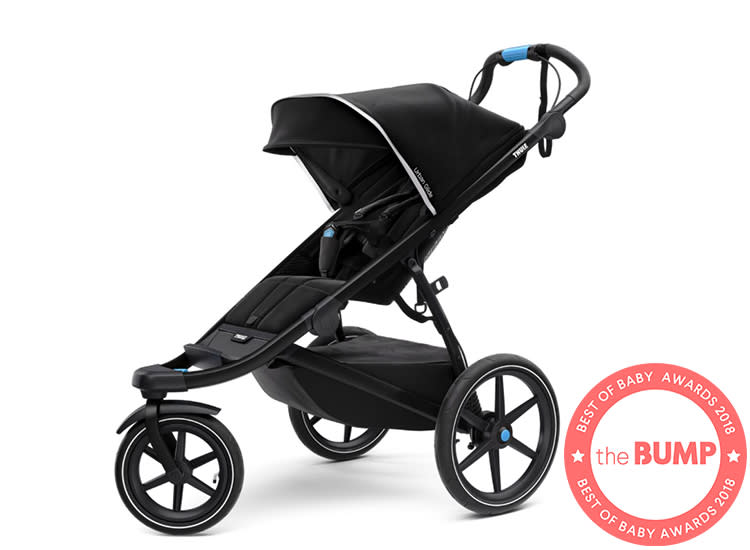 The Thule Urban Glide 2 is the perfect stroller to accompany you on marathon runs, sidewalk stroll, and anything in between. With car seat compatibility and a 75-pound weight capacity, this is a stroller that can be used from infancy through childhood. If you’re logging some serious miles, you’ll appreciate how the front wheel swivels for easy turns and locks in place for exercise, while the rear suspension handles everything from city curbs to mountain trails. And when you’re done? It folds up to fit in your trunk. 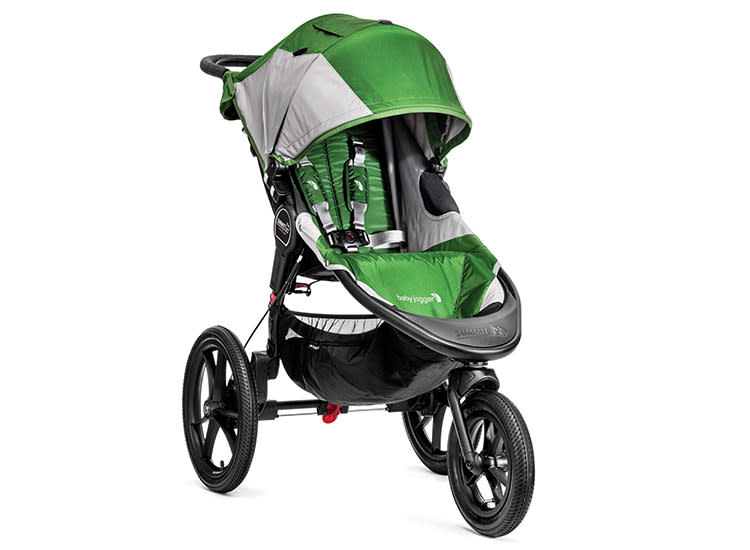 The Baby Jogger stroller is a winner because it’s going to last for years. In addition to sturdy, fuss-free wheels and thick, weatherproof fabric, it can hold a child up to 75 pounds instead of the usual 50, so you can use this jogging stroller to run with a school-age kid if you’re up for it! This one also lets you lock the front wheel in place via the handlebar and has an easy, one-hand fold. An adaptor (sold separately) allows it to hold any infant car seat. 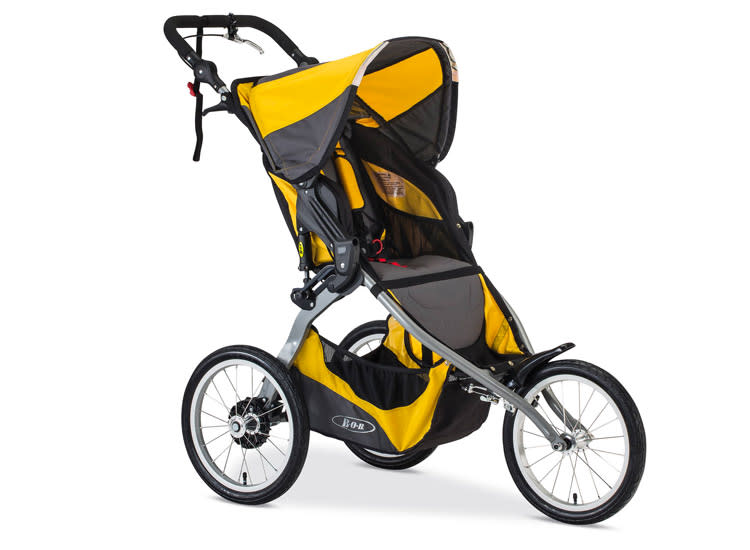 BOB jogging strollers partnered up with the Ironman Triathlon to design a stroller for racers serious about training with a child in tow. All three of its wheels are a substantial 16 inches; the front wheel stays in a fixed position for optimal racing performance; and the focus is less about storage and more about sleek, aerodynamic design. This jogger also holds a child up to 75 pounds. Finally, the handlebar adjusts to nine different positions, so it’s as comfortable for a mom who’s 5 feet tall as it is for a dad over 6 feet. 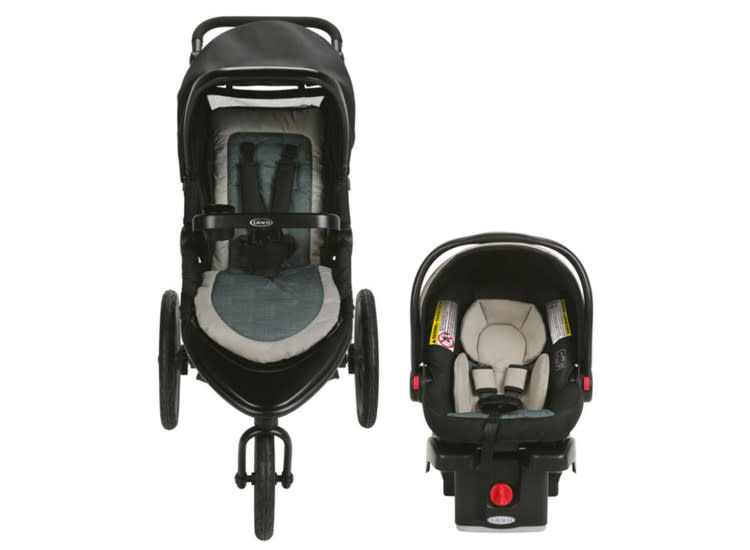 Graco’s jogging stroller is sold along with its award-winning SnugRide infant car seat in a sweet two-for-one deal known as a travel system. The car seat just clicks into place, and the stroller can be folded with one hand in a split second! Many parents use this as both their jogger and their everyday errand-running workhorse. 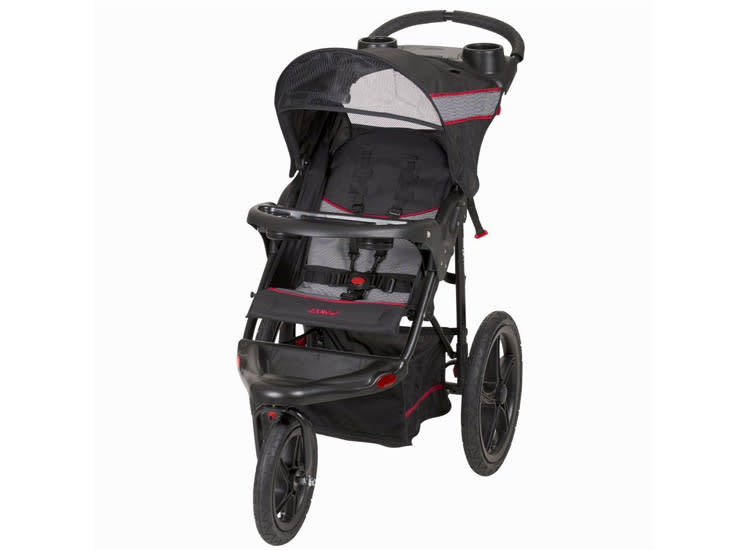 If you’re looking for a wallet-friendly model, the Baby Trend’s jogging stroller is a winner, coming in at an unbelievable $70 without compromising on durability. “I jog three miles about four times per week and this stroller is great,” says one reviewer. So what gives? The canopy isn’t as large, the seat isn’t super thickly padded and the snack tray means it doesn’t fold very small. It also only accepts a Baby Trend car seat. But if you’re okay with all that, then you can jog with baby without spending a fortune. 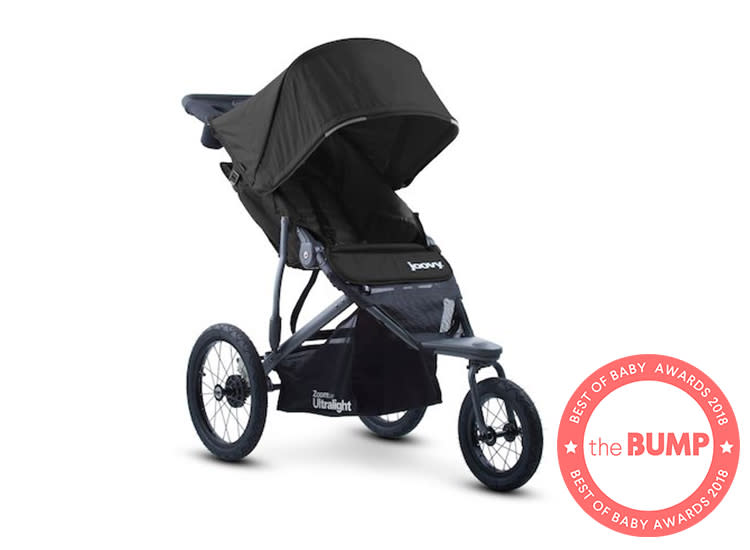 No stroller built for running is truly lightweight. If it were, it would bounce over the ground instead of hugging the road. Still, some joggers are heavier than others. And if you are worried about being able to lift your stroller in and out of the trunk easily, or get it up and down steps, try the Joovy Zoom. At just under 26 pounds, it’s 4 or 5 pounds lighter than its biggest competitors, and it folds down to an easy-to-store size. Says one reviewer, “It doesn’t take up much of my trunk at all and has become our everyday stroller.” 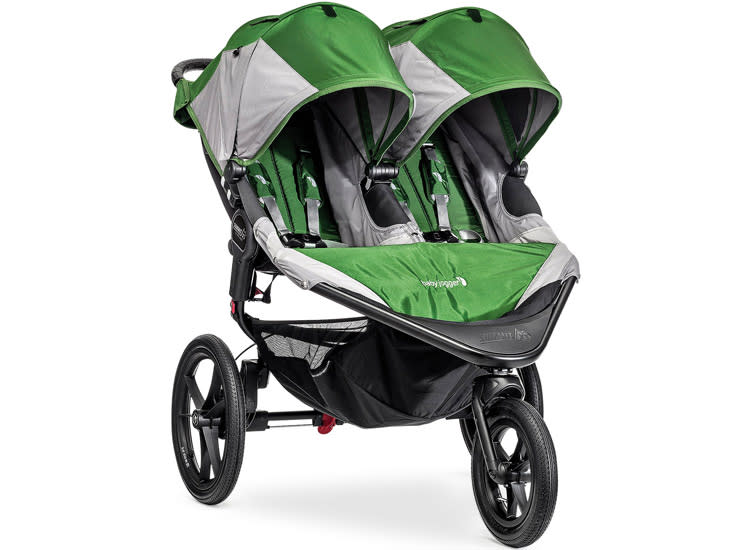 The Summit X3 Double is, as you’d expect, large and heavy (it weighs 36 pounds), but it lets you run while moving two 50-pound kids. Says one reviewer: “I use this stroller more than I use my mini van! It pushes like butter.” Many reviewers appreciate that both seats recline nearly flat for naps. 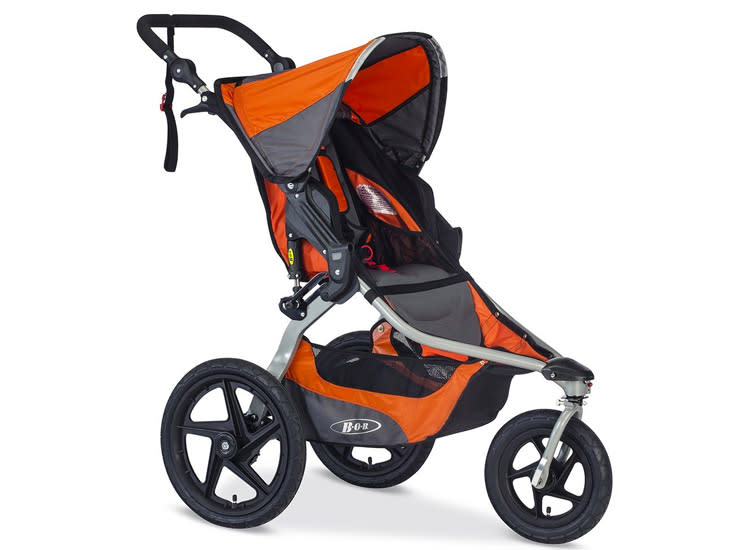 The Revolution FLEX inspires fierce loyalty among many parents. Two themes emerge in its reviews: Parents wish they had bought one sooner, and they’re happy they invested in quality. Like the BOB Ironman, it can hold a child as heavy as 75 pounds and the handlebar adjusts to fit parents of nearly any height. But unlike the Ironman, the front wheel can be set to swivel so you can take this from crowded sidewalk to skinny-aisled shop. It accepts any infant car seat with a separately sold adaptor, but the Britax BOB B-Safe is made to match. 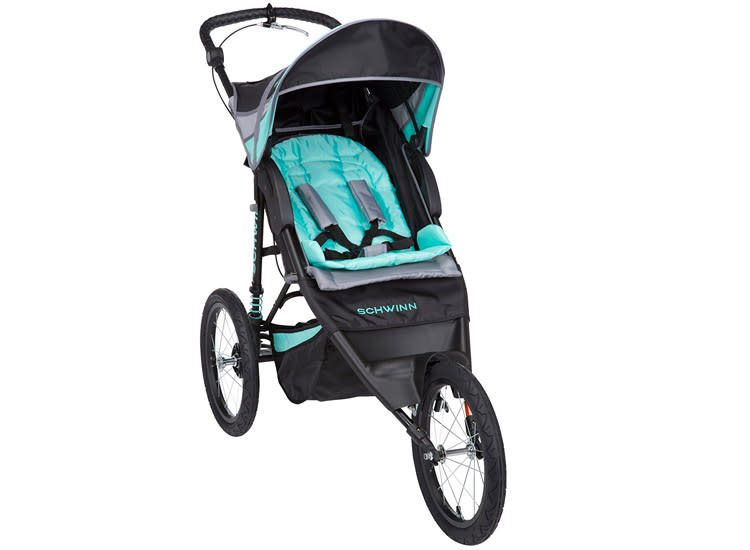 Schwinn’s jogging stroller doesn’t have a lot of bells and whistles—which makes it a sleek traveling machine on generous 16-inch wheels. Reviewers note that while it’s not for grocery shopping (it doesn’t hold a car seat and its forward-facing front wheel can’t swivel), but man, can it go when you’re ready to run! 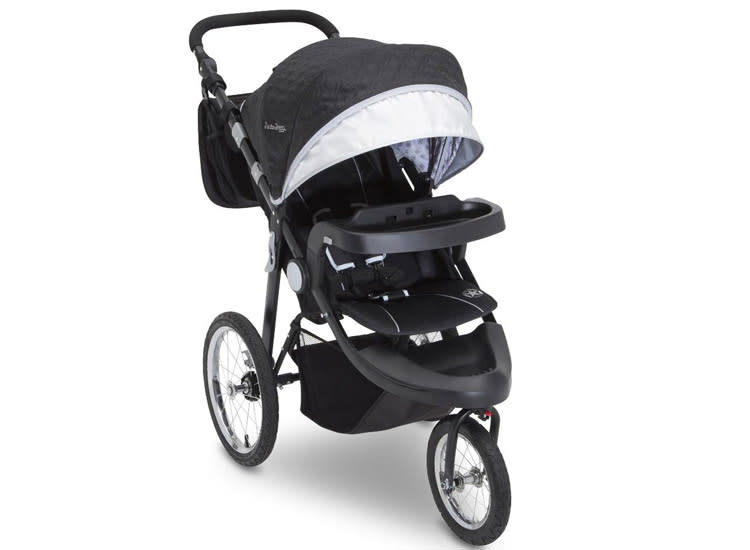 Image: Courtesy of J is for Jeep

A Jeep jogging stroller can be your running buddy, but it’s tricked out to roll more like a luxury vehicle for its rider. Its extendable canopy serves as a full-cover roof, and the tray serves up snacks for hungry babies on the run. The parent organizer detaches so you can take it with you when you leave the stroller parked outside.

Buy it: J is for Jeep Brand Cross-Country Sport Plus Jogger Stroller, $200, Amazon.com 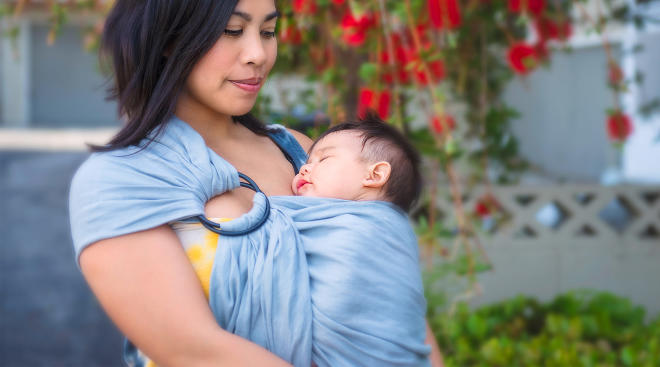 Babies ‘R’ Us Is Making a Comeback 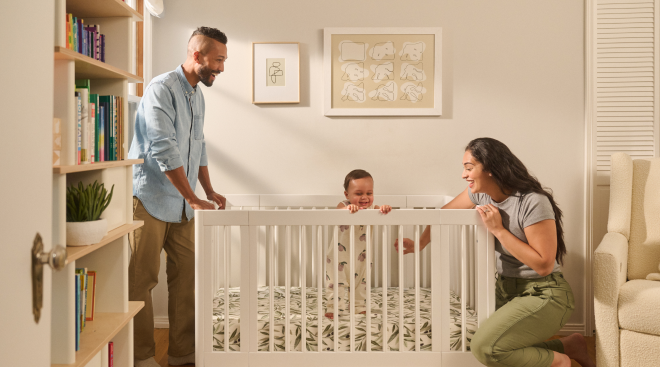 How to Choose a Crib That Grows With Baby
ADVERTISEMENT

The Best Toddler Backpacks for Daycare, Preschool and Beyond