The spark definitely doesn’t have to fizzle out the moment you and your partner become parents. These out-of-the-box methods will keep the fire alive (and burning!) for both of you.
Save article
ByKylie McConville
UpdatedMar 2017 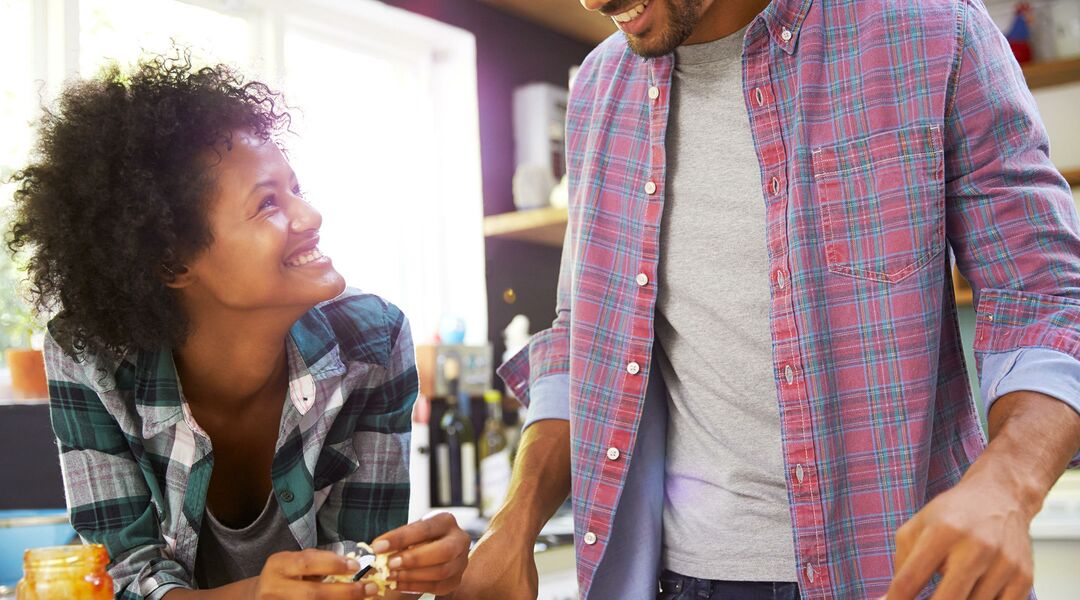 Back in the day, you and your partner were used to doing it whenever—and however—you wanted. But since baby’s big arrival, your schedule has, um, changed a little. Let’s be honest: What used to be passionate lovemaking sessions have now turned in to five-minute quickies while baby naps in her sleeper, right? Trust us, you’re not alone!

As a new parent, you shouldn’t strive to meet some “norm” when it comes to sex. “When a new parent—or anyone, really—feels like she has to meet a certain sex ‘goal’, and she doesn’t, she feels like a failure,” says Emma K. Viglucci, relationship expert at MetroRelationship.com. “You don’t want to strive to meet a certain norm, because that doesn’t exist.”

But that doesn’t mean that sex can’t be fun again. Here are some quick-and-dirty tips on how to bring the passion back post-baby:

Forget your “mom” and “dad” jobs
Shed the parental titles—and obligations!—for an hour, an afternoon or a night and revisit the things you loved before you had a baby. “Try planning a different kind of date than you’re used to,” says Viglucci, “because it will stimulate your senses.” And that sounds pretty sexy!

Justin Kelly McClure, founder of OnlineDatingCritic.net and author of Pray Your Kids Are Ugly, notes that there are ways you can forget to be a parent for a minute. It doesn’t mean you want to forget baby, but you want to remember why you became a couple in the first place. “Sex shouldn’t be the only way to keep your relationship healthy and strong,” he says. But it sure can help.

Doing something as simple as calling a babysitter and sneaking over to your partner’s office for a quickie in the backseat of the car will make you feel rejuvenated and remind you that you’re a woman and a mom, not just one or the other.

“When you have a child,” says McClure, “you should look at your partner and remember why you’re attracted to them; that doesn’t change just because he’s now a father and you’re a mom.” You can even use the everyday mom-and-dad-hacks, like texting, to remind each other of your physical desire. McClure says that dropping a quick note (and we definitely don’t mean the hey-can-you-pick-up-extra-formula kind) is a simple way to keep the excitement alive.

Take care of yourself
We know, it doesn’t sound like the sexiest thing on the planet, but taking care of your physical and mental needs plays a huge role in your bedroom desires. “You need to replenish yourself,” says Viglucci, “and be responsible for your basic needs, because that’s what’s going to help get you through the day.”

She adds that for nursing moms, something as basic as drinking plenty of water—remember that eight glass rule!—to keep themselves hydrated can do wonders for their mental health. “As a new parent, you need to be mindful about what basics you need to have met in order to feel good about yourself.” So if your partner likes to de-stress for 30 minutes in the tub, let him. It’s important to keep the things that make you feel like, well, you, in the picture.

The key, McClure adds, is to “keep in mind the things that you both loved to do before you were parents,” whether that’s unwinding with a Vampire Diaries marathon for two or cooking up a storm together on Sundays.

Get creative
Come on, you’re a mom now! You’ve mastered the art of nursing and folding laundry in tandem and prepping baby’s first solids while making your mortgage payment, so this whole sex thing shouldn’t seem like as much of a daunting task as it probably does. It’s really all about thinking outside the box.

“My husband and I used to have sex in the closet at our house,” says Emma B. “Don’t ask me why, but that’s just where we would go when the baby was sleeping. We felt like it was the one room in the house that wasn’t littered with toys and receiving blankets. It wasn’t very big, and we usually just used the room for quickies, but that was our kid-free space.”

Jolene H. says that she and her partner would “call a babysitter and go to a movie. We would make-out like teens. It was hilarious! We even got caught once.”

Express yourself
Whether it’s an extra 15 minutes in the bathroom in the morning or a girls’ night once a week, you shouldn’t be timid when it comes to voicing the things you need. “Getting what you want can’t happen if you’re stuck in your own head,” McClure says. “That’s what gives way to insecurities.”

“Voicing your frustrations and letting your partner know what you’re missing or what you need is the best place to start communicating,” he adds. Basically, if your partner isn’t pulling his weight when it comes to the dishes, tell him. And no, that’s not too petty. The longer you sit on that anger, the bigger it gets.

“For women, it’s especially important to speak up before they get to that ‘ bossy place’ where you start barking orders, because once you get there, no one wins,” Viglucci says.

Being honest about what you want—whether it’s a morning to sleep in, or a back massage to get in the mood—clues your partner into just how important your needs are. If you need sex to be quick tonight because you’ve got a 9:15 am doctor’s appointment, speak up and ask for it. And if you need to cry at the end of the day, do it. Being a new parent comes with a ton of baggage nobody preps you for, so take it as it comes, and don’t be afraid to speak up.

Stay far away from these no-no’s
“Just because you’re not having as much sex as maybe you’d like to doesn’t mean you’re a failure,” says McClure. The exciting (and important) part is that you both tried to have that passion with each other—even if baby did start screaming halfway through. But what you should never do, he says, is start leaning on baby as a reason to dismiss sex altogether. “Don’t make baby the excuse,” he says, “because that’s when you start to become dull and uninteresting to your partner.”

Another thing to stay away from? Making it all about the kids. Having a child is a huge responsibility, but it doesn’t mean that’s the only thing that’s left. McClure says that it’s important to ask yourself why you had a child in the first place–to create a family with someone you already loved and, you’ll recall, were attracted to!

Make time for each other
Seems like a no-brainer, right? Well, as simple as it sounds, it’s way harder to make time during the day that’s solely for each other. You need to have that time so you can look at your partner as a person instead of just seeing them as a parenting partner,” Viglucci explains.

And though it sounds like a chore—really, who has the energy at the end of the day to make more time for their partner when they could be sleeping, or folding the laundry, or eating your first real meal of the day?—Viglucci notes that the time you spend in that adults-only space will trigger all that pent up passion, attraction and sexuality. And maybe later, you can share that bowl of pasta that’s been calling your name all day.

Some names have been changed.

Sex After Baby: What the First Time Is Really Like

Q&A: No Libido After Giving Birth?