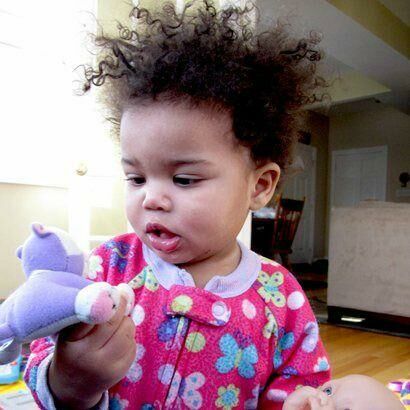 Just when I thought I was done with all my Christmas and birthday shopping (Lovie turns 3 just four days after Christmas), Lovie starts telling me that she’s going to tell Santa that she wants “a new dolly with lots and lots of milk and a doggie.”

Uh, a doll was not something I bought — and for selfish reasons, I admit. I hate dolls. And the color pink. And princess crap. All of which Lovie adores. I couldn’t have a more girly girl if I asked for one. Which I didn’t. Because I hate girly stuff.

So where does she get it from? And why? Why can’t she like LEGOS and soccer and playing with trucks? Why does she have to love dolls and playing dress-up in the frilliest of dresses so much?

Because she’s my Lovie, that’s why. And while I may not like the dolls, the pink, the princess attire, I love my Lovie so much that I’m actually (dare I say it out loud) growing accustomed to the pink, the princess, the dolls. I adore watching her be girly, goofy, sweet, loveable, pink-princess-loving Lovie. And I love watching her believe in the magic of the season, so I’m putting on my mom panties and getting her “a new dolly with lots and lots of milk and a doggie” for her to open from Santa. (Just in case the real Santa forgets!)

Now I just need to figure out which one because apparently there are like 16 thousand varieties of dolls out there.

What are you getting your kids for the holidays? Is it something you hate?