The rundown on the wackiest baby monikers we’ve heard this year. 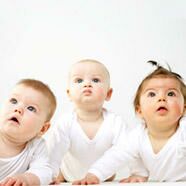 It’s no secret that celebrities have a long track record of cranking out some cringe-worthy names for their offspring. Last year, it was Bronx Mowgli and Zuma Nesta Rock that left us wondering. But this year, Hollywood’s moms and dads stepped up their A game. While the rest of us were busy naming our babes oldies but goodies like Emma and Noah, celebs were taking things to new lows. Read as we weigh in on the headline-making baby names of ’09 that had us all shaking our heads.

Our take: Okay, so they had us at Harlow; but Sparrow? Just what exactly Nicole Richie and Joel Madden were thinking when they named their second baby after a small bird is beyond us. To be fair, throwing in “Midnight” definitely helps make the kid sound a little more badass, but let’s be honest — with a name like Sparrow, he’s going to have a pretty tough time on the playground.

Our take: We don’t know about you, but Heavenly Joy sounds more like an eau de toilette spray we used to wear back in junior high than a name for baby. And we’re going to have to subtract a few more points for overkill. We give a big thumbs-down to this one.

Our take: Let’s not beat around the bush: Sharing a name with a giant book of maps has got to suck. But we’re sure he’ll get plenty of advice on how to deal from his big bro, who’s stuck with the name Homer Laffoon for life. So far, he’s gotten the better deal in that family, but that’s not saying much.

Our take: We feel for this kid — growing up with the name Mars isn’t going to be easy, especially for a girl. We can already hear the fourth-grade jokes getting hurled at recess… But with a mom like Erykah Badu, we can’t say we didn’t see this one coming, considering she named her firstborn Seven Sirius. (For real.)

Our take: When you give your baby girl a name like Bandit, you’ve got to be more or less certain your kid’s going to turn out to be pretty edgy. At least, we hope this tot can do the name some justice; but that’s a pretty big cross to bear.

Our take: When your mom’s wacky songstress M.I.A., an ordinary life probably isn’t in your future. So we knew this poor kid would probably wind up getting a “unique” name. But Ikhyd? That’s the kind of name that gets you picked last in dodgeball.

Our take: Can’t say we were shocked by this unfortunate choice. After all, celeb chef Jamie Oliver and wife Jools seem to have a penchant for giving their kids names straight out of a _My Little Pony _episode. Their two other children have the lifelong tribulation of being named Daisy Boo and Poppy Honey.

Our take: We’re definitely not big fans of this one, but at least we can _sort _of see where they were coming from. After all, when your dad’s a famous rock star, you need a pretty tough name to make up for the fact that your last name is Flowers.