We have a few theories on why this may be the case...
ByStephanie Grassullo
Associate Editor
PublishedFeb 2019 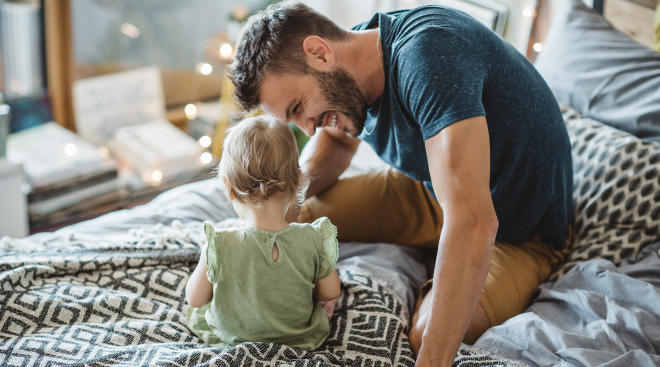 Most moms and dads have very different experiences when it comes to parenthood, which affects their overall wellbeing. And dads are happier than moms, according to a January 2019 study.

For the report, which was published in Personality and Social Psychology Bulletin, researchers analyzed three studies that looked at parents’ outlook on life, including happiness, wellbeing, depressive symptoms, psychological satisfaction and stress. In total, 18,000 people were surveyed.

The first two studies compared happiness of parents to those of people who don’t have kids. Researchers saw fatherhood was linked to greater wellbeing than motherhood. And fathers had greater satisfaction with their lives and feelings of connectedness to others than those without children.

But there are also a bunch of other possibilities to take into consideration. For starters, while postpartum depression is finally starting to get the attention it needs, many moms still feel pressure to hide their depression and anxiety from the public. This of course, only makes it harder to cope.

Another factor to keep in mind is the idea behind an additional January 2019 study, which looked at the “invisible labor” mothers take on. After analyzing mothers and fathers, the survey found moms handle the brunt of parenting roles, ultimately affecting their happiness.

With all that in mind, a super-important takeaway from the new study is the importance of your wellbeing. It’s easy to get caught up in the craziness of parenting, but remember to take a minute to wind down and do something that makes you happy. It’s not selfish if you have mom dates with your friends during the week. A support system of moms helps you navigate your way through motherhood.

Above all else, remember that happy parents make the best parents.