Multiple carrying options and a comfortable, ergonomic fit will make both you and baby very happy. 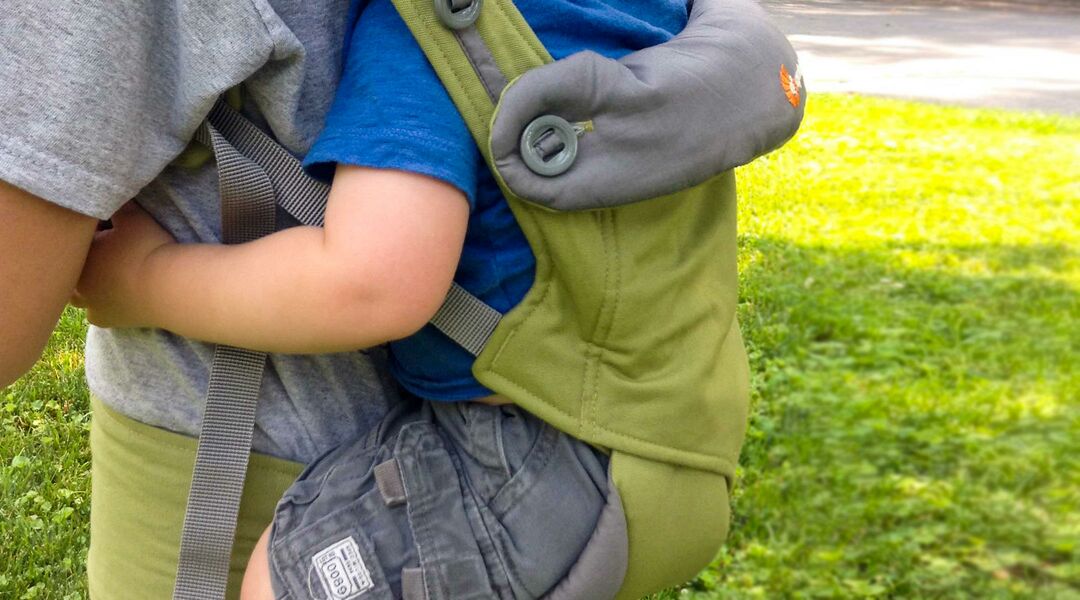 Bottom Line
Thanks to its smart design, the Ergobaby 360 is extremely comfortable for both you and baby and with four different carrying options and a helpful newborn insert, it’s going to be your best friend for the first two years.

Ready to register? Shop our catalog for the Ergobaby Four Position 360 Carrier. 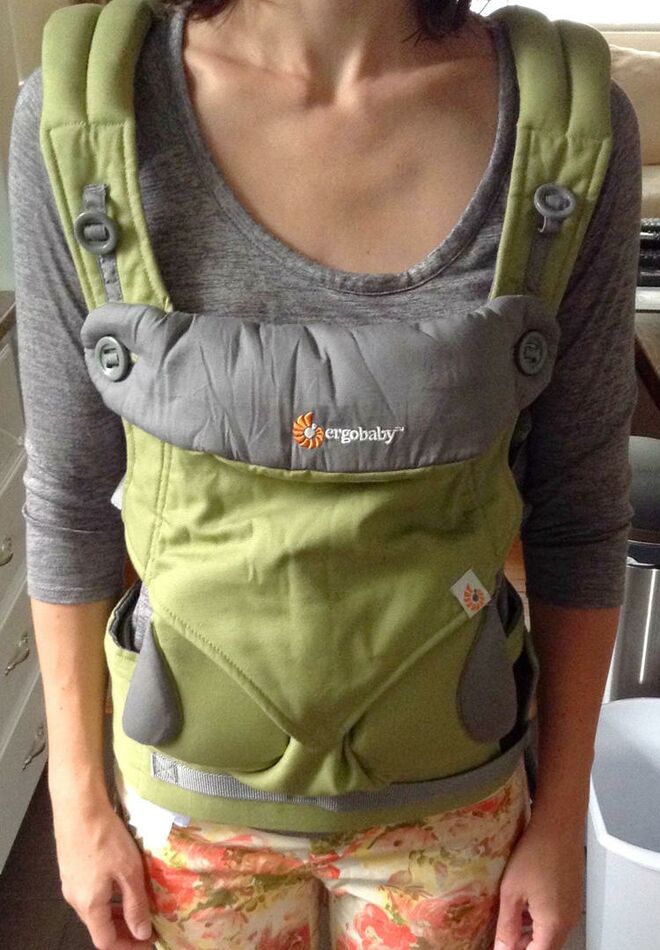 When my son was born, I was grateful to receive a hand-me-down front-only carrier from my sister-in-law. Since it was free, I wasn’t too picky, and I even put up with having to repeatedly adjust the X made by the straps on my back to avoid back strain. But by the time my son was 4 months and almost 15 pounds, I definitely noticed the toll of his weight on my upper back and shoulders, even after relatively short walks. And by toll, I mean it felt like tiny razor blades were slowly sawing away at my muscles. Not fun, especially because I liked walking to Mommy & Me yoga class with him and the studio happened to be over a mile away, so you can imagine how I felt by the time I arrived. Then a small miracle happened: A friend sent me the Ergobaby Four Position 360 baby carrier as a gift.

I felt the difference right away. The wide waistband, padded shoulder straps and horizontal back strap all helped with weight distribution, making it much easier on my body to carry my son. And because the origami-like carrying compartment opened up into a roomier pouch—unlike my previous model that was more like a sleeve—he seemed more comfortable too. It really felt like a little cozy dwelling he could snuggle into. While the Ergo kept us both toasty in the colder months, we definitely felt a bit hot in the summer. (Ed Note: Ergobaby recently came out with a “Cool Air” version of this same carrier made with breathable mesh for better ventilation. It retails for $180.)

The adjustable straps and the Velcro waistband are pretty self-explanatory, and it only takes a few minutes to put it on and then get baby situated inside for whichever position you’re using. Baby can sit front-inward, front-outward, on your hip and on your back. Since there aren’t metal buckles or snaps on any of the straps, I can even wear it going through airport security.

One thing the carrier is missing is pockets or pouches. That didn’t bother me at all but if you like carrying your keys or other small items, keep in mind you won’t be able to with the Ergo.

While I didn’t get to try the infant insert myself (the insert is sold separately for $25), my friend said she started using the carrier with the insert when her baby was less than a week old (it’s designed for 7 to 12 pounds) and he loved it right away. In fact, she swears it turned him into a sleeping machine.

I carried my son in the front position until he was about 20 pounds. The front-inward position was really ideal for us because he could comfortably nestle against me and even breastfeed without me having to take him out—all I had to do was loosen the shoulder straps a little so he could drop down while I was sitting. I certainly preferred that to having to deal with a nursing cover. 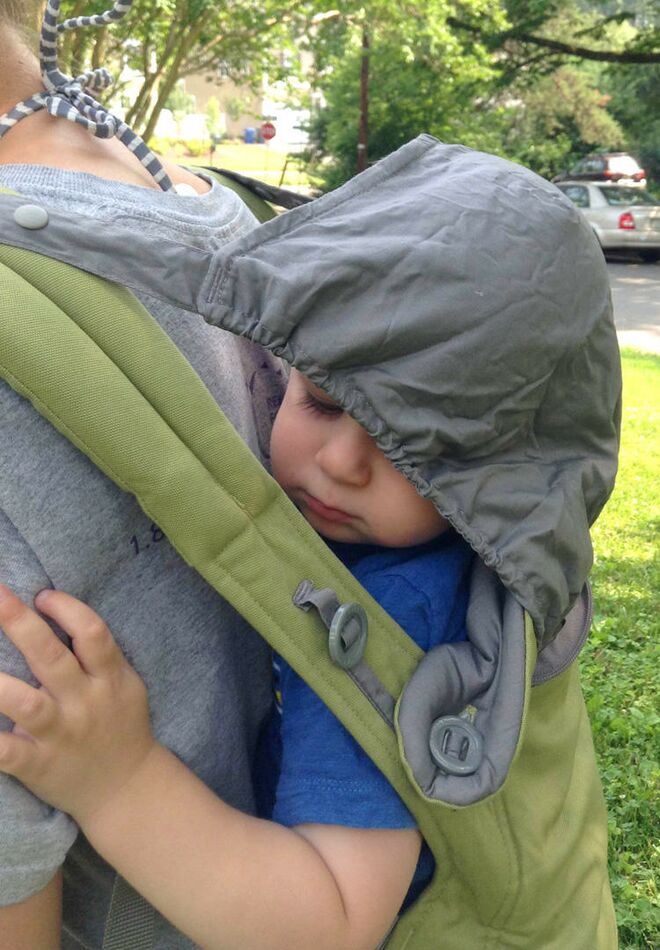 For non-naptime outings, I always propped him facing outward and he happily bobbed along. Once he started teething, the bib flap would get slobbery. But since it’s covered in cotton rather than canvas, the saliva was mostly absorbed and dried pretty quickly, so it wasn’t too icky. I would machine wash it once a week and it was as good as new. If your teething baby is prone to chewing on the straps, there are teething pads you can buy separately for $20 that easily snap on and protect the fabric.

I didn’t care much for the hip-carrying position, only because I couldn’t be bothered having to reconfigure the straps. The front and back positions are a bit more self-explanatory to use. With the hip position you had to do some cross adjusting and it wasn’t intuitive to me—at least not at first, but to be honest, I didn’t really give it a chance. I just preferred the other carrying positions much better so I never ended up using this one.

Of all the carrying positions, the back is my favorite because it gave me unlimited freedom to use my hands (coffee and croissant!). We used it mostly between a year and 18 months, before my son became obsessed with walking. It did take a bit of practice to get him into my “backpack” without my husband’s help—at the beginning I sort of felt like Cheryl Strayed in Wild, trying to maneuver her load—but once I figured out that leaning forward makes things easier, we were set.

My favorite part of the Ergo 360 is the little attachable cotton sleeping hood that’s conveniently stored in the front pocket and attaches to the shoulder straps. (Ed note: All of the hoods are made from fabric that has an ultraviolet protection factor (UPF) rating of 50+, which means it blocks between 97.5 and 98 percent of UV rays—except for the carrier in the taupe/lilac color option.) I often used it on sunny days to keep the rays out of my son’s face or to create a little shelter if he was napping in a busy setting, like a coffee shop.

I also want to thank whoever came up with the stretchy loops at the tip of each strap—once I’ve adjusted the carrier, I can roll up the ends of the straps and keep them in place with the loops so they’re not dangling everywhere as I’m moving around.

I was given the cotton carrier in green, which was nice but personally I would have preferred something more neutral like gray so it would go with whatever I’m wearing and also hide stains. You can also pick from seven other colors including taupe/lilac, black and dusty blue. 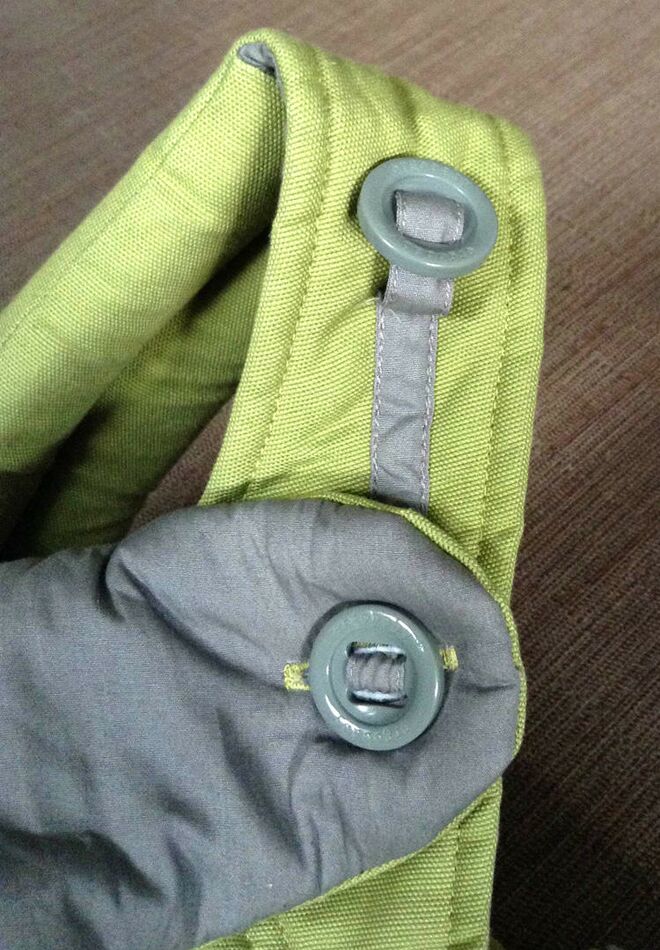 As much as I love my little kangaroo pouch, I can’t get over my annoyance at the Velcro belt—it’s beyond me why the designers would get rid of the easy-to-snap clip featured in earlier models for this method of securing the carrier. At first I liked the idea because it allowed me to adjust the carrier perfectly around my waist, but the more I used it, the more aggravated I became. First off, it makes me feel like I’m wearing one of those postpartum belly bands. But the worst: It’s just so loud as you pull it apart. I seriously have to go into another room to take it off when my son is asleep because I’m terrified it’s going to wake him up. It also doesn’t help that I’ve snagged a few sweaters and yoga pants when I didn’t line up the two sides of the Velcro perfectly. Plus, I often have a little collection of loose strings, lint and hair tangled in the bristles because I don’t always make it a point to connect both sides after I take it off.

Other than my pet peeve with the Velcro strap, overall the Ergo 360 is a lifesaver. Once you have it on, it’s easy to tackle everything else you need to do. Your movements don’t feel constrained and baby is safely tucked in so you can go on about your business. In addition to constantly using it for early morning walks (you know, the ones where you can barely muster energy to put on yoga pants, let alone start navigating a stroller), I often slipped it on for household chores when my son felt he needed more mama time. I even managed to make a chopped salad for dinner a few times. The adjustable straps and multiple carrying positions make me think that the Ergo was designed just for me and I imagine that it’s going to be even more valuable with baby no. 2!

Yelena Moroz is a freelance writer and stay-at-home mom based in Richmond, Virginia. She loves spending time outdoors with her son Bradley. When they’re not exploring local parks and playgrounds, you can find them trying out new foods—although, pretty much anything in noodle form is a hit with Bradley.