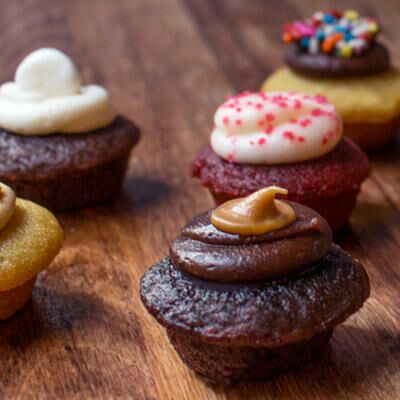 Melissa Ben-Ishay is the President and Chief Product Officer of the New York City-based dessert company  Baked by Melissa. When Ben-Ishay was fired from her job in advertising in 2008, she decided to do what she loved—to offer consumers the ultimate dessert experience. With the idea that people should be able to taste more flavors without a post-dessert guilt trip, Ben-Ishay personally develops all of Baked by Melissa’s unique, bite-size cupcake creations and product offerings. Baked by Melissa operates 14 locations and ships nationwide. Ben-Ishay is expecting her first child with her husband in February 2016.

I’ve been told that weird things happen to your body when you get pregnant, and for everyone it’s slightly different. For me, it was allergies. During the first trimester of my pregnancy I developed a sensitivity to gluten that resulted in hives all over my legs and an allergy to bee stings that landed me in the emergency room at 12 weeks and one day pregnant.

Early on in my pregnancy, when I couldn’t get the itching on my legs to go away, I made an appointment with an allergist. I had never been to one before. He took one look at my legs and told me that if I took gluten out of my diet they would go away. I didn’t want to believe him, because developing disease symptoms during pregnancy is pretty rare, and I’d eaten like a pregnant woman my entire life. In high school my favorite snack was a bagel with peanut butter, fluff, fudge and maple syrup. In college, snack time consisted of every kind of cereal we had on hand, in a red Solo cup with milk and hot cocoa mix. When I moved into New York City, I’d order a waffle with chocolate ice cream as dessert several nights a week. Needless to say, omitting gluten from my diet was not only difficult, it downright sucked.

Going out to dinner and having to ask the waiter if each item on the menu was gluten free was such a downer. I could not even believe that I, Melissa of Baked by Melissa, had developed a sensitivity to gluten! Food is my favorite thing in the world; food makes me happy. Here I was, newly pregnant and could finally eat whatever I want without feeling guilty, but I can’t eat all of my favorite foods! What?!

Of course, every touch of gray has a silver lining, and this gluten sensitivity is what ultimately led me to develop a kick-ass gluten-free cupcake for Baked by Melissa. I initially had a difficult time getting passionate about this project. I’d been working on a line of gluten-free cupcakes for over a year and couldn’t achieve a product I was happy with. As it turns out, my gluten sensitivity was a blessing in disguise. My goal: to make a cupcake, that when you tasted it, you couldn’t tell it was gluten free, and I believe we have. When I finally had a product I was confident in I did a company-wide tasting and everyone was blown away. Hearing everyone’s positive feedback was truly a dream come true for me.

At 20 weeks pregnant my gluten sensitivity went away. I was fortunate to speak to one of my friends who also experienced allergies during her pregnancy. She advised me to eat a little gluten once a week and tolerate it so the baby gets everything. I’m so happy she did, because it helped me to realize when I could get back to business—literally!