Is baby ready to move beyond exclusive breast milk or formula and try solid foods? Here's what to serve first. 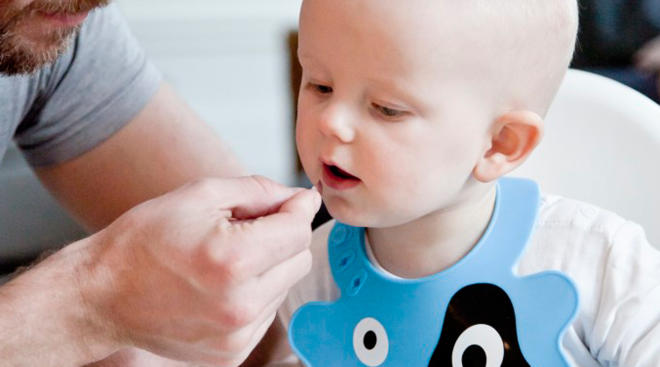 Babies are generally ready to start trying solid foods around 6 months, but it’s ok to start as early as 4 months. If baby is showing interest in other foods (think: grabbing for your chicken wings and staring at your cereal) and able to sit up in his high chair, it’s probably a good time to start. It’s best to run it past your pediatrician before starting the taste tests—the four-month checkup is a great time to ask.

While many parents think of the standard first food as single-grain baby cereal (often rice cereal or oatmeal) mixed with breast milk or formula, New York City pediatrician Preeti Parikh, MD, says there’s no official scientific data that says you have to start with that. Start with one food item a day—as long as it’s pureed—from whole-grains to strained, mashed and finely pureed fruits and veggies like bananas and sweet potatoes. Allow at least two to three days between each new food introduction to monitor for allergic reactions. And introducing new foods early in the day better allows you to be on the lookout for possible reactions.

At 9 months, it’s time to start introducing new textures. Baby’s diet should be similar to yours, but with much smaller pieces, since she’s still getting the hang of this whole chewing thing. Three meals and two snacks per day are ideal.

Stay away from honey until baby is at least a year old. Some pediatricians recommend against fish and eggs in baby’s first year, but there’s actually no evidence that early introduction to them can cause allergies. You can also introduce cow’s milk at 12 months. If he doesn’t like that, try cheese or yogurt instead. By now, most calories should be coming from solid foods. Don’t ever force foods—if baby repeatedly refuses to try something new, he’s simply not ready yet. And remember, baby still needs breast milk or formula until at least a year.

How to Make Your Own Baby Food

Baby Food Recipes for Every Stage

Best Foods for Baby (and a Few to Avoid)