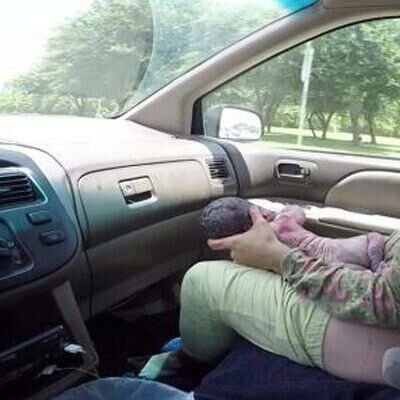 There were a whole lot of amazing moments—pregnancy announcements, baby milestones and dramatic births—caught on video this year. We’re counting down the ones that made you smile, laugh, cringe and even ugly cry (just a little).

Call it the labor locomotion: If there’s one trend that had our hearts skipping a beat this year, it’s watching moms-to-be show off their best dance steps while waiting for baby to arrive. And when Yuki Nishizawa danced her way through contractions (by breaking out some old school “Tootsie Roll” choreography), it brought a whole new meaning to the phrase “bump and grind.”

It was the year moms made big headlines for getting kicked out of retail stores, airports, government buildings and more simply for breastfeeding. Well one comedian mom had enough. YouTube vlogger Kristina Kuzmic shared her irreverent take on PDB (public displays of breastfeeding), showing the naysayers it’s not ridiculous at all to breastfeed behind a trash can or on the can in a public restroom.

It seems that the seventh time was the charm for the Lair family. After giving birth to six healthy sons, mom Cher and her “boy house” have gotten used to having a case of the blues. But that was all about to change. After cutting into a cake at her gender reveal party and finding out that she was finally expecting a girl, Cher let out the loudest shriek and literally hit the floor from the shock and excitement of seeing pink.

When Toronto-based couple Jen and Calvin decided to film a sex tape, they choose to do it in different spots around their city. But their public exhibition isn’t as explicit as it sounds. With Jen dressed as an egg and Calvin and friends outfitted as sperm (just go with it, folks), a comical chase ensues around the city before Calvin, the speediest sperm, finally catches up with the golden, err pink, egg and their pregnancy announcement is revealed.

To outsiders, it was an unexpected moment, but to those that know him well, it wasn’t at all surprising when Rajang, an orangutan at the Colchester Zoo in the UK, planted a big wet one (through the viewing glass) on a 37-week-pregnant woman’s belly. When her partner tried to get Rajang to replicate the move on his stomach, the dad-to-be was instantly rebuffed and motioned to step aside. No hard feelings though; after the video went viral, the Zoo wrote on Facebook that the inquisitive primate has always had a thing for belly buttons, scars, elbows and, of course, baby bumps!

A month before Joseph Gordon-Levitt announced that his wife had given birth to a son (they kept the pregnancy a secret), he dropped a major hint that he had babies on the brain with the mother lode of song parodies, “Sexy Motha.” No doubt inspired by JT and Andy Samberg’s “Motherlover,” JGL and a friend croon that “moms are like no other lovers” and that “a woman with a child always drives me wild.” JGL, you’re welcome to come serenade us any day.

The saying goes, “two is company and three’s a crowd.” But what happens when you get up to four? The answer is apparently ambivalence, as the Chapman family discovered when they received little fanfare to the news that they were expecting a fourth child. To show that any pregnancy is a cause for celebration, they rewrote the lyrics to Miley Cyrus’s “We Can’t Stop,” letting the world know via a homemade music video that “It’s our family we can do what we want to.”

When babies aren’t reaching their milestones, parents often worry. So when Ohio infant Piper wasn’t crawling yet, her parents took her to the pediatrician. The checkup opened their eyes to the fact that she was extremely farsighted. The easy—and extremely adorable—fix? A tiny pair of pink wraparound eyeglasses. When 10-month-old Piper was finally able to see her parents’ faces clearly for the first time, she immediately broke out into a heart-melting smile. If you weren’t one of the 47 million people to already view this sweet moment, we suggest you do it, STAT!

When Matt and Amelia Bookman welcomed son Teddy, they looked for a fun way to keep their long-distance family members involved in their first born’s growth and development. Their solution? Posting photos and video clips to their website and web series, which they edited into a two-minute montage. The time-lapse video includes snippets taken every two weeks starting six hours after birth that show Teddy hitting milestones like smiling, rolling over, self-feeding and walking (plus look for cameos by Mavis, the family pup!). It wraps with Teddy eating cake at his first birthday celebration—an adorable moment that hits the emotional sweet spot.

By nine months, many babies have learned to crawl and can pull up to stand. But little Ellie Farmer left those milestones in the dust and at that age she was already successfully scaling 8-foot climbing walls in her nursery (talk about some over-the-top decor!). Nicknamed “The Little Zen Monkey” by her competitive-climber parents, Zak and Rachael Farmer, who started bringing her to the gym as a newborn, Ellie, now 2, continues to take her talents to new heights with the skill and precision of a seasoned pro.

It’s practically part of the job description: parents going to great lengths to make their kids happy. And in Mikki Willis’s case, it meant crossing the (toy) aisle to do so, but a move he was more than happy to make. When his son Azai received two identical gifts, Willis took him to the toy store to pick out a new one. His purchase? An Ariel doll from The Little Mermaid. In a heartwarming message, Willis pledges his two sons a promise of love and acceptance “no matter what life you choose.”

Breaking the news to your firstborn that they’re going to get a sibling could go a number of ways. But 5 year old Ethan was more than ready to share the spotlight. While pondering mom Sarah Bromby’s ultrasound images, Ethan shoots off a series of rapid-fire questions ranging from excitement (“I’m going to be a big brother!”) to bewilderment (“Is it really in there?”), then offers up his bed to his future partner-in-crime. And his British accent makes the video that much cuter. In a follow-up video, Sarah reveals to Ethan that a little sister is on the way to which he happily shouts, “Ahh, yes!”

Talk about taking the show on the road! It takes a certain kind of chutzpah to opt for a natural birth, but delivering your own baby in a moving car, while staying calmer than most moms who give birth in a sterile hospital setting? That’s a whole other level of awesome! Lesia Pettijohn did just that while delivering her third baby en route to a Houston birth center. Bonus props to her husband Jon, who not only coached Lesia through pushing but also steered the wheel and steadily balanced a GoPro on his lap to document the momentous arrival of their (10 pound!) son Josiah.

Few people would object to getting an unexpected flower delivery at work, but Sharon Bloomingdale got a surprise gift that was waaay better: a new granddaughter. Three weeks earlier, her daughter and son-in-law, Laura and Josh Dell were approved to adopt a baby girl whom they named Ellie. But they decided to keep the news a secret until grandma Sharon and Ellie could meet face-to-face, which made for one very memorable–and emotional—introduction.

1. Best ‘We’re Having A Baby’ Reaction

As far as pregnancy announcements go, a bun-in-the-oven reveal is a timeless classic. But it was Arkell Graves’s reaction to the news that gave us all the feels like no other. After 17 years of trying to conceive, including a stillbirth and four miscarriages, his wife Dana stunned her husband with the unexpected news that she was 19 weeks pregnant with a baby boy. Within a month of her sonogram surprise going viral, Dana faced complications and had to deliver their son prematurely at only 24 weeks. But “Baby Bun” Kaleb Arkell Graves continues to defy the odds and get stronger every day.