The Real Story Behind the Chinese Gender Chart

Just how accurate is the famed Chinese Gender Predictor? We did a little investigating—here’s what we found. 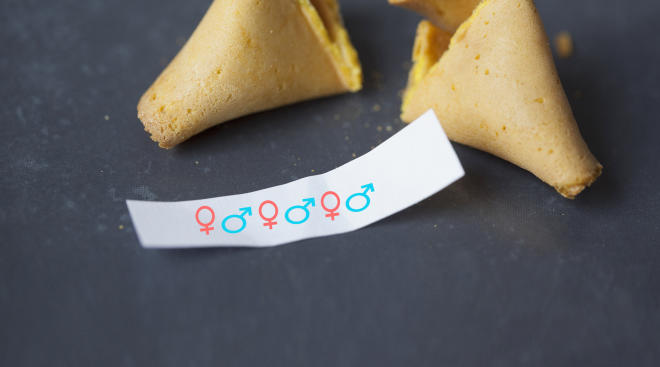 “Boy or girl?” It’s inevitably the first thing people ask when they find out you’re pregnant. The question is almost never “How are you feeling?” Or: “Why don’t you take a load off, and I’ll get you some tea?” And until the ultrasound or blood test results are in, it’s a question that’s top of mind for plenty of parents too. “It’s ingrained in us to envision what our family will look like, and part of that is the gender of our child,” says Jaime Knopman, MD, a reproductive endocrinologist at CCRM NY. “Knowing if you’re having a boy or a girl allows you to connect with your baby in a different way.”

What Is the Chinese Gender Predictor?

The Chinese Gender Predictor is a tool that supposedly tells you if baby is a boy or girl, based on the mother’s age and the month of conception. And over the years, it’s captured the curiosity of many a Western mom-to-be.

Of course, a 20-week anatomy scan can provide a near-certain forecast of whether baby is a boy or girl. (Which doesn’t even begin to address the fact that your child may end up agendered, nonbinary or anywhere else along the gender spectrum.) And for moms ages 35 and up, the cell-free DNA test or an amnio—typically prescribed to detect chromosomal abnormalities for older women—will make an accurate prediction as early as 10 weeks into pregnancy, says Sheeva Talebian, MD, who is a cofounder, with Knopman, of the blog Truly MD and also a CCRM NY reproductive endocrinologist. But there’s something irresistible about the Chinese Gender Predictor. It’s an online tool that’s easy. It’s interactive. And let’s face it: It’s way more upbeat than that other popular online tool, the body mass index calculator.

So exactly how does the Chinese Gender Chart work? When we say it’s easy, we mean it. Online tools vary, but for the most part, you simply plug in the month you conceived or baby’s expected due date, along with your age at conception or your date of birth. The tool will convert the variables into Lunar calendar dates (or at least it should), then—presto!—it instantly tells you if you’re having a boy or girl.

History of the Chinese Gender Predictor

According to one site, the Chinese Gender Predictor is 300 years old and based on a chart once kept in custody by dedicated eunuchs in the Qing palace, so the imperial family would be assured of producing sons. Another site suggests the chart was found in a royal tomb 700 years ago and is currently housed in the Chinese Institute of Science. We contacted the Chinese Academy of Sciences in Beijing (the closest thing to “Chinese Institute of Science” we could find), only to have a staff person kindly explain that they don’t house such an institute, much less possess the Chinese Gender Chart in question. Joanna Waley-Cohen, provost at New York University Shanghai and a history professor specializing in the Qing empire, tells us she knows nothing about the Chinese Gender Predictor but that “it sounds implausible and exoticizing.” Another historian who has written extensively about the health care of women in China, who prefers to remain anonymous, says the tool is “as authentically Chinese as a fortune cookie.” (Which is to say: It’s not.)

How Accurate Is the Chinese Gender Predictor?

Alas, the Chinese Gender Chart’s accuracy appears to be as vague as its source of origin, despite the widespread (but unsubstantiated) claim that it’s over 90 percent accurate.

When Eduardo Villamor, MD, DrPH, a professor of epidemiology at the University of Michigan School of Public Health, stumbled upon the chart in a maternity shop a few years ago, he was curious to seeing if it really worked. And so he applied the variables to 2,840,755 singleton births that occurred from 1973 to 2006 in Sweden, a country with meticulous population registries. He then checked his results against the actual gender of each baby and published his findings in a 2010 issue of Paediatric and Perinatal Epidemiology. His conclusion? It’s got about a 50-50 chance of being right. Ultimately, the Chinese Gender Predictor “is no better at predicting the sex of a baby than tossing a coin,” he wrote in the study abstract.

The Chinese Gender Chart’s accuracy isn’t exactly confidence-boosting, but other gender-prediction folklore can’t be trusted either. In a 1999 Birth journal article, Deborah Perry, PhD, then a doctoral student at Johns Hopkins University, systematically assessed the validity of various gender forecasting methods. She found no correlation between gender and belly shape, severity of morning sickness or comparisons to a previous pregnancy. Overall, only 55 percent of women correctly guessed the sex of their baby—“which is statistically no better than guessing by chance,” says Perry, now the director of research and evaluation at the Georgetown University Center for Child and Human Development. One surprising finding, albeit likely a fluke: The subjects who had at least 12 years of education guessed correctly 71 percent of the time (that is, better than by chance), and most of them chalked it up to psychological reasons, such as having a dream about baby or simply having a feeling.

The idea that you can time intercourse to influence baby’s gender doesn’t fly either. When Allen Wilcox, MD, PhD, a senior investigator in reproductive epidemiology at the National Institute of Environmental Health Sciences, set out to determine a woman’s most fertile days (an average of six days, ending on the day of ovulation, in case you’re wondering), he also tackled the issue of whether the timing of conception influences whether you have a boy or girl. The answer (you guessed it) is a resounding no. “We weren’t very surprised,” says Wilcox, who published the results of his landmark 1995 study in The New England Journal of Medicine. “There’s simply no good evidence that timing can affect gender, and the basis for which these claims are made are so silly and thin, there’s no reason to take them seriously.”

So what are we left with? Sheer chance. You’ve got an egg; he’s got hundreds of millions of sperm. The lone egg carries an X chromosome. The sperm carries either an X or a Y. If an X sperm combines with the X, then it’s a girl. If the Y sperm wins out, then it’s a boy. Under normal circumstances, your chance of giving birth to one over the other is 50-50.

As for the Chinese Gender Predictor and its underlying logic, that’s still a mystery. “For a chart to make intuitive sense to a researcher, it should represent an underlying pattern that could conform to a testable hypothesis, ideally in different settings,” Villamor says. “But the Chinese Gender Chart seems pretty random.”

What’s also puzzling, as Perry points out, is that the Chinese Gender Predictor focuses on Mom and completely omits Dad from the picture—the guy bringing the gender-determining X or Y sperm to the party.

But at the end of the day, consider the real point of the Chinese Gender Chart. You may not be able to completely trust its results, but we guarantee you’ll have a blast taking it. It’s meant to be an entertaining game, a welcome break from the tasks of the day and the stresses of pregnancy. With all of life’s daily pressures, don’t we deserve a little fun?