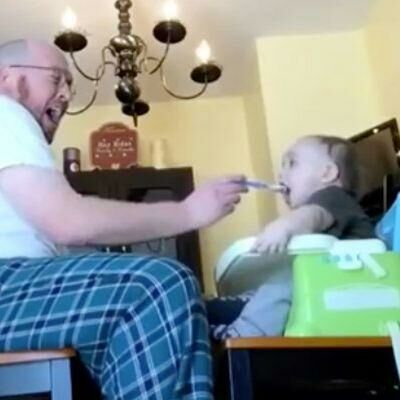 It takes a certain stroke of brilliance to create the perfect song parody, but one musically-inclined dad has created the perfect mixtape for mealtime: a series of food-themed lyrics meant to encourage his son to eat solid foods without a fuss.

Part-time stay-at-home-dad Charles Flartey has always enjoyed singing to his one-year-old son Tommy, but recently started revising the lyrics to coordinate with whatever food is on the menu. As a “little joke,” he posted some of the videos on Facebook for friends to see, which led him to create a YouTube account, " Charles Only."

In the last week, the Hopatcong, New Jersey father—who has sung in a few bands in the past—posted six videos with song lyrics set to the musical stylings of Gwen Stefani’s “Hollaback Girl,” an ode to bananas, and Lionel Richie’s, “Hello,” which really made Tommy’s afternoon Jell-O snack come alive.

Tommy may be his dad’s number one fan, but it’s clear that he’s not his only fan. Since Flartey’s speedy rise to remix fame, he and his videos have racked up hundreds of thousands of views and have been featured on morning television programs. He told NJ.com that while he finds it startling that he’s been making music for 15 years and “this is the thing that gets attention," he loves the fact that his son enjoys the songs so much.

Although he’s showed off his pop, R&B and hip-hop skills with clever lyrics, today he took a break from the parodies to cover a more classic tune: a happy birthday tribute to his favorite groupie. Who knows, maybe these remixes will encourage speech development and Tommy will start singing along with dad!