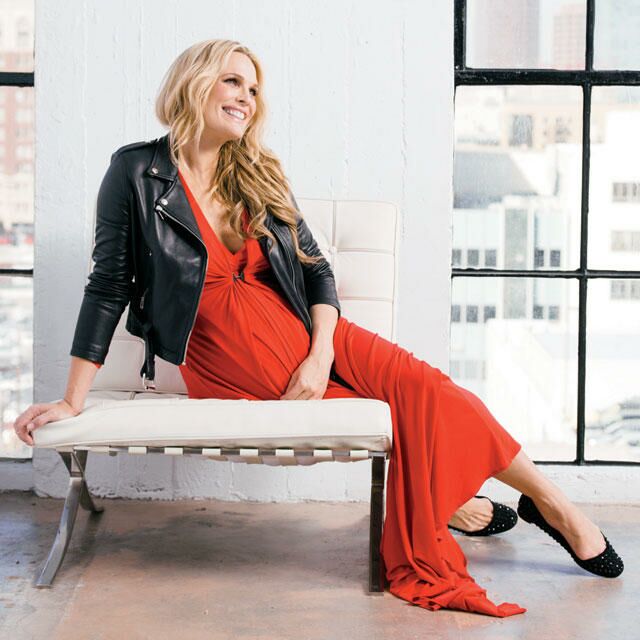 With baby number two on the way, the enterprising model, actress and author is about to put her expert multitasking skills to the test.

When it comes to merging motherhood and mogulhood, Molly Sims has proved she’s not just another pretty face. Whether she’s hosting a baby shower for military moms with Operation Shower, promoting her new book, The Everyday Supermodel, or potty training her almost-three-year-old son, Brooks, the model mom, who rose to fame after appearing in Sports Illustrated’s swimsuit issue, knows what she wants and goes for it—and does it all in her signature glamorous style. In fact there’s even a chapter in her book cheekily named “I Made That Sh-t Happen.” That dedication and drive is about to come in handy as she’s set to welcome a baby girl into her already-jam-packed world. And true to form, even as she’s days away from delivering, Sims is busy at work on a sequel to her book called The Everyday Supermama (in it, she’ll offer advice she’s learned from her two pregnancies) and taking time from her hectic schedule to share some of that stylish know-how.

The Bump What’s surprised you most about this pregnancy?
Molly Sims How completely different it’s been. With Brooks I gained almost 80 pounds, I was swollen and retaining fluid, and I had bad melasma and acne. But since I’d never been pregnant before I didn’t know—I just thought this was how it was supposed to be. With baby number two, I’ve only gained about half of that and I’ve felt much more energetic. My melasma hasn’t gotten bad, and, the best part, I haven’t had a single blemish.

TB You’re 41. Did that make this more challenging in any way?
MS I got pregnant with my son at 38 while on my honeymoon, but I had a harder time with her. People always think, “Oh, you have to take care of yourself once you get pregnant, or when you have the baby,” but your body is like a garden. You have to feed it and make sure it’s fertile before you even start trying. I saw a great acupuncturist who put me on fertility teas, and I worked with Lori Bregman, a phenomenal coach, who really helped me get ready to have this baby. She was my support system, and I swear by her fertility smoothies, which I drank every day.

TB How did you stay fit this pregnancy?
MS I did a lot less cardio and a lot more Pilates. I still did Tracy Anderson and spinning, but I took it much easier. My body just didn’t feel like I needed it, especially in the middle months, and I didn’t want to push it as hard. Some days you have energy, and some days you feel like you’ve been hit by a bus. It’s so important to really listen to what your body is telling you and go with it.

TB Did you have any weird cravings?
MS Citrus. With my first pregnancy it was apples, but this time around I’ve had so many mandarin oranges and grapefruits to the point where I got gastritis. It’s really painful, but I can’t stop! Normally I don’t even drink OJ, but this morning I drank it straight from the jug. It’s so weird.

TB We heard you and your husband, Scott Stuber, had a process for picking a name last time. Are you doing it again?
MS Yes. Scott is pretty much obsessed with the name. He wants it to represent not just when they’re a newborn but also how it will sound in a board meeting. He’ll do crazy stuff like announce the name like a football player—“Brooks Stuber, number 59 for the Patriots!” He also makes PowerPoint presentations with columns so he can see first names with middle names.

TB So what’s your supermodel secret to getting your postbaby body back?
MS Aside from working out two hours a day, I wore two pairs of Spanx for nine hours a day for four months after Brooks. It totally sucks, but it helps with the elasticity of your skin. Some people believe and some don’t, but I know it 100 percent helped me keep everything in and I plan to do it again.

TB What’s the best advice your mom gave you about pregnancy and parenting?
MS My favorite thing is that there’s not one path. There’s not one formula, one way to potty train, one way of doing anything. I love that because moms always think, “Oh, I’m not doing it right!” and that’s just stupid. If someone tries to tell you there’s just one way, don’t listen to them.

TB Are you nervous about welcoming a second baby into your life?
MS I can tell you the things I stressed about with Brooks like breastfeeding—he was born with a tooth like a vampire!—I won’t stress about with her. I’m actually more worried about Brooks. The time we had with just him has been amazing. I’m so excited for our daughter to arrive, but at the same time I’m going to miss that alone time with him. It’s something I really cherished these past two and a half years.

Dress tighter “The tendency is to dress bigger, but don’t be afraid to flaunt your bump. Stretchy material will be your best friend—I love long, tight tanks and stretch pants that hold you in.”

Treat yourself “You can’t control all the rapid changes in your body, but you can get a blowout, go for a manicure or pick out a new outfit. When you look good, you feel good and vice versa.”

Stick to your style “Just because you’re pregnant doesn’t mean you have to give up on style. You can still be on trend— try accessories! Those extras go far to dressing up maternity basics.”

Go au naturel “Your skin is the biggest organ. Whatever goes on it goes into baby. I use organic products free of parabens. I love almond oil for my belly and a lavender oil bath.”

Is Peeing When I Sneeze Normal?

What’s Going on With Your Hair During Pregnancy? (WATCH!)

How to Ease Itchy Skin During Pregnancy

What Is Couvade Syndrome?

14 Memes That Sum Up Your First Trimester

How Preeclampsia Could Help Cure Cancer

Here's Why You Can't See This Pregnant Woman's Baby Bump

I’m Pregnant With Twins. When Will I Show?

The Difference Between an Embryo and a Fetus

Why Your Belly Button Pops Out During Pregnancy