10 Celebrities Who Rocked Bikinis While Pregnant

Baby bump and bikini… why not? 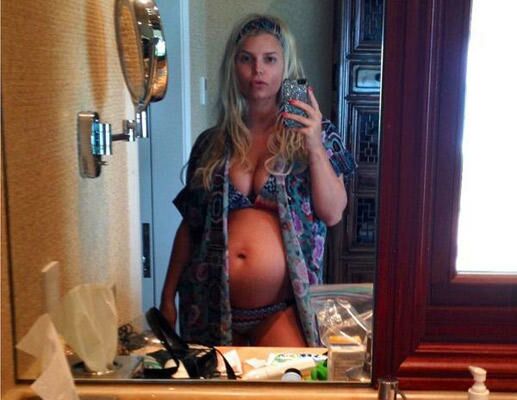 She’s on baby number three, and she’s throwing caution to the wind. (Kourt’s the one on the left in the gray bikini.)

A string bikini was just fine for Shakira, even at the end of her pregnancy in 2013. The Colombian singer and soccer-player husband Gerard Piqué posed for a gorgeous — and shirtless — maternity shoot to benefit Unicef.

There’s no denying how good Alessandra Ambrosio looks pregnant — after all, she is a supermodel. This 2012 photo shows her family is adorable too.

This Jersey Shore star hit fans with a selfie during her second pregnancy in 2014, eager to share her bump. “Totally bikini ready this summer,” she tweeted.

David Beckham snapped this pic of his wife while she was pregnant with Harper in 2011. He claims on his Facebook page that he “took it while she wasn’t looking.” Really? Who looks that radiant un-posed?

Vanessa’s not trying to claim that this maternity silhouette isn’t staged. She had it taken in 2012 to accompany her blog post about the best places to go on a babymoon.

We love the boho-style halter bikini Bethenny Frankel wore on her St. Barthélemy honeymoon (and babymoon!) in 2010.

Stacy Keibler’s Instagram is full of pregnancy glam-shots, and this photo from Mother’s Day 2014 is especially sweet. “Can’t wait to spend next #MothersDay with this little angel in my arms,” she wrote.

Celeb Moms We Love to Hate