When gestational surrogate Crystal Kelley was told to abort the baby she was carrying, she did what she felt she had to — skip town.by Jennifer Benjamin 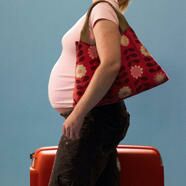 On her way home from an ultrasound appointment, surrogate Crystal Kelley got a frantic phone call from the baby’s intended mother. “I could barely understand what she was saying, but it was that something was wrong with the baby, and they didn’t know what they were going to do,” she says. “I thought I’d seen a cleft palate on the ultrasound, which is no big deal, so I kept telling her that it would be okay, that we would get through it.” Immediately afterward, the doctor’s office called Kelley, telling her that not only did the baby have a cleft palate, but also, there was something wrong with her heart, she had a cyst in her brain, and they couldn’t find her stomach.

A few days later, Kelley was asked to do something she considered unthinkable: abort the baby. Kelley told the mother she wasn’t willing to terminate unless the doctors believed the child wouldn’t live. And it’s not because she’s staunchly pro-life. In fact, Kelley claims she’s pro-choice. But she has a daughter who was born with a heart defect, which was completely corrected by surgery, and a sister living with severe epilepsy, so she’d seen firsthand that disability doesn’t devalue a person’s life.

“It’s not that I felt like she was mine. I still felt that this was the intended parents’ child,” she explains. “But at night, I would sit with my two-year-old snuggled up against my belly, and this little baby inside of me would kick. She was feisty and active. She felt strong, and I believed in her. And I believed that I had a responsibility to take care of her.”

For weeks, Kelley ignored letters from the surrogacy agency, warning her that she was in breach of contract, that she would have to terminate the pregnancy as soon as possible. And then, the surrogacy agent asked her to meet for lunch. “She was really pushy. She kept talking to me about my two little girls, about what would happen if the intended family came after me for the thousands of dollars they already had spent on the pregnancy,” she recalls.

The agent offered Kelley $10,000 to have an abortion. Kelley, who was uncomfortable with the conversation and being put on the spot, countered with $15,000. But after she went home and talked it over with her mother and her daughters’ father, she knew she wouldn’t be able to do it.

Kelley decided that the best thing to do was to skip town. The laws in Connecticut, where she was living, dictated that if she gave birth to the baby there, she would have no rights to the child because they weren’t biologically related. That meant that if the intended parents didn’t take the baby, the child would be put into foster care. “I couldn’t let this poor, disabled baby get lost in the system,” she says. “I wanted her to have a happy and loving home.” So she moved with her two daughters to Michigan. There, Kelley would be considered the baby’s legal parent. Plus, the town she settled in had one of the top four pediatric cardiology hospitals in the country.

After a lot of debating, Kelley decided she didn’t have the money or other resources to raise the child herself. She’d recently lost her job, broken up with her boyfriend and was raising two daughters. She’d made friends with a couple from New England who already had four children with special needs, two of whom were adopted. At first she was talking to them to get information about raising a severely disabled child. Ultimately, they decided to adopt the baby.

On June 25, 2012, Baby S was born, breathing on her own and screaming before she was out of the birth canal. She was one of the biggest and healthiest babies in the NICU, but she had a rough road ahead. She was diagnosed with a brain defect and several heart defects. She’s also been diagnosed with cerebral palsy and a pituitary-gland disorder. Despite having filed to have their names on the birth certificate before her arrival, the intended parents signed over their rights. On July 11, the adoption was put through the court system, and in August, the baby was moved to a hospital near the new family’s home in New England.

“At nine months old, she’s a happy baby who makes eye contact, smiles, babbles and plays with toys,” says Kelley. She doesn’t have very good trunk control, but if you hold her up, she’ll stand and bounce on your leg. She isn’t mobile yet, and maybe she’ll never be, but her parents and I believe she’ll walk one day. I think she’ll do even more than anyone ever expected.” Kelley doesn’t have contact with the intended parents, but she knows that they’ve met Baby S and that they’re in touch with the adoptive parents through a social worker. So they do check in on the baby that they chose not to raise themselves.

Kelley went public with her story in March 2013, on CNN and through other news outlets. It wasn’t received well.

Some women from the surrogate community believe that she has broken their code. “They kept telling me that I was a horrible person, that I should never have been a surrogate if I was pro-life, that it wasn’t my choice to make. They all had valid opinions,  and they’re entitled to them,” Kelley admits. “That being said, I don’t think I did anything wrong. I told the family what my stance was all along, so I was never dishonest. I did what I had to do to make sure the baby ended up in a loving home.”

On the flip side, she received a lot of support from the pro-life community, which doesn’t surprise her. She also had support from online “due-date groups,” other women who were giving birth to June 2012 babies.

She believes a lot of the backlash is due to misconceptions people have about her and her motives. “People think I did this for myself, that I wanted money and didn’t take anyone else’s feelings into consideration,” she says. “I wasn’t reckless. I spent a long time debating with myself, talking with other people, trying to resolve issues before they became what they were. To anyone who thinks I did this for money, I’d love to know where that money is, because I could use it right about now.”

But Kelley does have regrets and wishes it all could have turned out differently. “I had this idea of what surrogacy would be. That you carry a child for a loving family and then hand the child off, knowing you’ve given them a gift: this baby that they wanted so much. Then, for the rest of your life, you get updates about the child that you helped create for them. It’s just not what I wanted, and I know it’s not what they wanted,” she says. In hindsight, she believes things could have been much different if the agency had required them not to cut any corners and to undergo counseling. “We should have had a conversation with a psychiatrist, about what could happen,” she says. “If I’d known that they didn’t want to bring a disabled child into the world, I wouldn’t have been their surrogate. Then again, Baby S wouldn’t be here if they had used someone else.”

“Why I Became a Surrogate”