How do I know which foods to give baby at each age? 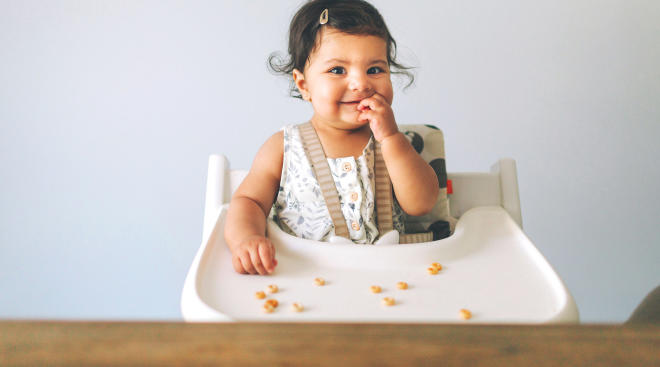 The American Academy of Pediatrics (AAP) recommends starting solids around six months. Some babies go a little earlier or a little later — take your child’s lead. Seriously, she’ll send the message loud and clear that she’s ready. Signs of readiness can include opening her mouth for the spoon, sitting upright with support, mastering head and neck control, and taking interest in what you’re eating.

Once baby gives you the green light, you’ll need to decide what to feed her first. Experts recommend introducing one new food at a time and avoiding honey and cow’s milk until baby turns one.

Traditionally, pediatricians have recommended that infants at low risk of food allergies start with rice cereal, which mixes easily with breast milk or formula. “It’s easy to give in terms of taste,” says Satya Narisety, MD, assistant professor of allergy and immunology in the Department of Pediatrics at Rutgers University. “It’s a change in texture but not taste, so it’s more likely to be tolerated.

But plenty of parents skip the cereal and jump right to a pureed fruit or veggie, and that’s perfectly fine too. “There are no absolute rules on this,” says Steven Abrams, MD, a professor of pediatrics at Baylor College of Medicine. “Parents should determine which tastes their babies like and follow their cues.”

After the first feeding, Narisety recommends moving quickly to white fruits, like apple, pear and banana; yellow and orange vegetables, like sweet potato and squash; then on to green veggies, like peas, and ground meat, if you’re not a vegetarian. “Every three or four days, try a new food,” she says. (Keep an eye out for any sort of rashes, swelling, crying, obvious discomfort, vomiting or diarrhea — these are signs baby may have an adverse reaction to a certain food.)

In the beginning, offer baby two ounces of food per meal and slowly increase it to four if she has the appetite for it. During this time, you might notice a slight drop-off in the amount of breast milk or formula she’s drinking. This is normal, Abrams says, and is something baby will self-guide.

No one likes to waste food, but prepare yourself for the possibility that your child won’t enjoy eating certain things — at least at first. If she’s dead-set against mashed banana right now, for example, keep offering it to her over the course of several months. Oftentimes, babies need to be exposed to a particular food up to 10 to 15 times before they accept it.

You may also have to get a little creative with how you prepare and present the food. Let’s say baby won’t go anywhere near chicken. Instead of serving up yet another chicken puree, try changing the texture so it’s a little chunkier (when she’s developmentally ready, of course). Then, once she’s okay with that — and again, developmentally ready — test out baked chicken or baked chicken nuggets. It’s the same food, just in a different form.

Once baby can sit up completely independently, grab and release food, bring it to her mouth, chew food (yes, with her gums) and swallow, it’s time to introduce finger foods and snacks. (The AAP ballparks it around nine months.) Give baby two or three healthy snacks per day in addition to the pureed foods she’s already eating.

You may start with rice crackers or rice puffs, move on to soft fruit wedges and then Cheerios, noodles, beans, cooked vegetable pieces, and tender pieces of chicken and other meats.

Aim for baby to eat a grain, a fruit and a veggie every day. And eat the healthy stuff yourself. “Being a good example is very important,” says Narisety. “Kids see it much earlier than you think they do.”

It’s also good for baby to get into a routine. “Have set meal times, and have everyone eat together so kids understand sitting at a table, in a chair, with their parents,” Narisety says.

Baby Food Recipes for Every Stage