People don’t always think before they speak, but when the subject is fertility, a quick comment can be hurtful. Read on for what TTCers wish they’d hear instead, plus, some kick-A comebacks.
ByCaitlin Brody
UpdatedMar 2017 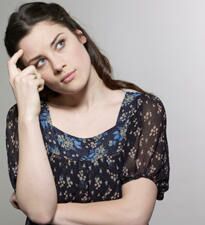 "Typically, the people who say this have never dealt with infertility. Not to mention, this just makes me stress more! I wish people would be supportive instead.” — AndieD6709

What to Say Back : “I don’t think relaxing will lower my FSH levels. Thanks, though.”

“It will happen once you stop trying.”

“It’s not as easy as being able to just stop trying. You can’t just stop trying to have a family. It’s much better to say something encouraging like, ‘How can I help you through this?’” — _HopefulMommy _

What to Say Back : “Really? I thought you _did _have to have sex to make a baby!”

"Infertility strikes all types of people — it doesn’t discriminate based on physical appearances. The best thing people can do is ask how they can be supportive. The answer will be different for each person, but it’s nice to know someone is there for you.” — steveandkim2

“It’s a sign that you and your husband wouldn’t make healthy babies together.”

“Instead of hurtful statements like this, I think the best kind of support comes from friends and family who remember when your treatments are and text you afterward to see if you want to talk. Sometimes I don’t want to talk about it, but it’s nice to know they’re there for me.” — AmyD583

What to Say Back : “That’s a really horrible thing to say.”

“Wouldn’t you rather just settle for being the cool aunt?”

“It’s important to remember that most of us are in a heightened state of awareness — we see babies and pregnant women everywhere _we turn. Add hormones to the mix, and it’s easy to get into troubled water if anyone says even the slightest thing wrong.” — _CheezeFace

What to Say Back : “I wouldn’t call it ‘settling,’ but no, I actually want my own children.”

“Both of you should lose weight. Then you’ll get pregnant for sure.”

“That one hurt! I think it’s best to not say anything at all and just lend a listening ear.” — abvernon

What to Say Back : “We’re trying…in the bedroom, that is!”

“I wish that people would say, ‘It’s great that you want to start a family!’” — Jezebell26

What to Say Back : “Yeah, imagine how much harder it could be when I get older!”

“I tried for two weeks, and BAM, I got pregnant.”

“If you’re this stressed about TTC, you’ll never be able to handle the stress of being a mom.”

“Hugs are way better than this.” — mrshurley10

What to Say Back : “I’d love that kind of stress.”

“I don’t mind if friends or family say they’re praying for me, but asking me if I pray made me very uncomfortable.” — katib77

What to Say Back : “Yes, but would you mind _also _praying for me?”

“Just stop all those fancy treatments — it will happen naturally!”

“Instead, I really appreciate when people say things like ‘when _you are parents’ or ‘when you are pregnant.’ It offers hope.” — _BostonGayGal

What to Say Back : “It’s _not _happening naturally.”

“Um, not exactly. Thank you for your kind words about a very difficult situation! Luckily, I have a great support system. One of my best friends has also struggled with IF, and we have an unspoken rule that we don’t ask about it unless the other brings it up. Some days you just don’t want to talk about it.” — KaliChick

“‘You’re so lucky you don’t have to deal with morning sickness or labor!”

“I don’t think _anyone _enjoys puking their brains out, but suggesting that I should be grateful that I don’t have to deal with those things is insensitive.” — _Mrs.Slick _

What to Say Back : “No one likes getting sick, but if that’s what comes with pregnancy, sign me up!”