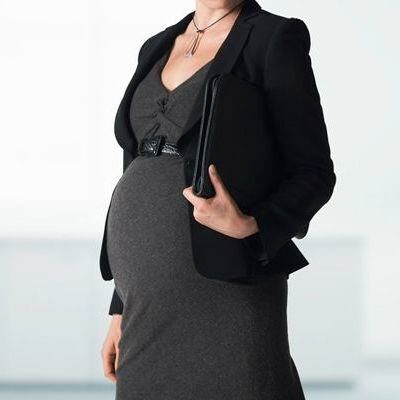 I believe I am an independent and strong woman but I feel that during pregnancy women should get a"free pass." While I don’t think this gives preggo’s carte blanche to act entitled and irritable toward everyone around them, I do think giving them a helping hand is not too much to ask. Let me explain why. In the last few weeks, I’ve been completely dumbfounded by the lack of humanity and respect towards pregnant women today in our society.

My first experience with this attitude happened on a flight from Chicago to Houston for work. I was only traveling for a few days and had a carry-on bag. I figured a carry-on would be easy enough to tote around. Wrong. I had quite a hard time lifting my carry-on in the overhead bin. So much in fact, that I caught the eye of several businessmen who just stared at me as if I were some circus spectacle. Embarrassed and frustrated, I struggled to lift the carry-on and almost hit one of the men in the head. Even after explaining, “I’m pregnant.” One of the men said, “You shouldn’t be lifting that in the first place.” Well, no sh*t, Sherlock. “Well, I’m a woman traveling alone, could someone be so kind to assist me?” No one moved. After some grunting and nearly in tears, the bag was basically thrown in.

It was even more astounding on my return flight home. I thought ahead of time to tell the flight attendant upfront that I needed assistance and even went so far as to explain why getting an extra hand would help me out. Nope. I was told, “You can check your bag. I cannot help you. I’m sure there are some nice strong men abroad that can help you.” For real!? What does a disabled or elderly person do when they have issues getting their carry-on into the overhead? According to my brother — a pilot — they should have assisted me. In the end, rest assured, I found a nice man who was willing to help me out.

Fast forward a few weeks later and I’m on my way to work. (For the record, I take public transportation to the city each day). For no particular reason, my  train is packed. Did I mention it was one of the first really hot and humid days in Chicago? I get on and there are no seats. I walk through the entire train, rubbing my belly in the hopes that someone allows me to sit during the 40 minute ride. Not one person budges. I was annoyed, hot and teetered the entire ride.

I’m not disabled or elderly, but I do think that pregnant women should be given a little more respect. We’re growing a human! So men or women, if you see a visibly pregnant woman standing during your bus or train ride to work, offer them a seat. If you’re own wife, sister, etc… was standing in front of you, would you make them stand? No, probably not.

Have you experienced a similar situation? How did you handle it?