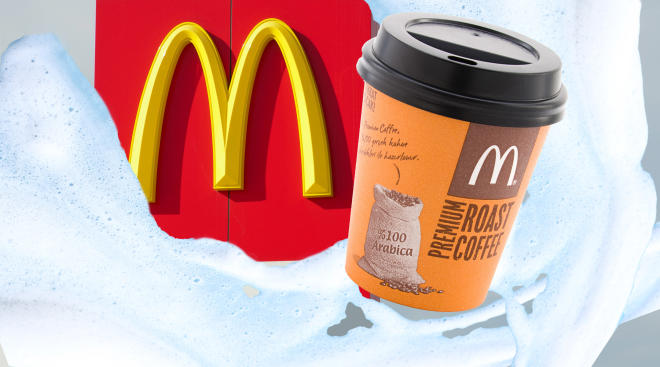 Needing a little pick-me-up, an expectant mother went to McDonald’s for a latte. What she got instead was a cup full of cleaning fluid.

Luckily Sarah Douglas and her baby are both fine. But the event, which occurred at a McDonald’s in Alberta, Canada where Douglas lives, was definitely scary.

Douglas, who is seven months pregnant with her third child, visited the McDonald’s drive-thru on Sunday morning where she ordered a latte from the brand’s McCafé line. (And yes, it’s perfectly fine to have up to 200 mg of caffeine a day during pregnancy.) After she paid and drove off, she took a sip—and sensed right away something was wrong.

“I immediately had to put my hazard lights on and pull over and spit it out and rinse my mouth out with…water," Douglas told CBC/Radio-Canada. “I opened up the lid of the coffee and out poured this pungent smell of chemical. It wasn’t a latte at all.”

In addition to the smell, she says the latte was more of a watery brown color than you’d expect from a milk-filled coffee drink. So she returned to the store and immediately asked to speak to a supervisor, who simply offered her another coffee.

“I said, 'Absolutely not, this is unacceptable,’” Douglas recalls.

Eventually, franchise manager Dan Brown realized two lines of cleaning solution were still attached to the latte machine’s milk line from an earlier cleaning. So instead of milk in her latte, Douglas was served a coffee with a side of harsh chemicals.

The worst part? Douglas learned from a McDonald’s staffer this isn’t the first time something like this has occured at that location. She told Lethbridge News Now that an employee became upset after hearing Douglas speak with the McDonald’s supervisor because “this had happened before.”

Douglas took a photo of the cleaning solution bottle so she could talk to poison control. Citric acid, phosphoric acid, methyl-trimethyl-3, and 2-butoxyethanol were all in there. The label warns that the product could cause serious eye irritation and/or an allergic reaction and cautions users to "Keep out of reach of children. Wear protective gloves/eye protection.”

Fortunately, because Douglas didn’t actually ingest the coffee-chemical solution mix, Douglas and her baby haven’t experienced any ill effects so far (she did see her doctor). And she rightfully got an official apology from the McDonald’s.

“McDonald’s is renowned for its food safety protocols and I am sorry that this happened in my restaurant here in Lethbridge,” Brown said in his written statement. “We have taken immediate action to review the proper cleaning procedures with the team and have put additional signage up as an added reminder.”

Douglas wanted to go public with her story because she didn’t want anyone else to go go through the same terrifying ordeal. She said, “As a mother, I want to make sure I have voice and that I’m being heard in terms of the safety of consumers."