From Graco's record-breaking recalls to Similac's cringe-worthy beetle fiasco, get the scoop on this year’s most surprising recalls. 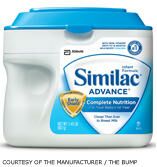 Image: Courtesy of the Manufacturer / The Bump

No, it wasn’t just you. We really did see more baby-gear-related recalls this year than ever before. (Though it’s hard to say if more products are being carelessly made, or more companies are just responding sooner to concerns.) Not sure if you missed one of the top stories this year? Let’s take a look back…

January 20: Graco Recalls 1.5 Million Strollers and Travel Systems
The lowdown: With the first big recall of 2010, Graco declared 1.5 million of its Passage, Alano and Spree strollers and travel systems unsafe and asked parents to stop using them immediately. The announcement came in response to seven different reports of children placing their fingers in the stroller’s canopy hinge, only to have the canopy close on them. According to the Consumer Products and Safety Commission, this resulted in two lacerations and five fingertip amputations.

March 18: Graco Recalls 1.2 Million Harmony High Chairs
The lowdown: The U.S. Consumer Products Safety Commission issued a release declaring Graco Harmony high chairs to have a serious fall hazard, after screws meant to hold the front legs of the high chair in place were found to be faulty. In numerous cases, either the front legs loosened or the rear legs cracked, leading the high chair to be easily toppled over. Though the Harmony was no longer in production at the time of the recall, the recall was issued for consumers who had bought the high chair between November 2003 and December 2009 and may have still been using it.

March 19: Dorel Recalls 20+ Crib Models
The lowdown: After reports surfaced of one death and 10 injured babies, crib manufacturer Dorel Asia recalled over 600,000 of its drop-side and fixed-side cribs. The 20+ models involved in the recall were all found to pose strangulation and suffocation hazards, due to various faulty hardware issues. All in all, over 50 different reports were made about the cribs, which led Dorel to issue a repair kit and strongly urge moms and dads to stop using the cribs in the meantime.

March 24: 1 Million+ Infantino SlingRiders Recalled
The lowdown: After weeks of government warnings about sling safety, the CPSC finally announced an official recall on a baby sling in March — the Infantino SlingRider. The recall was actually the second for the SlingRider in the past three years, and came in response to three infant deaths in the past year alone where the babies died after suffocating in the sling.

April 26: CPSC Recalls Simplicity and Graco Cribs
The lowdown: This was definitely a big day of recalls in the baby crib world. Not only were all drop-side Graco cribs recalled, but all Simplicity crib models – drop-side or not — were also under fire. In the case of Simplicity cribs, the tubular support frame under the crib was found to bend easily, raising the potential for the frame to collapse and the mattress to fold inward on the baby. Meanwhile, the drop side on the LaJobi-manufactured Graco cribs had proven to be so flimsy that it would detach from the crop, resulting in a space between the mattress and the crib that the baby could potentially become trapped in.

September 22: 5 Million Cans of Similac Infant Formula Recalled
The lowdown: Who can forget the infamous beetle recall back in September? Nearly 5 million cans of powdered Similac infant formula had to be pulled from store shelves or tossed in the garbage after beetles were found to have infiltrated the Michigan manufacturing plants where a recent batch had been made. Parents were urged to steer clear of the powdered formula for fear that “bug parts” or larvae (ewww) could be lurking inside the next can of Similac Advance they popped open. Talk about a PR nightmare.

September 30: Fisher-Price Recalls 11 Million Infant & Toddler Toys
The lowdown: Twenty-four separate injury cases showed both infants and toddlers being seriously harmed by using a range of Fisher-Price toys — like the toddler tricycle and the high chair. Most notably, parents were stunned by the injuries caused by the toddler tricycle; six different reports claimed that children who had either sat down accidentally or fallen on the toy ignition key had suffered genital bleeding.

October 20: Graco Recalls 2 Million+ Strollers
The lowdown: Needless to say, 2010 hasn’t been such a good year for Graco. After its huge January stroller recall, its high chair recall in March and then its crib recall back in April, the last thing we expected was to see yet another Graco recall. And then came the biggest one of them all: Over two million Quattro Tour and MetroLite strollers were declared unsafe after causing the deaths of four infants and countless injuries of others. What was behind it all? Apparently, children under the age of 12 months who were not properly strapped into the strollers could find themselves slipping (either on their stomachs or on their backs) out of the stroller and becoming caught between the stroller seat and the feeding tray.