“Eight years, six cardiac catheterizations and four open heart surgeries later, our baby boy is our absolute joy and inspiration and the happiest child in any room.”

These words changed our lives.

On July 17, 2011, when my husband Bryan and I walked into the anatomy scan for our second baby, we expected to hear nothing but “looks perfect.” In fact, my biggest concern was that the ultrasound technician might accidentally reveal the baby’s gender. I knew that the appointment was for more than just learning if we were having a boy or girl (which we didn’t want to know anyway) but the gravity of the anatomy scan had never really sunk in with my first pregnancy, as our first baby was completely healthy.

There was the usual small talk plus my awkward repeating that we didn’t want to know the gender, and then the ultrasound technician said quite calmly, “I’ll be right back.” Bryan and I talked, I bemoaned my full bladder and a few moments later a doctor who I’d never seen before came in. He looked at our baby some more and then said, “We’re going to send you over to the hospital to have a fetal echocardiogram. There might be an issue with your baby’s heart.”

Reading this, your own heart probably just sank. But walking out of the doctor’s office and down to the parking garage that morning, I didn’t know enough to have an exact fear. I didn’t even cry.

We got to the pediatric cardiology floor and were taken to the echo room. The technician was very thorough. Looking at the screen, it looked like a weather radar of blues and reds all over the place. (We’ve since learned, it’s not supposed to look like that.) Once the echo was finished we were ushered into a consultation room where a doctor met us. I quickly reminded him that we didn’t want to know the baby’s gender—I was so determined to keep that sweet surprise safe. He acknowledged my wishes and then explained that our baby had “evolving hypo-plastic left heart syndrome with critical aortic stenosis, severe mitral valve regurgitation and an atrial septum defect.” The prognosis was “probable fetal demise.”

This jumble of defects meant nothing to us, but it doesn’t take an advanced medical degree to understand that “demise” is never a good thing to hear with regards to your child.

After a moment of stunned silence, my husband said, “So what can we do?” The doctor replied, “Well, you can terminate.” At that point the tears that had been noticeably absent all day arrived. Bryan explained that termination wasn’t an option we would exercise. The doctor continued, “You can do nothing and let nature take its course. There’s a less than 10 percent chance your baby will survive to birth with this combination of defects, but if he or she does, then we will offer palliative care for the 7 to 10 days the baby lives.” Bryan calmly but forcefully said, “There HAS to be something else.” The doctor then told us that there was a group in Boston “doing some experimental stuff with limited success.” We thanked him for his time and walked out with a list of the exact issues and a digital copy of the echo. We picked up our 2.5-year-old Henry from his godparents’ and drove home, but we may as well have driven to Mars for how alienated we suddenly felt from our life as we had known it.

That afternoon Bryan Googled the list of congenital heart defects we had learned about hours earlier and “Boston.” The screen loaded with a link to the Advanced Fetal Care Center at Boston Children’s Hospital, and Dr. Wayne Tworetzky specifically. He immediately called and emailed Dr. Tworetzky, and by that evening we were uploading our baby’s echo to a secure link Dr. T provided. There was so much hope flying through the ethernet.

We had an incredible support system. Friends and family rallied around us offering meals, words of encouragement and prayers. Despite all this, it was still such a lonely time. There was a constant tension between what we knew (science) and what we hoped for (faith).

Just shy of a month later, Dr. T determined that we were good candidates for a fetal cardiac intervention (FCI), and we flew to Boston to meet “The Dream Team.”

On August 16, 2011, a team of doctors threaded a hollow needle into my abdomen, then uterus, and into the baby’s chest and heart (the size of a walnut at that point!), where they then inflated a tiny balloon to burst open the sealed aortic valve. Due to a strange twist of events, I ended up being awake with an epidural during the procedure rather than asleep as the previous 139 FCI patients had been.

When my anesthesiologist was adjusting the volume on the headphones, I wasn’t completely honest and indicated that I couldn’t hear anything, when in fact I could. I wanted to know what the doctors said to each other, not just the version they would give us afterwards. We knew the statistics. At that point the numbers were basically equally divided into three groups: They would tell us that either the intervention helped, the intervention was unsuccessful and hadn’t changed the initial outlook or the baby had died shortly after the intervention. Those numbers were sobering. But they were still better than “probable fetal demise.”

After what seemed like forever, and lots of pushing and prodding, I heard one doctor say, “I don’t think we can get it. We’ve been in the baby’s heart too long. It’s not going to happen.” Tears filled my eyes and hope spilled out and ran down my face. Then I heard some of the most beautiful sentences of my life: “This family has traveled from Charleston, they know the risks, this is their only chance. The baby’s heart rate is strong. Try again.” The room seemed to hold its collective breath and the team tried again. The balloon inflated and the valve opened. Success!

Days post-intervention turned into weeks and then months, and at each check-up the baby’s heart seemed ever-so-slightly more healthy. The Fetal Cardiac Center encouraged us to talk to other families whose children had the same intervention, but I was very hesitant. I didn’t need anyone else to insist that everything would be fine when there was no guarantee of that. Managing my own hope was hard enough, so the thought of shouldering anyone else’s was overwhelming. I couldn’t imagine that anything anyone would say would help, but I couldn’t have been more wrong. Talking to someone who had shared a similar experience made all the difference. It didn’t fix our baby’s heart, but it did help mine. Rather than feeling like we were orbiting in space alone, I now felt like we had a tether back to Earth—someone who understood the razor-thin tightrope we were walking between hope and acceptance. 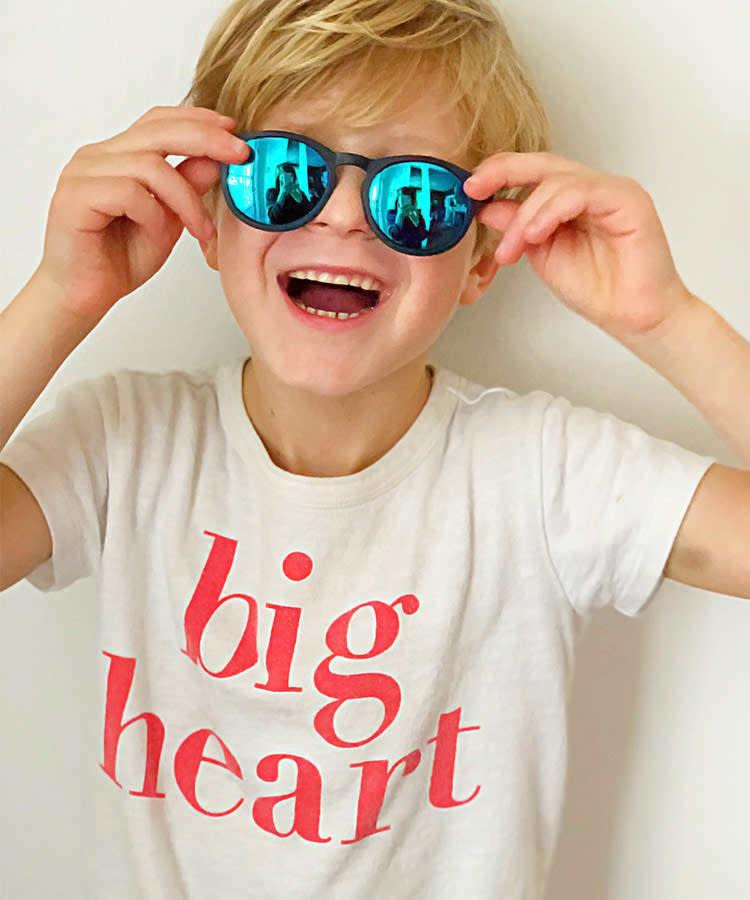 Eight years, six cardiac catheterizations and four open heart surgeries later, our baby boy is our absolute joy and inspiration and the happiest child in any room. He’s the embodiment of brave.

“Probable fetal demise.” These words changed our lives, in the best way imaginable.

See below for Elisabeth’s tips on what to ask during your mid-pregnancy ultrasound: 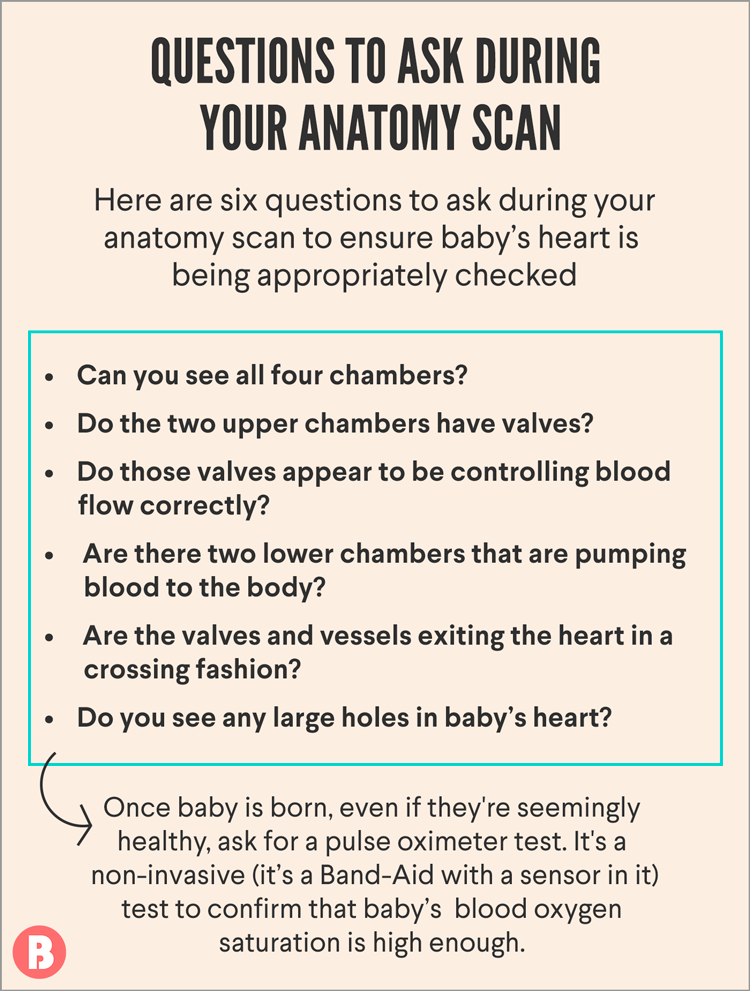 Elisabeth Hunter is a North Carolina native who now calls Charleston, South Carolina home. She is a wife to Bryan and mother to Henry, George and Eloise, and spends most evenings compulsively shopping for vintage baby clothes online. Follow her on Instagram @erob77