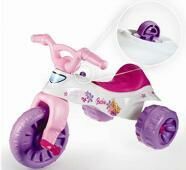 September 30, 2010: Following reports of 24 separate injury cases, Fisher-Price, Inc. has announced a massive recall on 11 million infant and toddler toys across the U.S. and Canada. In seven instances, children suffered injuries on a Fisher-Price high chair that led them to need stitches, while at least six toddlers suffered genital bleeding after either sitting or falling on the plastic ignition key that protrudes from the Fisher-Price toddler tricycle.

But the recall isn’t limited to just Fisher-Price high chairs and toddler tricycles — other items included in the recall range from toys with inflatable balls to Fisher-Price wheelies. To get more info, head to the Consumer Product and Safety Commission’s official site now.