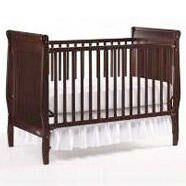 April 26, 2010: This morning, the Consumer Product Safety Commission announced a major recall on all Simplicity cribs and all Graco drop-side cribs.

With Simplicity, the recall affects all cribs with a tubular metal support frame (found in both fixed-side and drop-side cribs), which safety officials found in many cases to have the tendency to bend or detach. In these cases, the mattress was caused to collapse and fold inward, creating a space where baby could become trapped and suffocate or even fall out of the crib. The recall comes in response to more than 13 different reports of similar incidents, as well as one infant death.

The Graco recall affects all LaJobi-manufactured Graco wooden drop-side cribs, which have been found to detach or even completely come loose. This can create a space between the crib mattress and the drop-side where baby can become trapped, leading to strangulation and suffocation. Additional fall risks are also posed. To date, there have been 99 reported cases of incidents related to the faulty drop-side attachment, though thankfully no deaths.

Wondering if you own one of the affected models? Check out the CPSC’s full list of recalled cribs below.

If you have one of the affected models above, the government urges parents to stop using it immediately.

For Graco owners: Contact LaJobi directly at 1- (888) 842-2215 or on the web at  www.LaJobi.com for a free hardware repair kit to disable the drop-side entirely. In the meantime, the CPSC advises parents to try and find another safe sleeping arrangement for baby. Read the CPSC’s official statement on the Graco recall.

For Simplicity owners: Because the manufacturers who made Simplicity are no longer in business, the CPSC advises owners to contact the store where the crib was purchased to receive a refund, replacement crib, or store credit. Read the CPSC’s official statement on the Simplicity recall.

How to Child-Proof Once Baby Is Walking

Childproofing Checklist for a Baby on the Move

Keeping Baby Safe on the Move