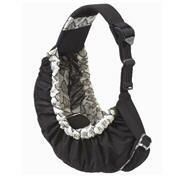 This is the second recall for the SlingRider in three years — the last was announced in 2007 and had to do with fall dangers — and is not relegated to the U.S. alone. In a precautionary move, Canada has also announced a recall on some 15,000 SlingRiders, despite no injuries or deaths having been reported to date.

So what can you do now? If you own an Infantino SlingRider, stop using it immediately and contact Infantino now to receive a free replacement sling of another model, as well as a free rattle for baby. You can contact the company either by phone at (866) 860-1361 (between the hours of 8 a.m. and 4 p.m. PT Monday through Friday) or on their official site, www.Infantino.com.

> Read more of the official statement from the CPSC