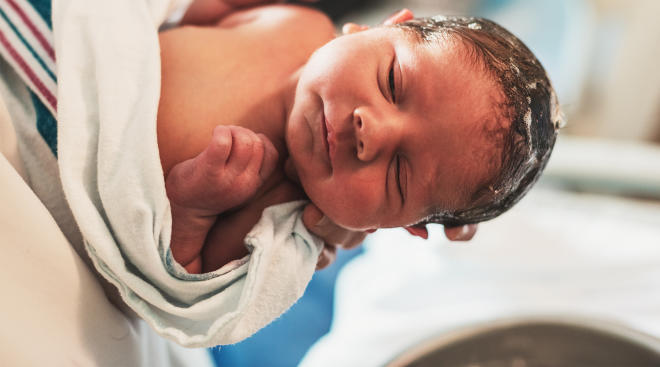 Being born is a messy ordeal; that’s why newborns are traditionally whisked off to a bath within the first few hours of their birth. But recommendations from doctors and changing hospital protocols are proving that the concept of delayed bathing—waiting at least 8 to 12 hours to clean a newborn—is more than just a growing trend of wanting to spend more QT with your newborn.

Bathing babies shortly after birth began when births were moved from homes to hospitals, says Anne Groves, MD, a neonatologist with Advocate BroMenn in Normal, IL. The assumption was that the vernix—the waxy, white substance coating newborns’ skin—needed to be removed, so babies were given sponge baths one to two hours after birth, creating an extended period of time where mother and newborn were separated.

“Babies aren’t born dirty,” says Michael Farmer, MD, Head of the Department of Family Practice at BC Women’s Hospital and Health Centre in British Columbia. “Mother-baby bonding time is very important, and the caregivers would not want to interfere with skin-to-skin time and establishing breastfeeding. Bathing a newborn can certainly wait.”

These doctors aren’t alone in their recommendations. The World Health Organization advises that “bathing should be delayed until after 24 hours of birth.” Along with the WHO, the Association of Women’s Health, Obstetric and Neonatal Nurses (AWHONN) has also published findings that the increased skin-to-skin contact that comes from delaying a bath not only helps with milk production, but is also essential in keeping newborns warm and their blood sugar regulated.

The vernix, which is made mostly (80 percent) of water as well as lipids and protein, is essentially a thin layer protecting a newborn baby from heat loss and risk of hypothermia—a potentially dangerous drop in body temperature. Because this layer keeps babies warm, it also helps regulate their blood sugar and decreases risk of hypoglycemia.

Courtney Buss, RN , of Advocate Sherman Hospital in Elgin, IL, has revealed research that the “rates for babies with hypothermia decreased from 29 to 14 percent in babies whose bathing was delayed, hypoglycemia rates dropped from 21 percent to 7 percent in the first month, and breastfeeding rates increased from 51 percent to 71 percent.” Keep in mind that the AWHONN doesn’t recommend delayed bathing for newborns of mothers with HIV or any of the Hepatitis viruses, to decrease risk to staff and other family members.

If your hospital doesn’t include delayed bathing as part of their newborn protocol, don’t be shy about requesting it yourself—there’s a reason that “new baby” smell is actually a thing!