Why is the US cesarean-delivery rate so astonishingly high? The real reasons may not be what you think.
facebook
twitter
copy link
email
save
ByNatalie Escobar
Updated April 25, 2018 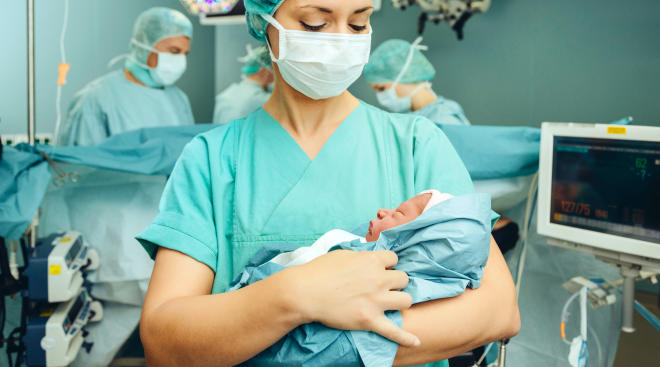 When Farah Diaz-Tello gave birth in a New York hospital in 2007, she had a c-section. It wasn’t because she had a high-risk pregnancy. Nor was it because her baby was breech or had his umbilical cord wrapped around his neck. And it certainly wasn’t because she had wanted one. In fact, she’s not sure why it was done—no one ever explained it to her, even though she asked.

She’s far from alone in experiencing a possibly unnecessary c-section during labor and delivery. About 1 in 3 American babies are born via cesarean. And, according to a 2017 Consumer Reports study, about 26 percent of healthy women with low-risk pregnancies and full-term babies positioned headfirst— and therefore typically considered equipped to deliver vaginally—end up undergoing c-sections. This is well off from the 10 to 15 percent that the World Health Organization considers a “normal rate” for safeguarding against maternal death. Countries with rates that go beyond that, WHO says, don’t show any improvement in birth mortality rates. In the US, how frequently c-sections are performed varies wildly based on the individual state and even within the same city. In California, for example, the c-section rate for low-risk deliveries ranges from 12 to 70 percent, depending on your county and hospital.

Women who undergo unnecessary c-sections are left feeling at best confused; at worst, they feel nothing short of traumatized. While much of the media attention has focused on the moms as a reason for the high rate of c-sections in this country (they’re older and have riskier births, or they’re type A and need to plan everything), the truth is there are many other reasons for the astounding statistic—some of which women can do something about if they hope to avoid an unnecessary c-section.

The Problem with C-Sections

For many moms, c-sections are undeniably an important procedure. Usually, when a surgeon makes the decision to deliver a baby via c-section, it’s done to save both baby’s and mom’s lives. Countless women have stories about c-sections that they absolutely needed for their high-risk pregnancies or unforeseen complications, like a true failure to progress, breech presentation or problems with the placenta.

However, a c-section is a major surgery that typically requires weeks of recovery time. Surgeons cut into layers of tissue and muscle in a sensitive area that can lead to major infections, blood clots or injury to mom’s bowel or bladder.

And yet it’s the most common surgical procedure in the US—one that has skyrocketed over the last few decades. In 1970, the nationwide c-section rate was relatively low, with only 5 percent of women undergoing the procedure, according to the American Congress of Obstetricians and Gynecologists (ACOG). But that national average jumped to 32 percent in 2015–a 540 percent increase over the course of one generation. And 90 percent of mothers who have a cesarean wind up having another for subsequent births, even though vaginal births after cesareans are often safe options for 72 to 76 percent of women.

The invasiveness of the surgery plus its astonishing frequency is what concerns Neel Shah, MD, associate professor of ob-gyn at Harvard Medical School in Boston, who’s been researching the issue over the past decade. “C-sections can save lives when done appropriately,” Shah says. “But when done inappropriately, they can cause a lot of pain and suffering.”

It’s the only operation that requires surgeons to cut on the same scar over and over again if a mom has multiple cesareans. When Shah teaches new interns in his unit how to do a c-section, he says it’s pretty straightforward–at first. But “the second time you do it, it’s a lot more complicated,” he says. It’s even more so the third time around because of the scar tissue.

Experts don’t believe it’s biological need that has hiked up the c-section rates, pointing to the fact that the rates vary so widely from region to region and from hospital to hospital. After all, the nature of women’s pregnancies don’t differ that dramatically based on where they live. And yet, “it turns out that in 2017, a mom’s biggest risk factor for getting a c-section is not her personal preferences or her medical record,” Shah says. “It’s which hospital she goes to.”

As a result, Shah believes, the typical factors blamed for the higher rate don’t seem to make sense. For instance, economists have suggested there might be financial incentives, since doctors and hospitals make more money from c-sections, according to a 2013 paper by the National Bureau of Economic Research. But Shah points out that these reimbursement rates have stayed relatively stable over the past generation; they would have skyrocketed in the past decades right alongside the c-section rates in order to account for the differences. Some authors have also suggested that fears of malpractice suits drive doctors to make interventions earlier. But malpractice lawsuits don’t explain it either, Shah says, because insurance and litigation policies have also stayed relatively stable.

Some look toward shifts in demographics since the 1970s–especially with more moms being older than before and more likely to have conditions like obesity, diabetes or heart disease–to explain why things have changed since then. But in his own research, Shah has seen that c-sections have gone up among 18-year-olds and 35-year-olds alike, so it’s not a matter of age.

Finally, the notion that c-sections are going up because more moms are requesting them is simply not true. Moms aren’t any more likely to request c-sections than they used to, Shah says–only 0.5 percent of moms request a c-section for their first baby.

Shah’s working theory, which is featured in a study published in the journal Obstetrics & Gynecology in July, suggests that hospital design combined with vague protocols create a perfect storm for c-sections.

The rise in c-sections and the huge variations in rates across the country, he believes, can be largely attributed to how delivery rooms are set up and how they operate. In many cases, he says, “You’ve got the most intense treatment environment,” presumably set up so you could be proactive in treating a problem. And yet it’s “the healthiest patients” who are being treated there. Essentially, he explains, that’s like taking 99 percent of American moms and putting them in something that’s like an ICU unit and surrounding them with surgeons. And what’s bound to happen when you’re surrounded by surgeons? “Surgery,” he says.

The layout of the hospital makes a big difference too. Shah’s research has found that the bigger the distance between delivery rooms, the bigger the c-section rates. Higher distances between the call room (where the staff hangs out when they’re not treating patients) and the delivery rooms also predicted higher caesarean rates. In addition, greater delivery-to-room ratios—which leave little patience for a slow labor and delivery process—also affect c-section rates.

Making matters worse, there are no hard and fast rules for when a c-section should be ordered to address a “failure to progress” in labor. Doctors don’t really know how long labor should take, Shah says. There’s really no quantitative way to know if mom and baby are in danger because of how long labor is taking, so doctors’ decisions to perform a c-section are highly subjective. As a result, decisions about when to induce labor and proceed with the operation are all over the map, depending on an individual doctor’s judgment call.

Shah is working to change all that. With his Delivery Decisions Initiative, his multidisciplinary team is trying to design a better way to manage labor and delivery units, including a revamp of the interior design itself and clearer guidelines as to when to intervene if absolutely necessary; for example, c-sections should never be done until a woman is 6 centimeters dilated, he says.

What Women Can Do to Avoid Unneeded C-Sections

If your pregnancy is high risk or you end up with significant complications during labor,then, by all means, get the c-section or whatever else your doctor recommends. But if you’re experiencing a non-eventful, normal pregnancy so far, it’s worth taking steps to maximize the chance that your pregnancy will continue to proceed normally up through delivery. As with anything else in life, this requires some advance planning.

• Research your provider. “It’s important to ask about how often your OB administers c-sections or episiotomies and get concrete numbers,” says Cristen Pascucci, founder of advocacy group Birth Monopoly. “Whatever your choices are, it’s not as easy as walking in and picking off a menu and saying this is what I want and expecting that it’s going to be respected,” she says. “Each doctor has her own style, training and preferences. And this will influence your birth.” Doulas in your community can be a great resource for further information, since they’re the ones who see doctors in action, how births go and how the women are treated. Doulas see firsthand which doctors actually operate by current guidelines and evidence-based practices.

• Check the stats and protocol at your hospital. According to a 2017 Birth Issues article, 73.2 percent of women placed more importance on their choice of provider over their choice of hospital. But as Shah points out, a hospital can have a big influence on whether you end up having a c-section. A 2013 Health Affairs article reports that there’s a 15-fold variation of c-section rates among low-risk women, from 2.4 percent to 36.5 percent in hospitals across the country. Bottom line: Being familiar with your hospital’s c-section rate is as important as researching your provider. You can find it at cesareanrates.com. Hospitals as well as your state’s official website may also provide that information.

• Have an ally with you at the hospital. When Farah Diaz-Tello thinks back to her own labor and postpartum experience, she can think of one thing she lacked but desperately needed when giving birth: support. Your partner is helpful but may be too emotionally involved in the situation to have a clear perspective of what’s going on. A doula or a close friend would be useful advocates in the face of nurses or doctors making decisions for you.

• Educate yourself about labor and delivery. Take a birthing course. Check out the information on the ACOG’s website, including its statement on minimizing intervention. Rebecca Dekker, PhD, RN, APRN, has been leading a lot of trainings for nurses, midwives, doulas and public educators to help families get the best evidence-based care they can. She tells them about the latest research on birthing positions and labor durations, but she also covers something a little more basic: interpersonal skills. “We work a lot on communication techniques and how to get the hospital staff to see you as someone they want to support and help out,” she says. As for Diaz-Tello, who has graduated from law school since the birth of her child, she’s now working in her own legal practice and with groups like the National Advocates for Pregnant Women to educate moms about what they’re going into when they enter the delivery room. “Birth is an unpredictable biological process,” she says. “There’s some degree to which we’re not in control of what our bodies do. It’s unreasonable to expect control. But the feeling of control, the feeling of knowing this is okay, I’m going to be fine, this is what’s happening, can really make the difference for somebody.”

Plus more from The Bump, Gentle C-Sections: