This Is the Time of Day Baby Will Likely Be Born, Study Says

But it depends on the type of birth you wind up having.
ByAshley Edwards Walker
Contributing Writer
PublishedJun 2018 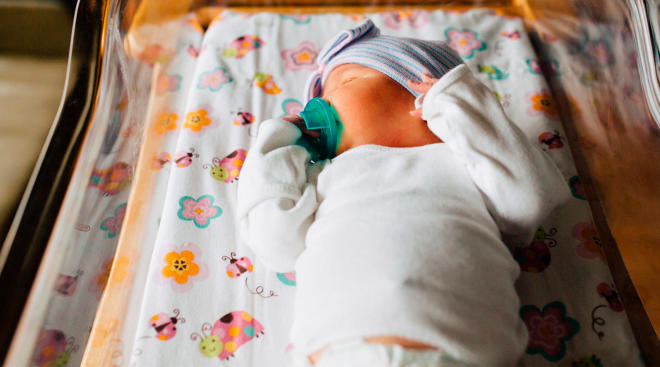 When it comes to childbirth, there are plenty of unknowns. When will you go into labor? How will delivery go? What time will baby be born? Well, a study may be able to help answer that last one.

According to researchers at City, University of London, only 28.5 percent of babies are born between 9 a.m. and 5 p.m. Instead, most babies prefer to make a fashionably late (or early, depending on how you look at it) appearance to the party.

A first-of-its-kind study published in the journal PLOS ONE determined that a whopping 71.5 percent of births occur on weekends, holidays or between the hours of 5 p.m. and 8:59 a.m. on weekdays.

To get their results, researchers analyzed more than 5 million singleton births that took place in England between 2005 and 2014. When it came to spontaneous births, which accounted for just over half of the births included in this study, the majority occurred early in the morning between 1 and 6:59 a.m., with “peak” birthing time happening around 4 a.m.

For women whose labor was induced (about one fifth of the births we’re talking about here), the timing was slightly different. Most of those babies tended to make their appearance around midnight Tuesdays through Saturdays, and on days before a public holiday period.

However, scheduled C-Sections, which accounted for 9.2 percent of the births, were much more likely to take place during normal business hours. Which makes sense, since, you know, they’re scheduled. Those babies typically arrived between 9 and 10:59 a.m.

So what gives with all the overnight births? Peter Martin, the study’s lead author, suggests this biological tendency could stem from how we as humans have evolved to survive.

“Long-term experience and research from other areas has shown that human births without obstetric intervention are most likely to occur at night or in the early hours of the morning,” he says. “This may be part of our evolutionary heritage. Our ancestors lived in groups that were active and dispersed during the day and came together to rest at night. So a nighttime labor and birth probably afforded the mother and newborn baby some protection.”

But one thing that did stump Martin and his team? Whether a birth was spontaneous or not, it appears most babies just don’t want to make their debut on Christmas Day or Boxing Day (December 26th).

“It was not surprising to find that planned caesarean sections are not usually scheduled on holidays,” Martin says. “But it is not straightforward to understand why numbers of spontaneous births, without any obstetric intervention, were lower on Christmas Day and Boxing Day than on other days of the year. Selective obstetric intervention in preceding days could be an explanation but more research would be needed to investigate this.”

Hopefully healthcare providers will use this information “to ensure their services provide women and babies with the best care at the right time,” says Elizabeth Duff, a senior policy adviser at the National Childbirth Trust.

Anticipating the arrival of your own little one? Check out our list of tips and tricks for an easier labor and delivery.