UPDATE: ‘Bun In The Oven’ Couple Give Birth 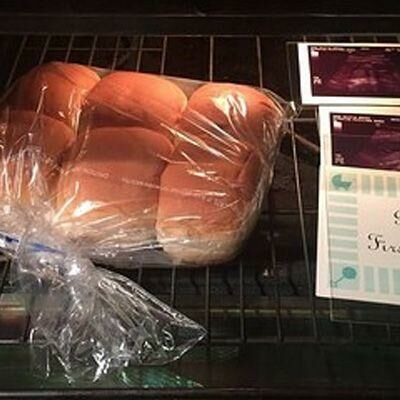 Dana Griffin-Graves and husband Arkell Graves spent 17 years trying to conceive, going through many ups and downs, including a stillbirth and four miscarriages. But in September, after Dana noticed her attempts at weight loss were unsuccessful, she went to the doctor and received some shocking news: She was five months pregnant with a baby boy.

She  surprised her husband with the news by placing her sonogram—along with some buns—in the oven for him to discover. After watching Arkell’s genuinely stunned and emotional reaction to his wife’s bun-in-the-oven pregnancy announcement, we couldn’t help but take part in the waterworks.

But Tuesday morning, after several days of complications, Arkell and Dana announced that because Dana’s health was at risk, it was time to deliver their baby, nearly 16 weeks before her due date.

“Today, our baby will have to be delivered, at 24 weeks and one day. As Dana is in critical care, her body has endured all it can take. We are believing God. It’s always been in His Hands, so we hold on to Him. Please keep us in your prayers today and always. We apologize that we are unable to answer every call, text and message, but please know that we appreciate you. Help us thank Him in advance for the miracle that is about to happen. ‪#‎DeliveryDay ‪#‎KeepPraying”

After thousands of social media posts offering prayers and support, their local television station  8News reported the good news: Dana successfully delivered their son, although his and Dana’s conditions are not yet known. The couple did post a birth announcement to Facebook, explaining the meaning and significance behind their name choice:

While we await more details regarding the delivery and birth, congratulations are in order to Dana and Arkell on their long-awaited addition to the family!