A durable stroller that can handle tough terrain as easily as it glides down a city sidewalk, the City Mini GT will last well into toddlerhood. 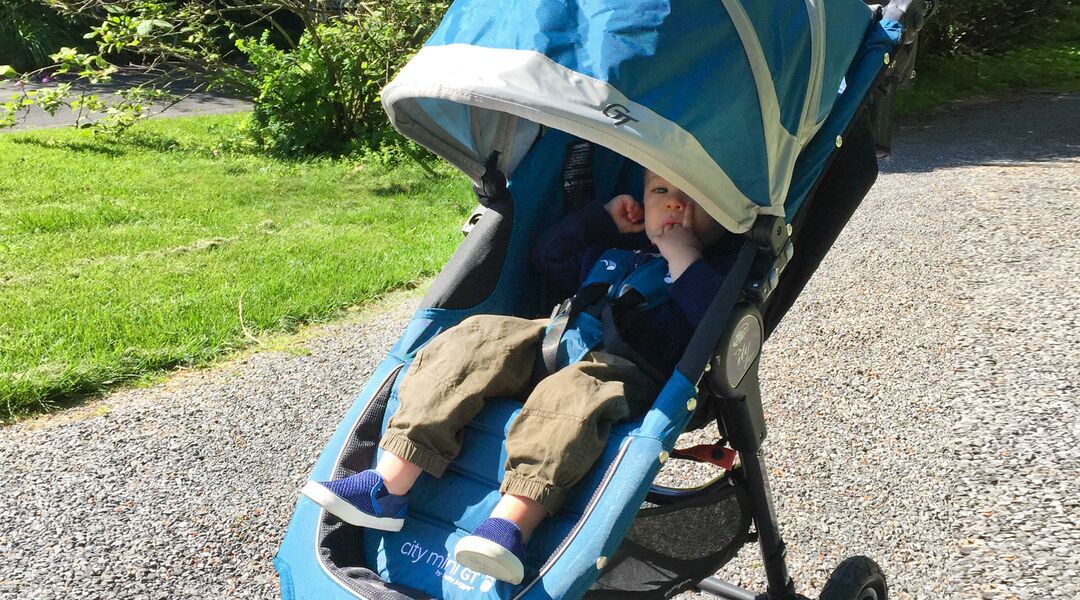 Pros
• Sturdy and built to last
• Heavy-duty tires for off-roading
• Stylish—it gets noticed!

Bottom Line
The Baby Jogger City Mini GT gives you the best of both worlds: the ease and maneuverability of an umbrella stroller with the rugged durability of a larger model. It can take you seamlessly from an urban café to a muddy petting zoo. 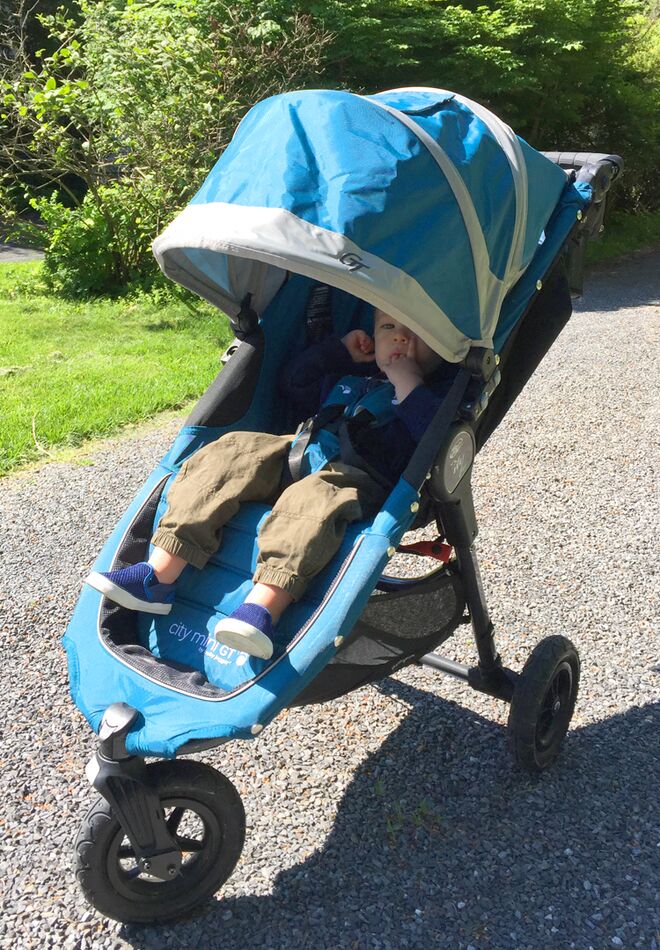 The original City Mini—a basic stroller with a one-handed-fold—is a staple at every playground in America. You know you’ve seen one! I had too, and a lot of my friends raved that it was a great, sturdy set of wheels. I already had a different brand of stroller from my first child and I didn’t want to spring for a new stroller for my second baby—that is, until I walked by a baby boutique and noticed the GT version of the City Mini.

As sidewalk-strolling folks who find ourselves at petting farms, orchards, hilly parks and the beach, we realized a City Mini that could take on rough terrain was exactly what we wanted. We bought it that day—the day before my due date!

Features
The GT has the one-hand fold that City Minis are famous for—you just grab the strap at the center of the seat, pull, and the stroller folds right in half. It’s really that easy. And seriously, what parent has two hands free to fold up a stroller? An auto lock keeps the fold in place for storage or transportation. A one-handed motion also brakes the stroller. Rather than using a foot brake, the GT features a hand brake just below the right side of the handlebar. Just flip it up to activate. 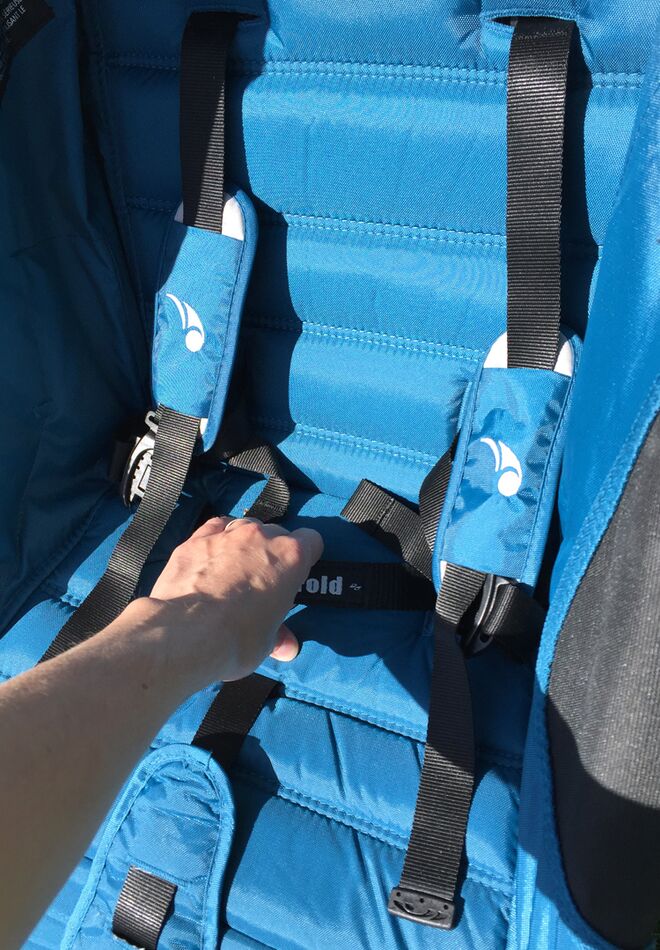 The GT has an adjustable, rubberized handlebar, which can flip up or down so you can reposition it at different angles—great if you and your partner are different heights. The UV 50+ canopy has two peekaboo windows, one in the center and one toward the back, so you can keep a close eye on baby. And it adjusts to several different positions depending on how much shade coverage you want. We actually lost our canopy but thankfully customer service at Baby Jogger was excellent and our warranty covered a new one. 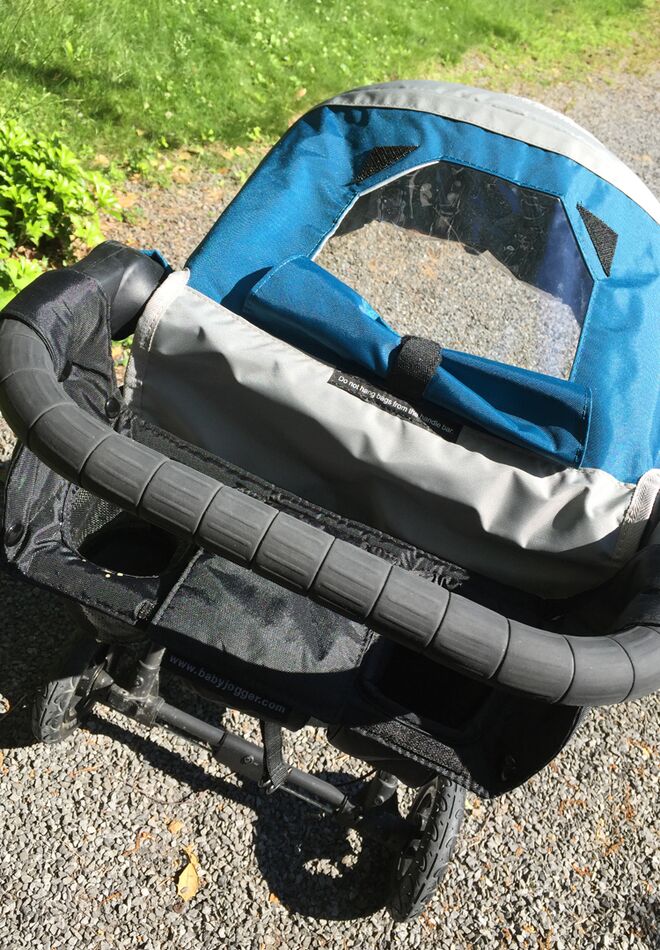 Extras, like the child tray/cup holder ($20), belly bar ($25), parent console ($30), glider board ($85), weather shield ($60) and foot muff ($60), are all sold separately, but that’s part of what keeps the costs low for this stroller. And that way you can customize it to your liking by choosing only the items you think you’ll use.

For the record, this is not a jogging stroller. People ask me all the time because of the name Baby Jogger, which is written on the stroller, and because it has rugged-looking tires. But it’s not. That’s important to note if you’re a runner.

Performance
The City Mini GT offers a seriously smooth ride thanks to great front wheel suspension. Plus, the all-terrain tires are filled with rubber foam, so they don’t ever need to be pumped up. Since we do “off-road” with it, it can get a little muddy, but it’s easy to just hose the entire thing off. 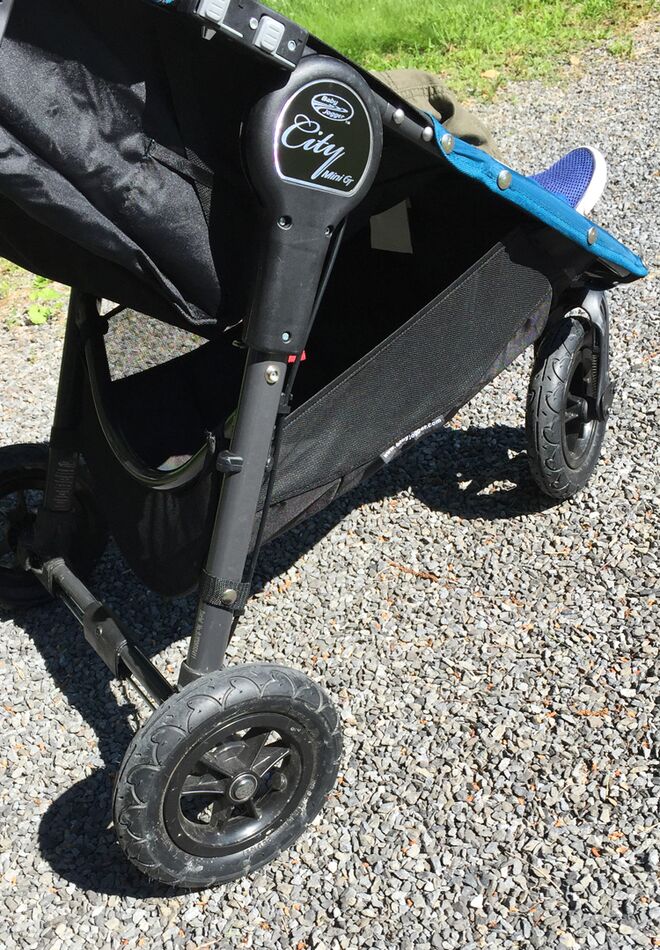 If you’re an expectant parent, note that while the manual indicates the GT can be used from birth, you probably don’t want to put your newborn directly in this stroller. A pram attachment is sold separately ($160 to $200). We used ours with an infant car seat (the Chicco KeyFit 30 we already owned) and an adapter (sold separately for $60). The adapter allows for compatibility with all major car seat brands. I have two minor critiques about this though: Adding the adaptor adds extra size to the folded stroller and the stroller became top heavy with the car seat. I had to be extra careful when going up and down sidewalk ledges to prevent the stroller from tipping over. Baby needs a pram or infant seat for such a short period of time; thankfully the longevity of the GT more than makes up for this inconvenience. It holds up to 65 pounds, and I was shocked when my 4-year-old, who I’d thought had outgrown strollers, took a nap in it on the way to pick up my youngest at day care.

For babies and toddlers who need a nap, though, keep in mind that the recline isn’t fully flat. It goes pretty far but not all the way. And I wish you could make it go a little more upright too–it’s not a fully upright position. I found a small baby tends to slouch a bit while sitting inside. To adjust the seat, which is actually just padded fabric, release a strap from a toggle attached to the top of the seat (beneath the handlebar). To adjust the height of the shoulder straps, you have to pull out the whole strap and rethread it. But you don’t do that often, so it wasn’t a big deal for me.

While the GT is a “Mini,” remember that it’s not as small as an umbrella stroller. At 22.5 pounds and 24 inches wide, to me it’s still a bit big to use as an everyday stroller, especially in narrow city shops with the car seat attached. Comparable everyday strollers are over 25 inches wide, but umbrellas typically fall in the 17- to 20-inch range.

Design
I do think it has a stylish design that gets noticed. In fact we were stopped the other day by someone who asked, “What kind of stroller is that?” The City Mini GT comes in six different colors: steel gray, black, crimson, evergreen, teal and sand/stone.

While the basket underneath isn’t massive, it’s big enough to toss in a few things during a quick grocery run and holds up to 20 pounds. My one big design complaint? The GT doesn’t stand up while folded, so I often have it lying on the ground and I feel like it gets dirtier that way. Plus, it can be a pain to have to bend over to get it, especially if you’re juggling a diaper bag or baby in your arms. 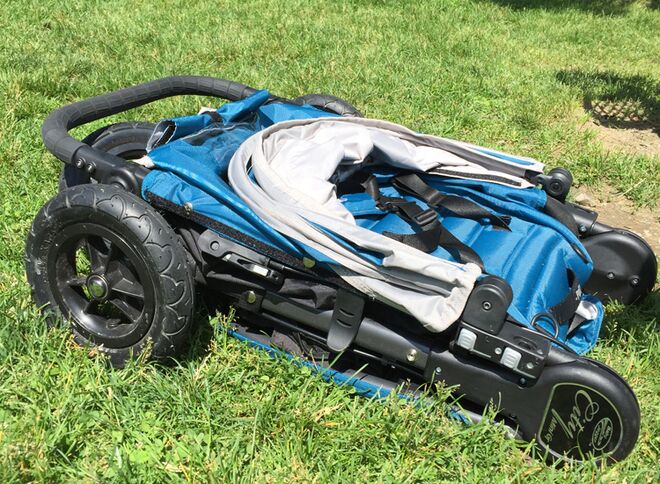 Summary
If you’re looking for a durable stroller that will stand up to rough terrain but won’t weigh you down when you’re in the city, the Baby Jogger City Mini GT Single Stroller is an excellent choice. This is a stroller you’ll use well into toddlerhood. It’s held up well for almost two years in our family, and I see no end in sight!