Decked out with tons of accessories and adjustable features, the Baby Jogger City Select can satisfy all your needs—whether you have one child or three. 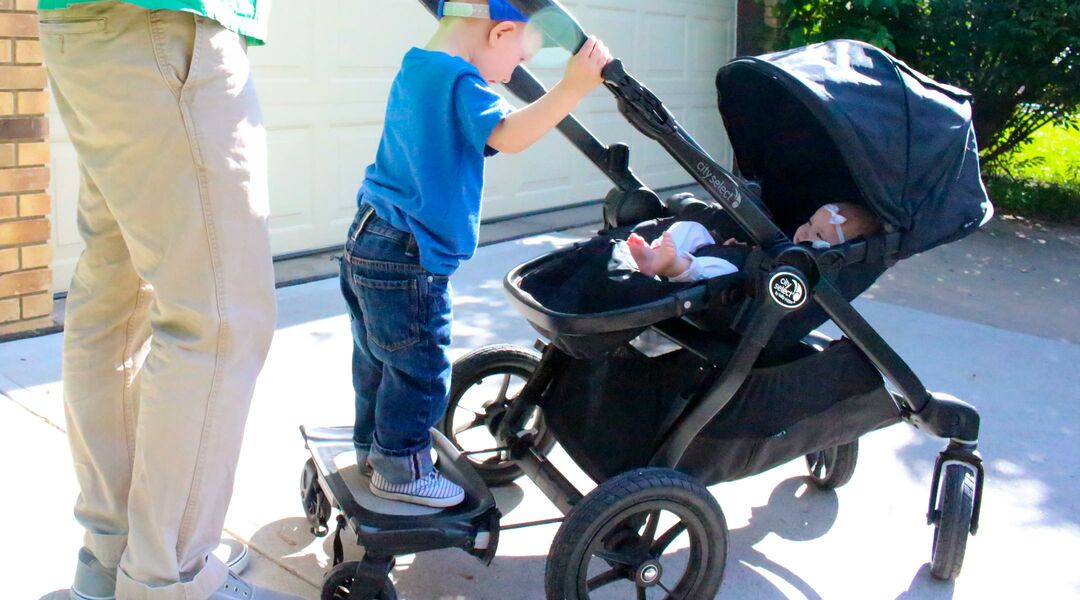 Cons
• Heavy
• Has to be taken apart to fold and stow

Bottom line
With more than 16 configurations and numerous accessories, the Baby Jogger City Select is essentially the only stroller you’ll need for one, two or even three kids. 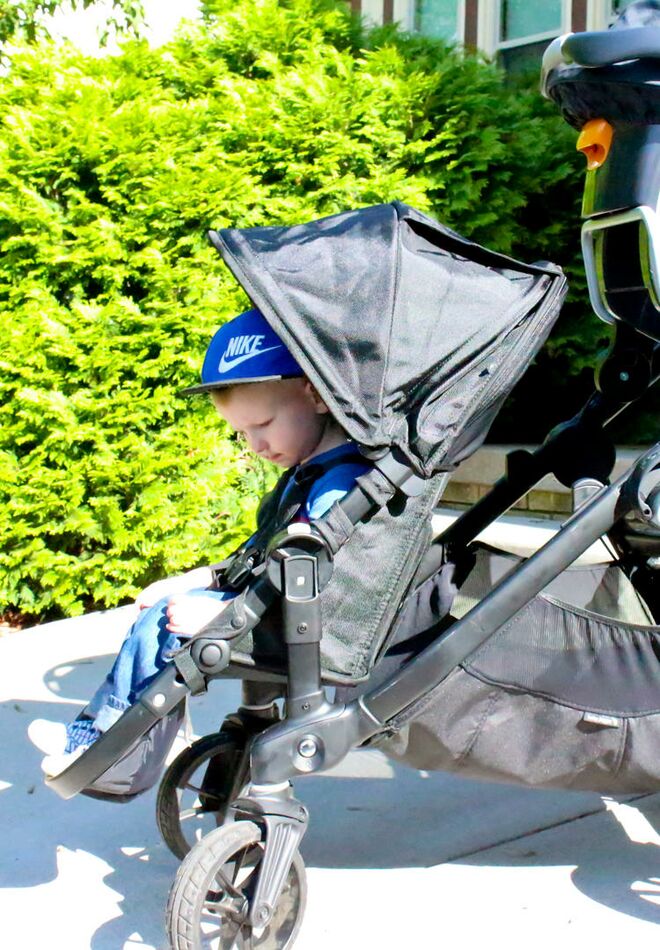 In my mind, purchasing a stroller is one of the most difficult baby gear decisions you’ll have to make in preparation for your new arrival. As a first-time parent with no experience ever using a stroller, I just did what I thought everyone else did and purchased the travel system stroller that went with our infant car seat. After my son was born, the stroller served its purpose for walks around the neighborhood and occasional trips to the zoo, but I never really got much satisfaction from pushing him around in it. It was bulky, heavy and not very easy to maneuver. So, I started researching other options and I fell in love with the City Select. I begged my husband to let me get it, but he couldn’t justify the cost when we already had a perfectly good stroller. A little more than a year went by before we found out we were expecting baby no. 2, and I knew I’d finally be able to change his mind. One weekend we stopped by the store to take it for a test drive, he fell in love with it too, and we left with the stroller of my dreams that day, complete with the second seat kit for when the new baby arrived. 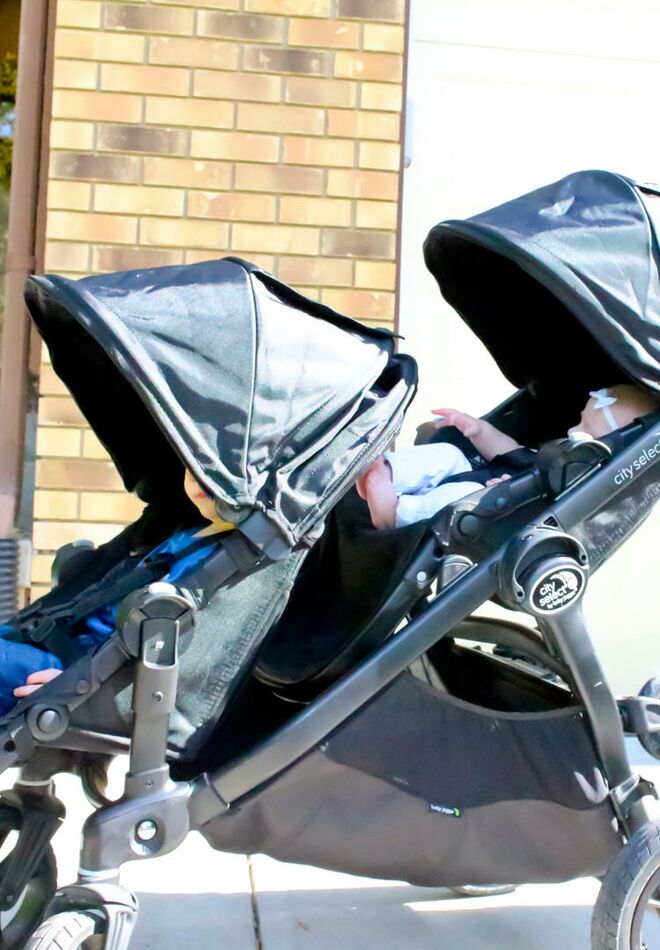 Assembly of the stroller was very straightforward and took us less than 30 minutes. Mostly we just had to attach the wheels and canopy and we were in business.

We used the City Select in single mode for about six months until our daughter was born. In that time we were able to get a good feel for the stroller and all of its great features. It has an adjustable handle that can accommodate any height. My husband and I are fairly average height (I’m 5 feet, 6 inches; he’s 6 feet), but both my mother-in-law (she’s 5 feet, 1 inch) and father-in-law (he’s 6 feet, 3 inches) have pushed this stroller and it was comfortable for both of them too. The brake is hand operated up by a lever near the handlebar. I much prefer this to the foot brakes that are common on many other strollers. No more scuffed shoes!

The front wheels are solid and can rotate or lock in place, while the larger rear wheels are Forever-Air, meaning there’s no need to worry about carrying a pump or extra tubes with you in case of a flat. While we don’t normally use our stroller on terrain rougher than grass and dirt, I have a strong feeling it would handle most any conditions without issue. 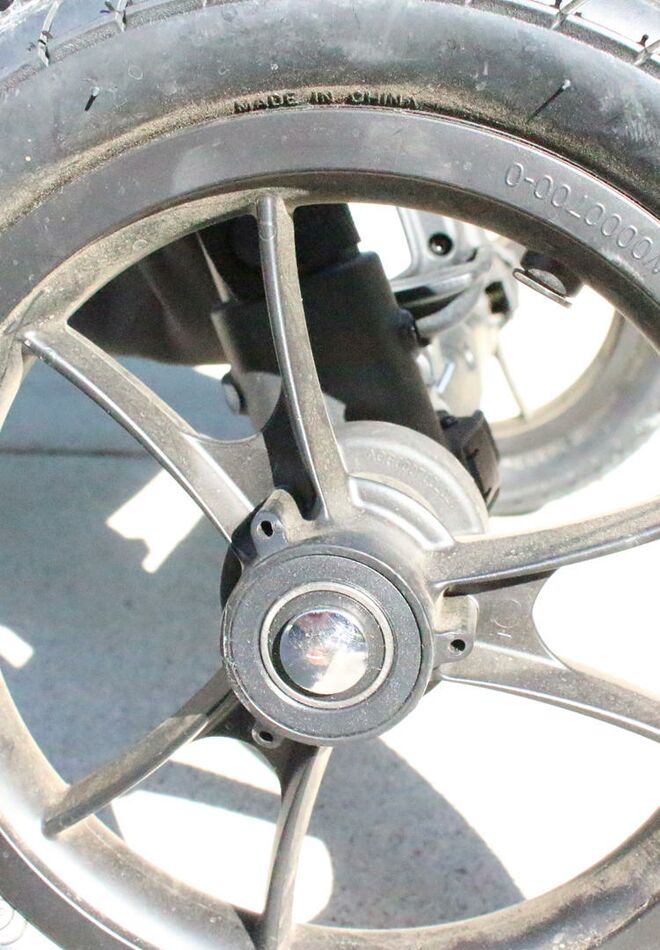 The seat itself seems to be comfortable and includes an adjustable five-point harness for safety. It doesn’t include a belly bar or snack tray out of the box, but both are add-ons if you want to upgrade. The canopy is large and can also be adjusted up or down, depending on the height of your child. I’ve read some criticism that the seat height doesn’t seem to accommodate taller kids, but my son is 35 inches tall at 2 years old and he has no trouble pulling the canopy all the way down without his head touching. Like many strollers, there’s a window on top of the canopy with a flap secured by a magnet, which allows you to check in on baby without disturbing him or her.

I feel my love for this stroller truly blossomed once we had our daughter and were able to use it as a double. In my search for a double stroller, I knew I wanted something that we could also use as a single, not one that’s a side by side. With more than 16 configurations, the City Select has delivered in every way possible. When my daughter was a newborn, we almost exclusively used the car seat adapter with her Chicco KeyFit 30 and had our son facing forward in the front seat. Now that she’s a little bigger and almost able to sit up on her own, we use both seats mostly in a forward-facing position. The seats can also be reclined and turned to face backward. Since she is still small, we haven’t run into an issue with her legs getting cramped behind the front seat, but that’s one thing I can see that might become an issue in the future.

Along with all those configurations, the City Select has a variety of add-on accessories you can buy, from a foot muff to a UV/bug protector. We purchased the infant car seat adapter (from $20) and the Glider Board ($85), which my son is completely obsessed with. And I can’t say that I blame him—honestly I wish they made those for adults! 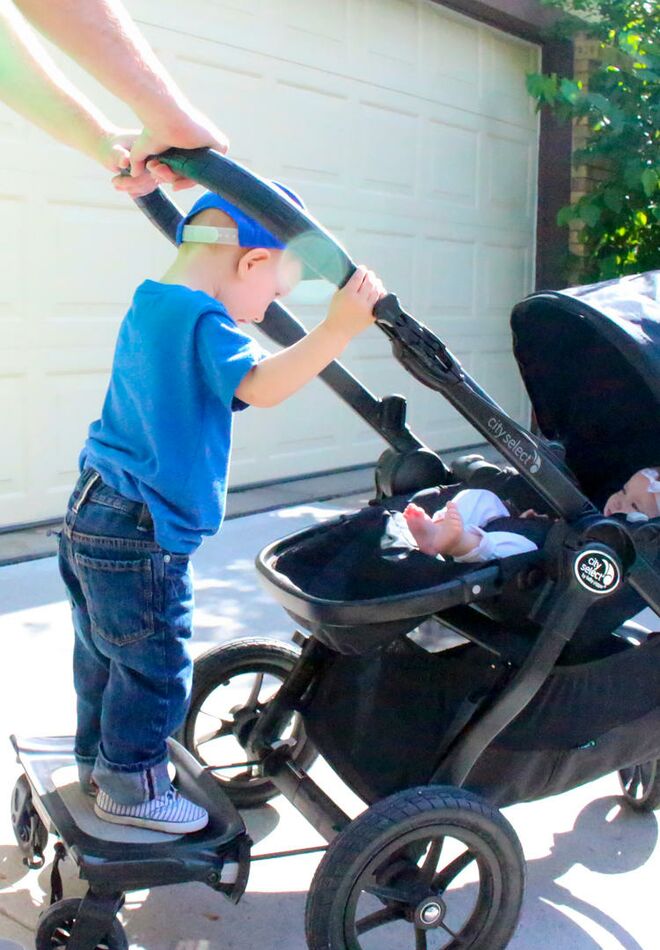 The basket under the City Select is huge—large enough to hold my oversize diaper bag for two, a picnic blanket, and our haul of fruits and veggies from the weekend farmers market with room to spare. It is a bit tricky to access it with both seats and the glider board attached, but still provides more than enough room. 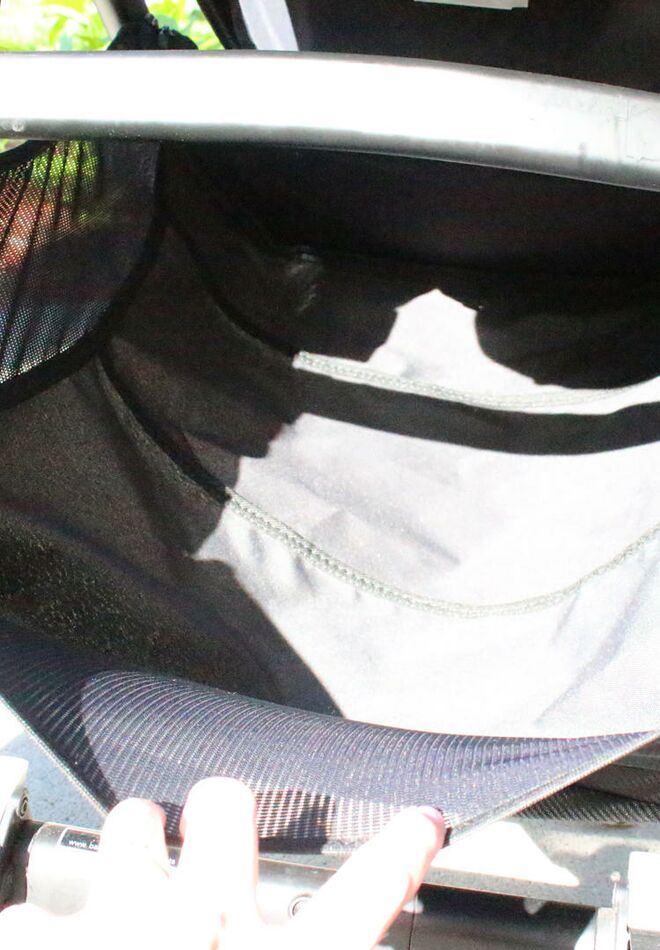 The City Select really has everything I could ever want in a stroller as far as performance goes. The farthest I have pushed the stroller is about four miles on a nature trail, loaded with both kids and all our gear, and had no problems with it. The stroller itself is fairly heavy (about 28 pounds) and a little bulky, but I think that’s a small price to pay for the versatility and performance it offers.

Folding the stroller does require two hands to engage the collapse mechanism, but once you do that it then collapses quickly on its own. Stowing it in my SUV (a 2012 Chevy Traverse) takes up a good amount of space, but since both seats are easily removable, I’m able to pack it into a small space and have no trouble fitting everything in the cargo area of my vehicle even when the third row seat is in use. Two issues I do have when the stroller is folded up for storage: It must be manually locked with the latch on the frame and it doesn’t stand up in the collapsed position, so it takes up room in a closet or wherever you plan to leave it. 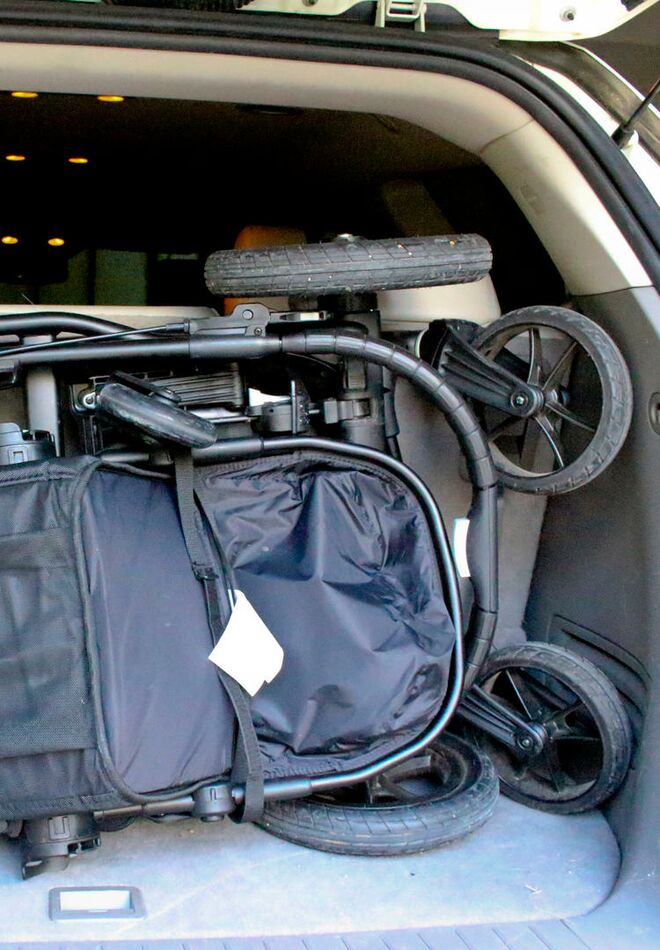 We own the City Select in black with a black frame, but it comes in nine different colors with either a black or silver frame so you can customize it to your liking. We’ve been using it for just under a year and I have yet to really notice any wear or tear. It seems to be holding up really well with use a few times a week. The black fabric does tend to show dirt and dust, but it just wipes off with a damp cloth.

One thing to note is there are a lot of pieces to this stroller, especially when using it with a second seat kit. The kit contains two adapters that hold the front seat above the front wheels, and those must be removed in order to fold the stroller.

The world of strollers is a vast one—there are hundreds, if not thousands, of options, and choosing the right one for your needs can seem to be a daunting task. Having used several different strollers in the past, I can definitively say that the Baby Jogger City Select is a top-notch choice, offering loads of versatility and options, whether you have one, two or even three kids!